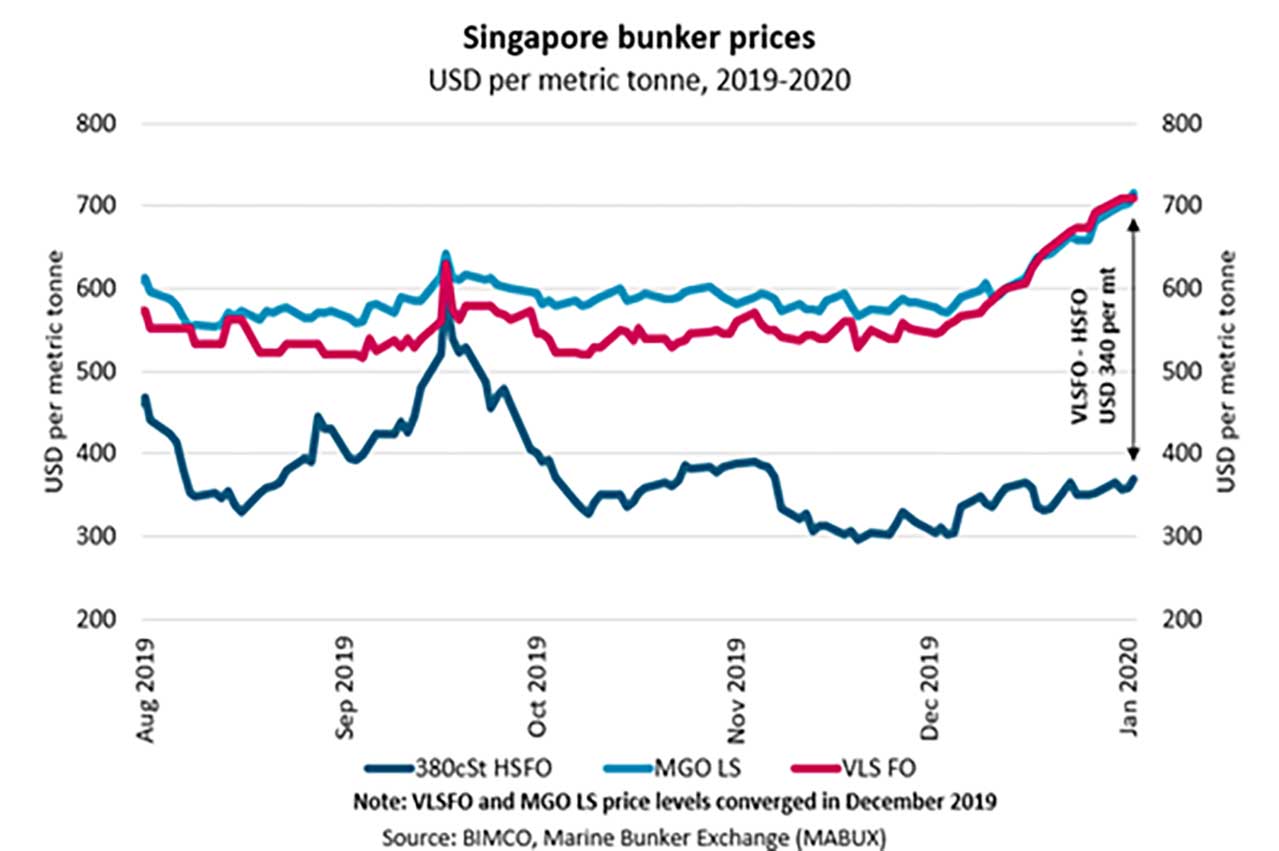 Very-Low Sulphur Fuel Oil (VLSFO) prices have risen to USD 710 per metric tonne in Singapore on 2 January 2020, a price increase of 30%, when compared to 2 December 2019. The newly implemented IMO2020 Sulphur Cap marks a milestone for the industry and is likely to affect profitability for many shipowners and operators.

A new decade has begun, and with the IMO2020 regulation implemented on 1 January 2020, the shipping industry is instantly challenged. In the second half of 2019, the fuel oil price spread between low-sulphur fuel oils, such as Marine Gas Oil Low Sulphur (MGO LS) or VLSFO, and High Sulphur Fuel Oil (HSFO) widened significantly, mostly due to the price volatility of HSFO.

Translating the VLSFO – HSFO price spread into shipping terms, a ship burning 20 metric tonnes of fuel per day will effectively double its daily fuel costs from USD 7,400 per day to USD 14,200 per day when switching from HSFO to VLSFO. Such an uptick in fuel oil costs will surely have financial implications for many companies.

Low-sulphur fuels converging towards price parity in Singapore
To accommodate the higher demand for low-sulphur fuels, VLSFO emerged in the second half of 2019 in ports around the world. Although VLSFO is a relatively new product in the market, it is regarded as a viable alternative to MGO LS, as VLSFO has traditionally been sold at a price discount in the range of USD 20-60 per metric tonne in Singapore.

However, for the time being, the VLSFO to MGO LS discount has vanished in Singapore with both bunker fuels currently sold at around USD 700 per metric tonne. With such a price convergence, the apparent advantage of VLSFO goes out the window.

Bunker suppliers are seemingly leveraging the IMO2020 regulation to their benefit. As the industry moves away from HSFO, the suppliers can command a substantial price premium for the low-sulphur fuels. Low supplies of low-sulphur fuels could also affect the pricing mechanisms locally.

Whatever the underlying cause, the price levels for VLSFO and MGO LS have risen respectively by 30% and 24% from start of December to the start of January. Such price increases are quite extraordinary for the low-sulphur fuels, which have been trading at relatively stable levels throughout 2019, as opposed to the more volatile HSFO.

Shipowners are most likely to be able to pass on the additional costs associated with IMO2020 compliance when the balance of the underlying freight markets are favourable to them. With supply growth outpacing that of demand in all the major shipping markets, this is not currently the case. If current fuel prices are anything to go by, then the widening spread could have dire consequences for many shipowners, as many must carry the additional costs themselves.

Highlights availability of new CIMAS guideline on mitigating issues in the supply chain and on-board ships.