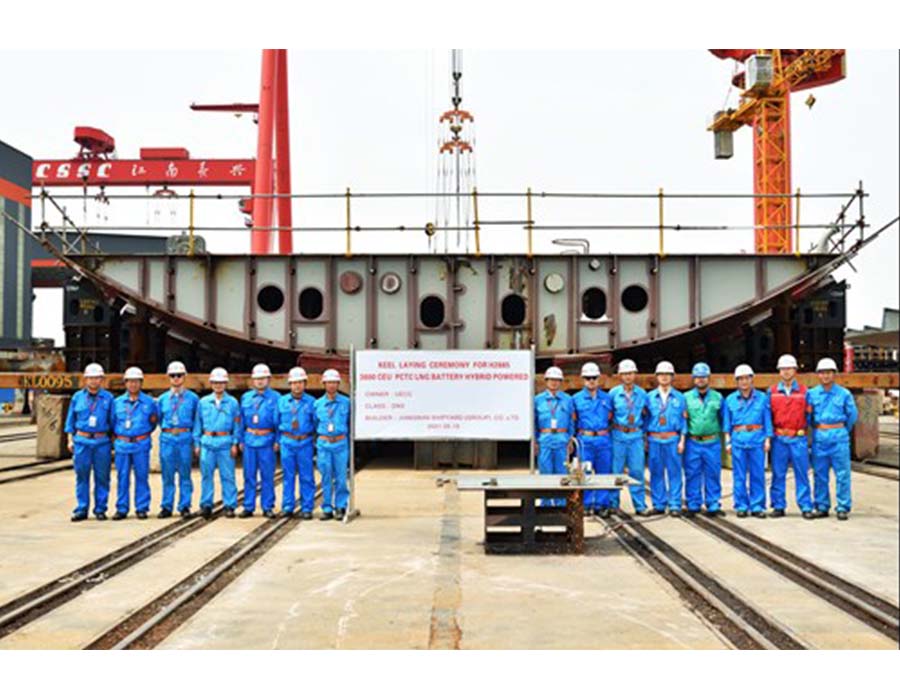 Construction of the third in a series of newbuild liquefied natural gas (LNG) battery hybrid PCTCs (pure car, truck carriers) for United European Car Carriers (UECC) reached a significant milestone this week with keel-laying at a Chinese yard, it said on Thursday (20 May).

The ceremony at Shanghai’s Jiangnan Shipyard saw the laying of the keel for the hull designated H2665 as part of a newbuild programme in which UECC is developing the first-ever vessels to run on hybrid propulsion power fuelled by LNG.

“When they hit the water, these state-of-the-art vessels will represent a sea change for the industry by using available LNG technology to drastically cut emissions on short sea shipping in Europe,” says UECC chief executive Glenn Edvardsen.

The first newbuild is due for delivery later in 2021 after being launched at the yard last month, with the second and third vessels set to be delivered in the first half of 2022.

Edvardsen says the trio represent “a giant leap towards decarbonisation” as the use of a battery hybrid solution will take UECC beyond the IMO target of a 40% reduction in carbon intensity from 2008 levels by 2030. The three vessels will also meet the IMO’s Tier 3 NOx emissions limitations entering into force in the Baltic Sea and North Sea from keel lays this year.

This will enable them to recharge batteries while at sea using a shaft generator in order to use
battery power for manoeuvring in ports in line with port requirements to cut emissions.

Emissions of carbon dioxide will be reduced by around 25%, SOx and particulate matter by 90% and NOx by 85% from the use of LNG, which is also affordable and widely available through an existing bunkering network.

In addition, the next-generation newbuild trio will be equipped with dual-fuel engines for main propulsion and auxiliaries that will also be able to use carbon-neutral and synthetic drop-in fuels as these become commercially available in the future.

“UECC is taking the initiative in the industry to achieve decarbonisation using currently available technologies, rather than waiting for the perfect solution,” Edvardsen says.

“At the same time, these vessels will be highly cost competitive due to operational efficiency and reduced fuel costs.”

He adds that being able to offer eco-friendly ship operations will be a key differentiating factor in winning cargo contracts in the future shipping market due to increased pressure from regulators, port authorities and clients.

With an overall length of 169 meters, a width of 28 meters and a car carrying capacity of 3,600 units on 10 cargo decks, the new vessels are highly flexible, enabling them to accommodate a wide range of high & heavy and break-bulk cargoes, in addition to cars and trucks.

The addition of the three newbuilds will give UECC five eco-friendly vessels – including two dual-fuel LNG-powered PCTCs already on the water – out of its 17-vessel fleet.

“No other short sea company, or deep sea for that matter, can demonstrate such a sustainable
fleet,” Edvardsen says.

He adds UECC is “investing in the future” with backing from parents NYK and Wallenius Lines that “have sustainability in their DNA”.

Decarbonisation move supports both companies’ ambitions to significantly reduce the carbon footprint of European transportation and reduce the environmental impact of shipping.

Europe’s ports will therefore support the EU approach to closely monitor and evaluate whether sufficient progress is being made on the international level by 2023.

‘We believe that Iceland should completely ban HFO use and carriage as fuel in its territorial waters,’ states spokesman.