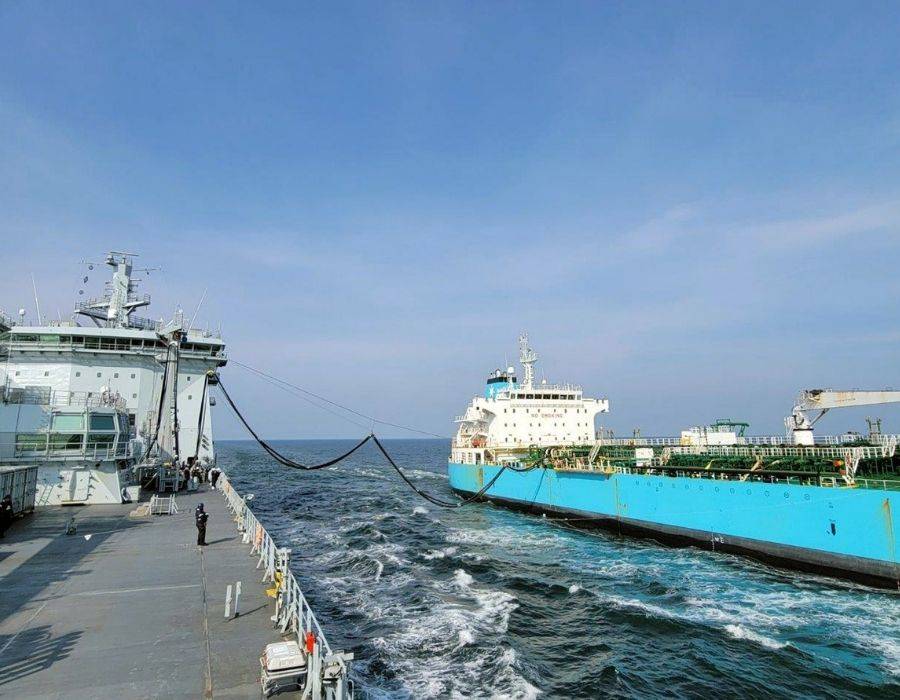 The Royal Navy on Wednesday (11 May) said the Royal Fleet Auxiliary ship Tidesurge – which is typically found in a Royal Navy task group to keep fuel tanks topped up – linked up with the civilian MT Maersk Peary in Lyme Bay to see whether oil could be transferred between the two vessels.

Calling upon civilian oilers to sustain the fleet could prove crucial if the military tankers are unable to stock up on supplies by putting into port.

The Royal Navy relied on extensive support from civilian tankers during the Falklands conflict 40 years ago – sustaining a task group 9,000 miles from the UK.

But in more recent years, that support has not been needed, nor training practised.

The Royal Fleet Auxiliary – whose ships support and supply Royal Navy warships on operations around the globe – joined forces with its American counterpart, US Military Sealift Command, who chartered the Peary for the trials.

The resulting link-up in the Channel – known as a Replenishment at Sea or RAS in naval parlance – saw the refuelling rig from Tidesurge successfully sent across to the Peary where it hooked-up with its replenishment station.

Although no fuel passed between the two ships, the successful connection proved the ability of the civilian tanker to connect with a military vessel.

The trial’s success extends between the two support forces to the rest of NATO as equipment is largely standard across the alliance.

“Replenishment at sea from a commercial tanker to a Fleet Replenishment Oiler can ensure our navies remain supplied and supported in a contested environment when port visits for resupply can’t be accomplished,” said Captain Douglas Jaarsma, the US MSC Exchange Officer with the RFA.

Captain Sam Shattock, the RFA Chief Operator involved with the trials, said: “This exciting trial is the first step for the Royal Navy in developing an organic national capability to consolidate Fleet Replenishment Oilers from commercial vessels. It has delivered assurance to both nations that the ability to work together remains a key tenet of our operational outputs.”

‘Shipping, particularly seafarers, cannot be collateral victims in a larger political and military crisis – they must be safe and secure,’ says Secretary-General.