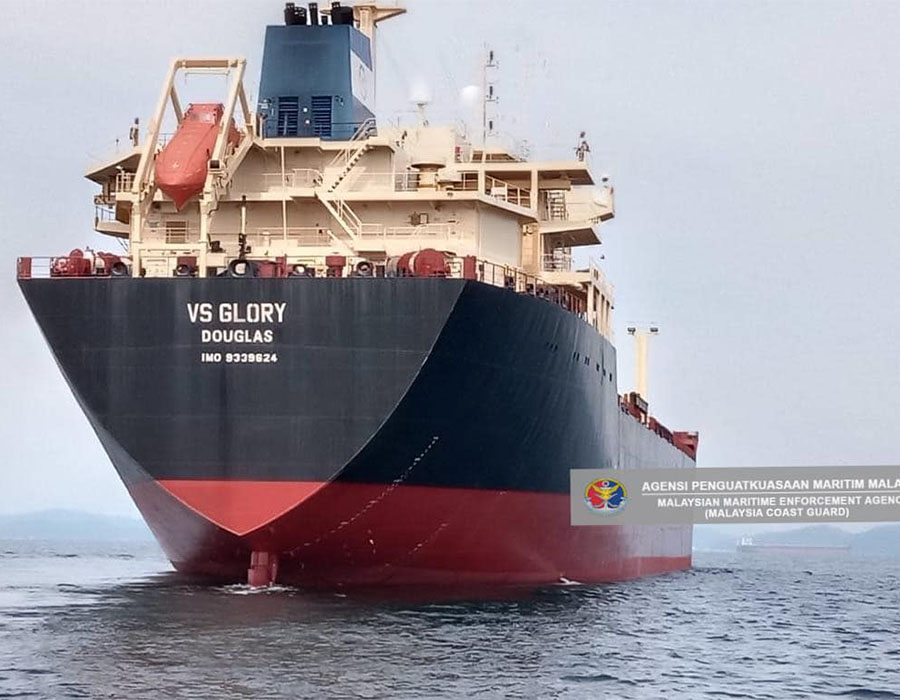 The Maritime Malaysia Enforcement Agency (MMEA) on Wednesday (12 January) said it has detained tanker VS Glory and cargo ship Lorraine over separate alleged illegal anchoring incidents in waters off respective states of Perak and Selangor.

The Germany-registered, 171-metre VS Glory was spotted by authorities at 30.7 nautical miles southeast of Pangkor island in Perak at 11.15 am on 10 January, according to Maritime Director of the State of Perak, Captain Maritim Shahrizan bin Raman.

The ship is operated by a Captain with the assistance of 18 crew members consisting of Russians, Ukraine, Romania and the Philippines aged between 28 to 63 years old.

All crew members of the ship were detained at ‘South East Point’ (SEP) Pangkor Island for further investigation and action. Separately, the State of Selangor detained cargo ship Lorraine in the waters of Kuala Selangor around 4.20 pm on Tuesday.

The vessel was discovered by Area Control Centre (ACC) Klang to be at 22 nautical miles southwest of Sekinchan at 10.55 am.

Patrol boat KM Bagan Datuk, which was in the vicinity, was sent to the location to inspect the ship, shared Selangor State Maritime Director, Maritime Captain Mohammad Rosli bin Kassim.

An initial inspection found Lorraine to be operated by 22 crew consisting of Chinese, Indian and Romanian citizens whom all had a valid self-identification documentation.

However, authorities found the ship’s Captain not submitting any documents to Malaysia’s sea department for permission to anchor.

As such, a detention order on the ship was issued and two crew was taken to the Selangor State Maritime Headquarters for further investigation.

If found guilty of offences under Section 491B(1)(l) of the Merchant Shipping Ordinance 1952, individuals may be fined not exceeding RM 100,000 or face an imprisonment term of not more than two years, or both. Starts a collaboration agreement to carry out feasibility study of dual-fuel engines using ammonia as the main fuel with LNG as the alternative fuel.