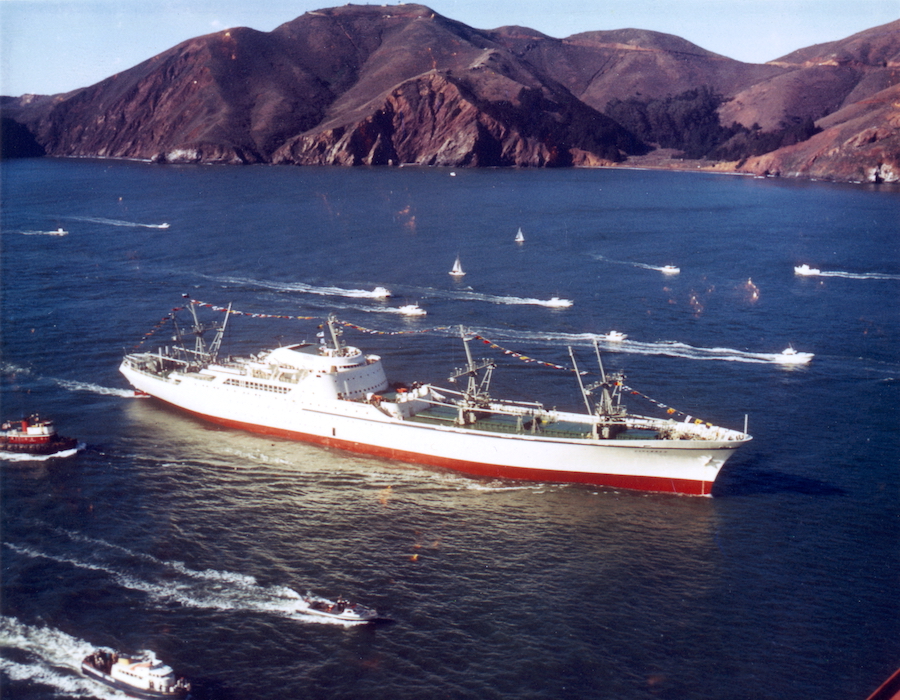 Christopher Chan, Hong Kong head of shipping, offshore and logistics, and Derek Tam, Trainee Solicitor, at global law firm HFW, recently shared an article with Singapore bunkering publication Manifold Times. It analyses the likelihood of nuclear merchant ships re-emerging in the shipping industry and what mechanisms should be in place for it to happen:

The shipping industry once hyped for nuclear merchant vessels back in the 1950s after the visually stunning NS Savannah first set sail. Now, the nuclear option for maritime use is getting a revival amidst global efforts towards decarbonisation. The industry should expect the alternative power source to face various hurdles ahead, but existing fuel suppliers should start taking note of the potential challenge.

Nuclear advocates will need to be very convincing on costs

The first and foremost hurdle to the nuclear option is costs. The costs of installing and maintaining a nuclear plant on board are not known for being modest. The traditional pressurized water reactor requires maintaining high pressure and the nuclear waste generated from the power plant must be very carefully dealt with. Back in NS Savannah‘s time, a separate service vessel was even needed just to receive and deal with the waste.  Hefty costs are one of the reasons why the technology has been restricted in application, and will certainly be one high hurdle standing in the way of any latest nuclear propulsion technology.

The industry must take into account the necessity for and costs of specialised port facilities and staff. Due to the different natures of nuclear fuel and carbon-based fuels, bunkering facilities for current vessels are unlikely to be fully suitable for replenishing nuclear materials.  Although latest development suggests that a well-developed design of nuclear propeller might not require refueling in a decade (or even decades), this does not negate the fact that replenishing work (and the corresponding disposal of nuclear waste from the ship) will eventually be necessary. To cope with the nuclear option, current port personnel will have to be trained specifically for handling nuclear materials.

Also, if the shipping industry intends to adopt the nuclear option as the universal power source in the long run, the global community must devote collective efforts to constructing such specialised facilities at key ports across the globe before nuclear merchant ships could sail worldwide.

Needless to say, the present public perception of nuclear energy is anything but helpful for the energy’s future. Political opinion on the sensitive subject of nuclear power will likely be strong and any future ports for nuclear ships may have to stay remote from city centres due to public pressure. This will confer additional costs indirectly on the shipping industry, not to mention the non-monetary effort required to lobby for favourable local legislations.

Due to public concern and political reasons, nuclear merchant ships may find themselves difficult to be accepted by some ports. For example, as of today, the Hong Kong Shipping Register, the authority for one of the oft-used flags, expressly states that nuclear ships are not registrable. This reflects that some jurisdictions may be quite reluctant to accept nuclear ships. In terms of securing port entry, Regulation 11 of Chapter VIII of the International Convention for the Safety of Life at Sea (SOLAS), 1974, also provides that nuclear ships may be subject to ports’ special control before gaining entry. The administrative costs involved in securing port entry and the risk of dispute arising from denied entry should be noted.

A specific risk and liability framework will be vital

Liability is yet another issue. The Convention on the Liability of Operators of Nuclear Ships signed in 1962 was not supported by major players in the nuclear field such as the United States and the Soviet Union, and has not been ratified by many signatories. Under this 1962 Convention, the operator of a nuclear ship would be absolutely liable, up to a maximum liability of 1,500 million francs for each nuclear incident. The limitation period for any claims for nuclear damage under the 1962 Convention is 10 years – a considerably longer period compared to usual collision claims.

One may be wondering whether other existing conventions cover nuclear damage – the answer is likely in the negative. For instance, Article 3 of the Convention of Limitation of Liability for Maritime Claims (LLMC), 1976, expressly provides that claims against shipowners of nuclear ships for nuclear damage are excluded from the regime. The International Convention for the Prevention of Pollution from Ships (MARPOL), 1973, also does not cover nuclear pollution from nuclear ships.

Given the status of the existing framework as mentioned, an updated global consensus on the risk and liability framework specific to nuclear merchant ships will be necessary if the energy is to become a trusted power source among shipowners. The negotiation for a specific framework takes time and is unlikely to happen anytime soon before any latest technological breakthrough proves to be promising enough.

In terms of safety standards, Chapter VIII of SOLAS and the Code of Safety for Nuclear Merchant Ships do provide some general guidance on safety standards of nuclear ships.  However, decades have passed since their enactment and updating will be necessary if they are to comprehensively cover latest developments (such as Core Power’s maritime molten salt reactor). This stage requires heavy input from nuclear engineers but should be a relatively quick process if the world is already convinced of the workability of certain new designs.

Although the above hurdles are likely to keep the nuclear option a mere interest for quite some time, if a satisfactory risk and liability framework is laid down and upon a few successful test voyages, the nuclear option will truly gain momentum. Members of the shipping sector should be prepared to embrace the impact.

Some stakeholders have expressed worries that a full implementation of the nuclear option would devastate some industry members. Such worries might come true if the latest nuclear propeller could indeed generate power on board for decades without refueling. If such a maritime power source goes worldwide, existing suppliers of shipping fuels will be the first to receive the impact.

Members of the shipping industry who are heavily invested in carbon-based fuels should closely monitor the development of the nuclear option. If the commercialised design of a maritime nuclear propeller proves to be workable, the relevant members should be prepared for a drastic change in maritime fuel usage pattern in the decades to come.

‘A vision like this can be turned into reality [...] but we will need a partnership between research institutions, governments, regulators and businesses,’ said deputy CEO.

Free to access AFI platform is a valuable resource for owners and operators conducting research.

SolarDuck and Voyex enter partnership to use hydrogen as bunker fuel to make inland shipping more sustainable; testing will commence in April 2021.

Maersk which operates the world’s largest container vessel fleet announced its first carbon-neutral vessel launched in 2023 will be a methanol dual fuel ship.