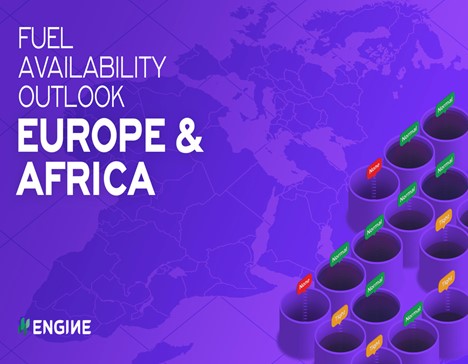 More suppliers can now offer prompt deliveries of LSMGO in the ARA hub, while VLSFO and HSFO availability is slightly tight, sources say. Some suppliers are running low on fuel oil in storage and await resupply, sources say.

Recommended lead times for VLSFO and HSFO in Rotterdam are 5-7 days, while LSMGO requires a shorter duration of three days, they say.

Independently held fuel oil inventories in the ARA slipped to their lowest level since June, according to Global Insights. The stocks decreased by 250,000 bbls to 6.91 million bbls in the week to 22 September, the data showed.

Signs of higher exports and dwindling Russian inflows could have contributed to the most recent stock draw in the ARA.

Russian fuel oil imports accounted for about a quarter of the ARA’s fuel oil imports in July, but nothing was imported throughout August or so far this month, according to Vortexa. The cargo tracker has instead picked up fuel oil cargoes flowing into the ARA from the UK, Germany, France, Greece, Saudi Arabia and other sources. The UK has been the biggest exporter to the ARA since last month.

Three of TotalEnergies’ refineries in France are facing three-day strike action over pay disputes with workers. Currently, there is no impact on bunker fuel supplies to most ports in France, a source says. But prompt availability is said to be tight in Marseille.

Supply of VLSFO and LSMGO is normal off Skaw, while HSFO is slightly tight for prompt delivery, a source says.

Bunker operations resumed in Gibraltar late last week. This has eased some congestion in the nearby ports of Algeciras, Ceuta and Las Palmas. Bunker calls were diverted from Gibraltar to these ports while bunkering was suspended last week.

Bunkering was halted in Gibraltar last week as local authorities were working to clear debris and an oil sheen formed by residual fuel oil from the recently damaged OS 35 bulk carrier.

There is a forecast of strong winds in Gibraltar on Thursday, which could cause some disruptions.

Fuel availability is said to be normal across most ports in the Gibraltar Strait, but some suppliers are experiencing delays due to bunker backlogs from last week, sources say. Three suppliers in Algeciras, and one each in Gibraltar and Ceuta are running behind schedule.

Recommended lead times for all fuel grades in Gibraltar Strait are 3-5 days, a source says. Offer prices are typically valid for 10 minutes amid volatility.

No backlog has been reported in Malta this week, according to Seatrans Shipping agency. 12 vessels were scheduled to arrive for bunkers in Malta on Tuesday, up from eight on Monday. Bunker supply across all grades is normal in Malta, with some suppliers offering prompt deliveries, a source says.

In the Greek port of Piraeus, suppliers can offer limited quantities of VLSFO, LSMGO and HSFO for prompt dates.

Bunker operations have been suspended in Algoa Bay since Tuesday due to strong winds and heavy swells, according to Rennies Ships Agency.

Waves of up to 3.5 metres hit Algoa Bay on Tuesday, disrupting bunker deliveries. Waves are forecast to recede on Thursday, which could allow bunkering to resume then.

Seven vessels were waiting to bunker at anchorage in Algoa Bay on Wednesday, and 12 more are scheduled to arrive this week, Rennies says.

Bunker supply is said to be normal in Algoa Bay and Durban, with some suppliers offering prompt deliveries of VLSFO and LSMGO.

Peninsula has dropped ‘Petroleum’ from its name to represent the company’s transition to a more sustainably focused brand, says company statement.