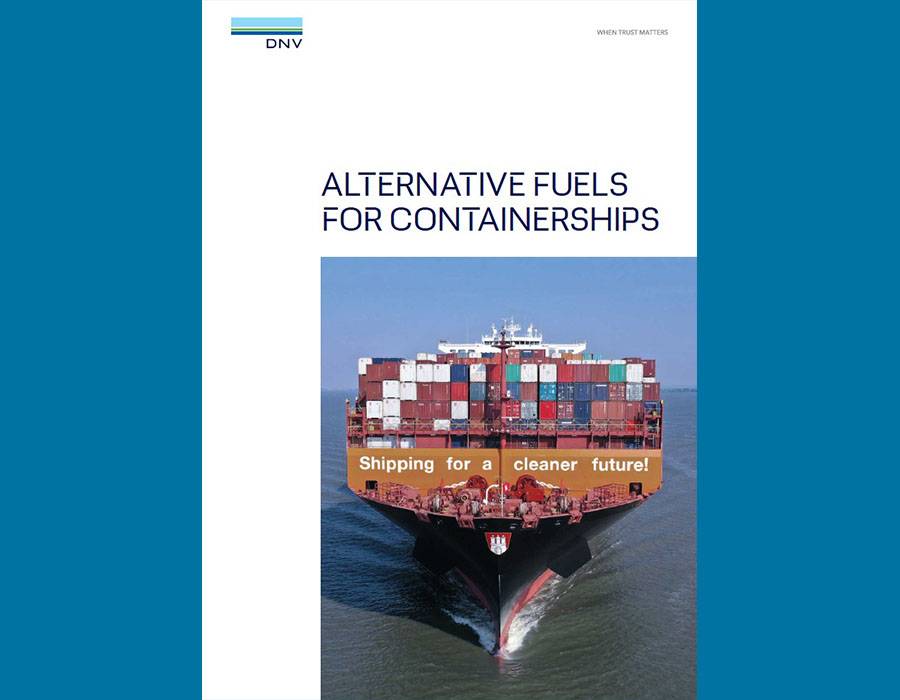 For shipowners ready to order new ships today, the tough question is what fuel to build for. Answering that question is actually not as difficult as some may think, says Jan-Olaf Probst, Business Director Container Ships at DNV.

While the ultimate carbon-free propulsion technology has yet to be determined, there are some fairly safe assumptions for decision makers to go by – for example that the future ship fuel landscape is going to be more diversified than in the past, i.e. that certain fuels will be predominant on specific routes and/or for specific ship types.

Furthermore, there is currently no alternative to combustion engines in sight for ocean-going vessels. The crucial question is which fuel technology is the safest investment decision for the lifetime of a vessel built in the mid-2020s.

To provide decision support to owners, DNV has published a guidance document called Alternative fuels for containerships. The paper should be viewed as a “living document”, says Probst – it will be amended over time as new findings become available. The first edition provides some general information as well as an in-depth discussion of LNG; chapters on other alternative fuels will follow soon, starting with methanol. “Since DNV has no vested interest in any particular fuel solution, our advice is entirely neutral, based on scientific facts, sound industry experience and feasibility calculations only,” stresses Probst. “Our main goal is to support the maritime industry in meeting the decarbonization targets.”

The reason DNV decided to begin its discussion of alternative fuels with LNG is simple, Probst says. “LNG is fully established as a ship fuel and embedded in a comprehensive regulatory framework, in particular the IGF Code; LNG technology and expertise is mature and has been around for a long time. Moreover, LNG is the most frequently transported gas worldwide; LNG is the first gaseous fuel to have received full regulatory approval; there is proven know-how for building, bunkering and operating LNG-powered ships; and the bunkering infrastructure has grown so fast that nearly all major seaports can now provide refuelling opportunities.” LNG bunkering vessels can be deployed practically anywhere, and bunkering does not necessarily have to occur in port.

Governments and energy companies around the world are driving the development of massive green hydrogen production capacity using renewable energy and hydrolysis. They plan to use biohydrogen and CO2 captured from industrial combustion processes to produce synthetic methane, the main component of natural gas. “Once sufficient quantities of ‘green’ methane are available, it can be blended with fossil LNG or fully replace LNG to achieve the required level of CO2 neutrality,” Probst points out. “No infrastructure or on-board modifications will be necessary. In other words, LNG is currently the most realistic and low-risk alternative fuel for newbuilds, especially for deep-sea shipping.”

The container-shipping segment has been showing the strongest interest in alternative fuels. A growing number of large container vessels are equipped with dual-fuel engines and either run on LNG or are LNG-ready. “The DNV alternative fuels document thoroughly discusses all aspects of building LNG-ready ships, including considerations such as different tank types and tank arrangement options and their pros and cons. It provides solid, well-founded, unbiased decision support,” says Probst.

Of course, there cannot be a one-size-fits-all solution to decarbonization; the topic has to be evaluated individually for each ship type and operating pattern, Probst cautions. A number of uncertainties regarding future fuel prices and availability remain for the time being; it is up to the individual owner to draw the final conclusions for the best way to proceed based on the facts available today. “Based on DNV’s analyses, it makes sense to build ships with propulsion systems that leave several future options open, so whatever conversion or retrofitting decision has to be made in ten or more years’ time, the financial consequences will be manageable,” says Probst.

Probst emphasizes that it is time for the industry to stop using HFO as a baseline fuel – whether in terms of fuel costs, the simplicity of on-board fuel handling systems or the distances that can be travelled without bunkering. These operating conditions are unsustainable, and the industry is well advised to look ahead and accept that the fuel future will be more complex – but it will be so for everybody.

“Building a ship for alternative fuels is definitely more costly than building a conventional vessel,” Probst contends. “However, considering the extra costs and space requirements of a scrubber and SCR system in an HFO-fuelled vessel, the extra costs for LNG propulsion appear much less significant. Once an LNG-powered vessel reaches the break-even point after five to eight years of operation, its operating cost is actually lower than that of a conventionally powered vessel. Provided that plans to introduce a CO2 taxation system go ahead, which appears likely, the cost difference will shrink even further and the break-even point will be reached faster as well.” 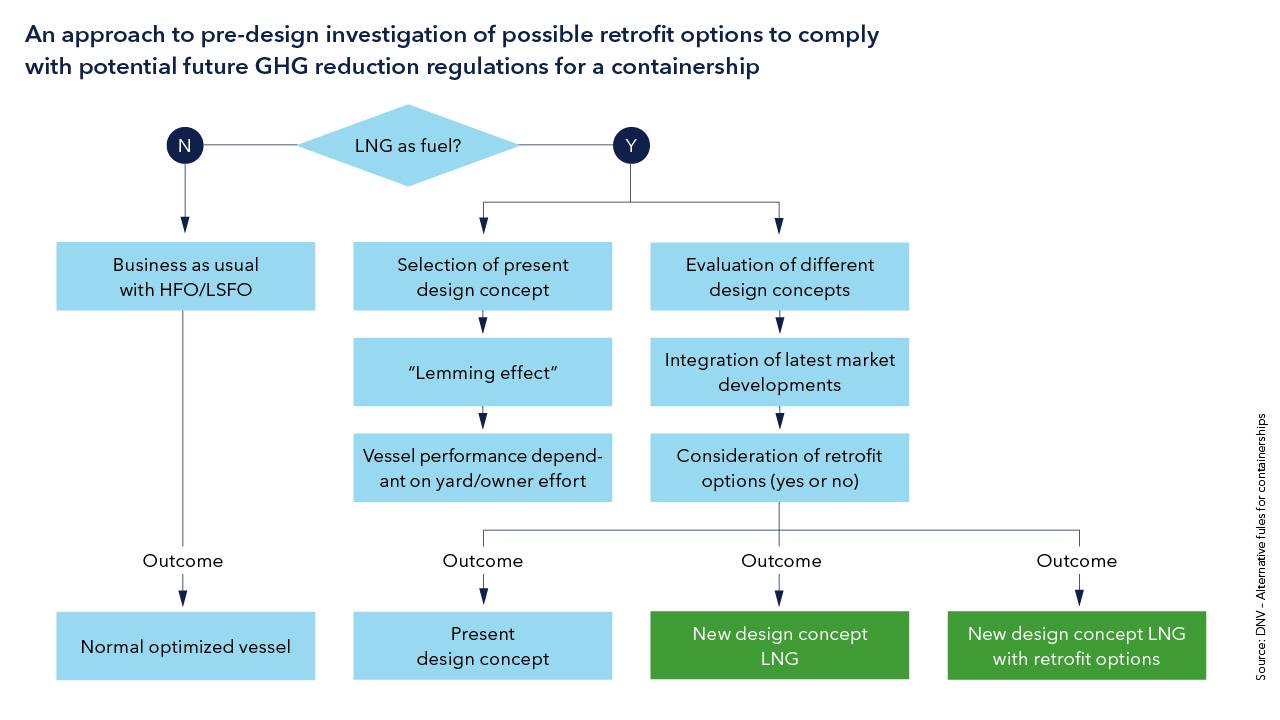 As a low-carbon technology that can eventually become carbon-neutral, LNG propulsion makes a newbuilding project much more attractive to financiers and charterers, the cargo market and, ultimately, the general public. What is more, combining a low-carbon project with an environmentally friendly financing scheme gives projects a compelling “green” character. Several newbuilding orders for larger container vessels running on LNG are already being financed as environmentally friendly projects via a “syndicated green loan” conforming to the Loan Market Association’s principles. “This kind of project is sure to set a new benchmark and will be the new normal,” says Probst. 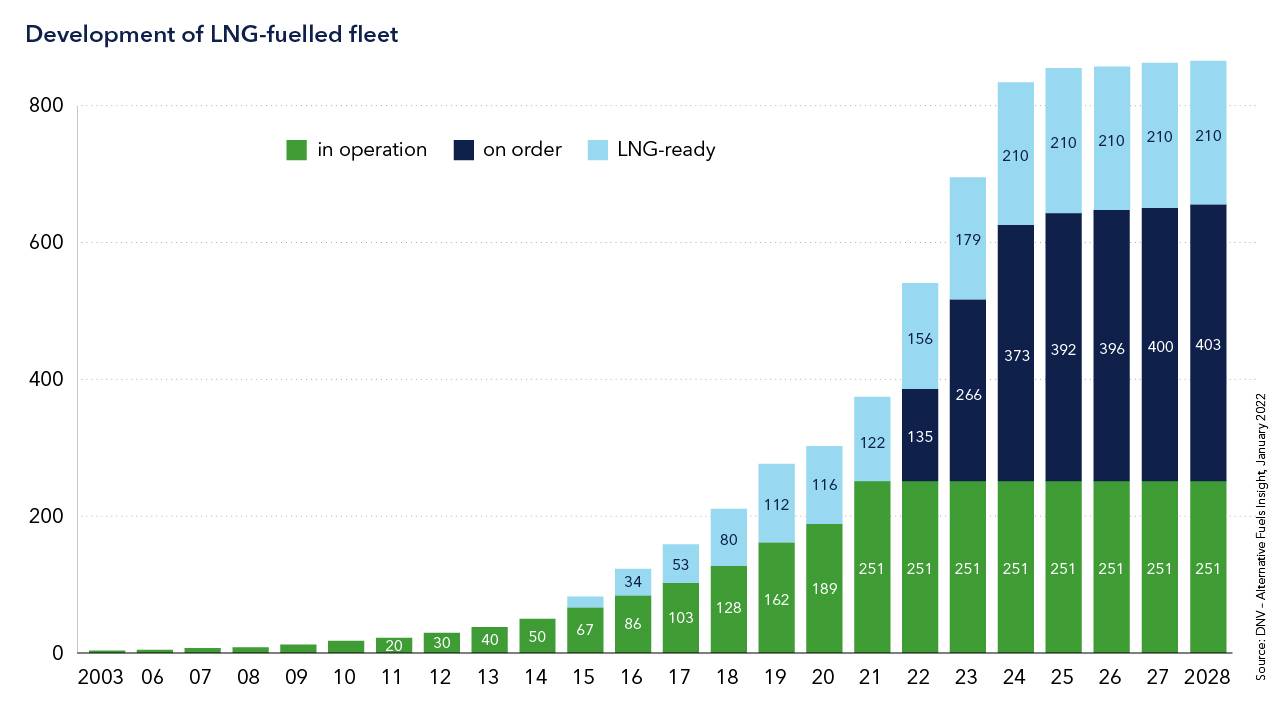 The Alternative Fuels document also provides valuable input for key decisions about the on-board energy concept. “Every machinery concept comes with specific, calculable emission levels,” explains DNV expert Jan-Olaf Probst. “For example, a high-pressure main engine has only negligible methane slip but cannot burn boil-off gas. Type C tanks can handle overpressure, while membrane tanks cannot, which can be an issue during a longer stay in port.” All these considerations are discussed thoroughly in the DNV document and presented in a way that helps decision makers arrive at the most appropriate solution for the ship they want to build.

Loss of container slots is negligible

“We frequently hear the argument that valuable container slots will be lost when LNG tanks must be installed,” Probst mentions. “But the actual number of slots sacrificed is minimal on a modern large container ship.” It is advisable to position the LNG tanks below the deckhouse in the case of a twin-island design, he points out, and to optimize the shape of the tank to account for the risk of sloshing. “Opting for Type B or C tanks instead eliminates this issue. However, there is no solution that has only positive aspects,” he says. “It is also important to fine-tune the engine, tank and fuel-handling arrangements to create an efficient and coherent overall system, and to discuss all these aspects in depth with the yard so considerations of economy on the shipbuilder’s side won’t compromise the operational fitness and profitability of the resulting ship.”

Designers of LNG container vessels should be aware of the regulatory restrictions surrounding bunkering. “It makes sense to arrange the bunkering equipment in a section of the ship where the bunkering process has the lowest possible impact on efficient loading and discharging,” says Probst. Furthermore, the crew of an LNG-powered vessel must undergo specific training, and the responsible persons for bunkering must obtain a special certificate. “All this can be taken care of prior to delivery, and a comprehensive risk assessment should be a standard part of the planning process for any newbuild,” he emphasizes.

LNG is available today and is easier to implement than what is commonly believed. It opens up a fuel perspective for the entire lifetime of a vessel built during this decade, including multiple options to eventually switch over to eco fuels to ensure compliance with emission regulations far into the future. DNV will continuously update its Alternative fuels for containerships paper and incorporate lessons learned. The document thus provides owners with solid, state-of-the-art knowledge as a basis for planning the next generation of containerships and other vessels.

Bunker trading firm has been recognised as among top 50 privately-held companies who have contributed to the economic development in Singapore and abroad.

Concentrated inspection campaigns will be carried out between September to November 2018.