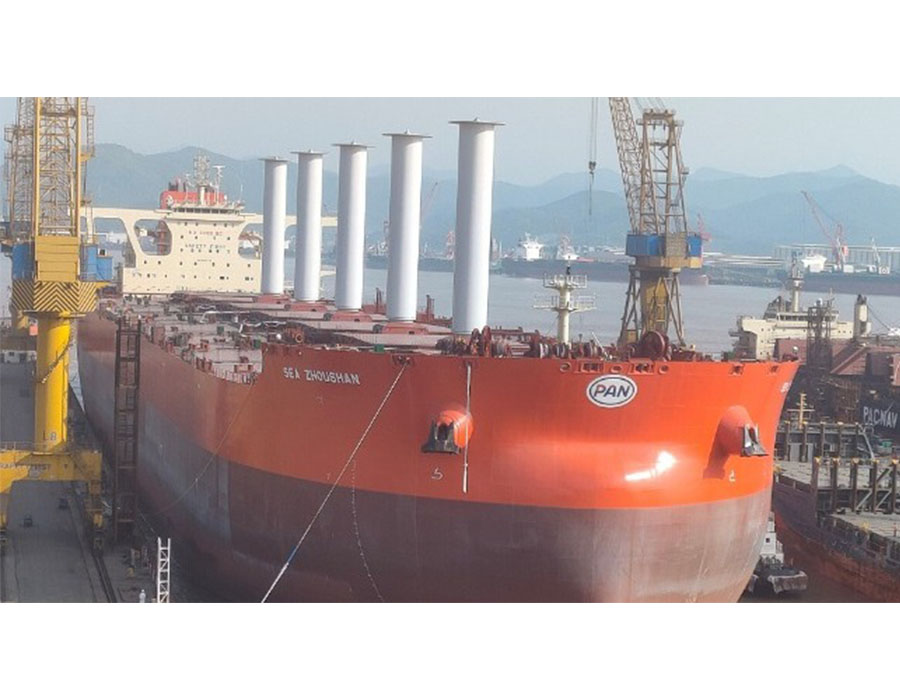 Mining company Vale on Tuesday (16 November) said it has received the Wind Propulsion Innovation Award presented by the International Windship Association in Glasgow, Scotland, at a COP 26 side event which took place earlier in November.

The organisation encouraging the global use of wind propulsion in commercial shipping, awarded Vale the prize in the category for companies that encourage adoption of the type of technology through prototypes or commercial use – since May, the company’s fleet of ships has a Guaibamax equipped with the rotor sails.

In total, 84 nominations were submitted to a panel made up of members of the industry, academia, supporters of wind propulsion technology and people related to energy and sustainability areas. Vale was the winner in one of the four categories opened to the public vote.

According to the organisers, pioneering projects, innovative technologies, people and companies that are making a difference in advancing wind propulsion as an efficient, low-carbon and sustainable option for the commercial shipping fleet were recognised.

“This active listening and engagement with society is very important, and not only recognizes our work of the last few years, but mainly sends us a strong message of how important the climate change agenda and the transition to a low-carbon world is and how we must be part of the solution,” says Vale’s marine engineering manager, Rodrigo Bermelho.

The rotating sails are cylindrical rotors, four meters in diameter and 24 meters high, equivalent to a seven-story building.

During operation, the five rotors rotate at different speeds, depending on the environmental and operational conditions of the ship, to create a difference in pressure in order to move the ship forward, based on a phenomenon known as the Magnus effect.

Still in the testing phase, rotor sails can offer an efficiency gain of up to 8% and a consequent reduction of up to 3,400 tons of CO2 equivalent per ship per year, said Vale.

If the pilot proves to be efficient, it is estimated that at least 40% of the fleet will be able to use the technology, which would impact on almost 1.5% annual emissions reduction by Vale’s iron ore shipping.

The project to use rotor sails is part of Ecoshipping, a program created by Vale’s shipping area to meet the company’s challenge to reduce its carbon emissions, in line with what is being discussed at the International Maritime Organization (IMO).

The targets are aligned with the Paris Agreement. In August this year, Vale received the first Guiabamax ship with air lubrication installed.

The technology creates an air bubble carpet on the ship’s underside, allowing the water to reduce friction with the hull. Conservative expectations are for a fuel reduction of around five to 8%, with a potential reduction of 4.4% in annual emissions from Vale’s iron ore shipping.

By adopting new technologies and renewing its fleet, Vale has heavily invested to incorporate state-of-the-art efficiency and environmental innovation in shipping. Since 2018, the company has been operating with second-generation Valemaxes and, since 2019, with Guaibamaxes, whose capacities are 400,000 tons and 325,000 tons, respectively.

The vessels are among the most efficient in the world and can reduce CO2 equivalent emissions by up to 41% compared to a capesize ship, of 180,000 tons, built in 2011.

Three-year term loan facility was made to finance the general working capital requirements of the group.

Among reasons supporting premiums are limited number of participants supplying HSFO bunkers in the port and solid demand for large cargoes, especially from container vessels.

With incredible teamwork and the will to succeed, Sing Fuels grew from a Singapore-based bunker trading company into a global energy trading company.