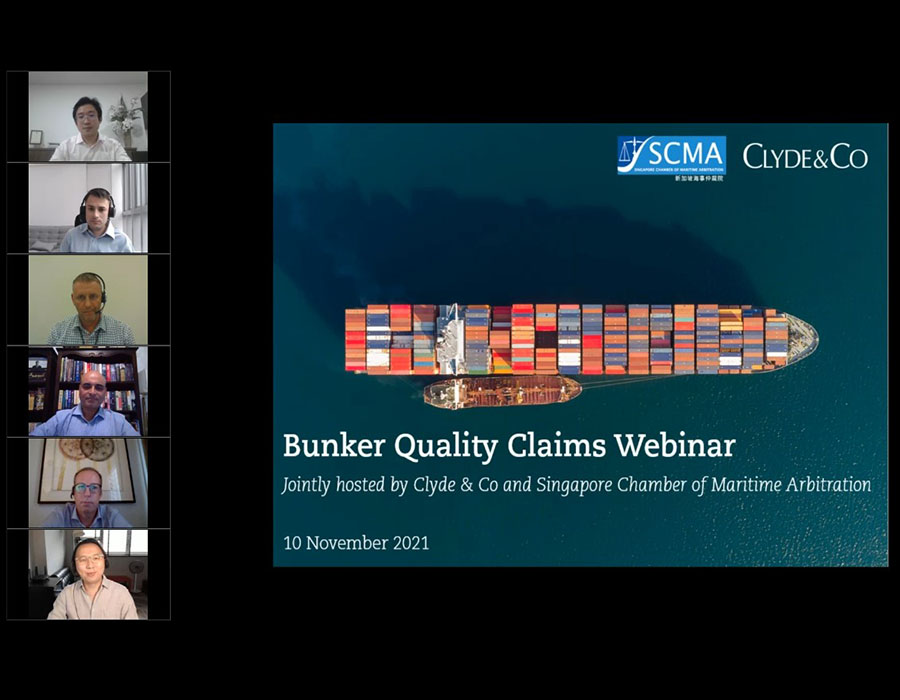 The Bunker Quality Claims Webinar organised by the Singapore office of international law firm Clyde & Co and the Singapore Chamber of Maritime Arbitration was moderated by Manifold Times.

“There actually is no magic to this. We recommend working with reliable parties to understand the supply chain and ensuring that there is transparency and accountability across it,”

“We advise buyers to find out from their suppliers how cargo sourcing and quality control and assurance procedures are carried out.”

Choong quoted an example, sharing that EMF has been working with bunker buyers who arrange for their own surveyors to come on board the company’s bunker tankers to draw samples from the cargo tanks and conduct quality testing before bunkering.

Further, due to the company owning, operating and managing a sizeable fleet of bunker tankers and cargo inventory, it is able to promptly arrange for another bunker stem should a particular cargo not meet a client’s requirements.

“To us, a lot of emphasis is placed on making sure the product is on-spec before reaching the receiving vessel’s fuel tanks. It is definitely more prudent to avoid the whole problem by conducting more checks [in the beginning], rather than to face the consequences such as delay, debunkering and other complications.”

Jens Maul Jorgensen, Director at Oldendorff Carriers, highlighted the importance of the bunker surveyor’s role in correctly determining the quality of marine fuel.

“When a surveyor is not doing their job correctly we have a huge problem,” states Jorgensen.

Amongst scenarios shared by Jorgensen’s presentation was a case study of a bunker surveyor witnessing the bunker barge crew not pouring the samples in the correct manner – but not acting on it immediately.

Each sample bottle was fully filled up individually in a series; instead of the proper method recommending the bunker sample to be evenly distributed by three layers among each bottle.

Though the surveyor did later submit a Letter of Protest, he did not put a stop to notify stakeholders of the wrongful bunker sample collecting process when witnessing it. Further, he did not take any pictures of the disputed operation.

“And that means we have to spend an additional several thousand dollars to take tank samples [in order to properly determine the quality of the bunkers] due to a lack of focus from the bunker surveyor.”

“I’m just hoping the surveyor companies are really stepping up now and really making sure everything would go fine.”

“So where am I going with all of these assertions? Well, actually, could the problem be the human actor in the bunker industry?” He questioned.

“Is it not necessarily the fuel quality to blame? But is it the lack of understanding and tender loving care by all people in the supply chain to maintain cool and level headed when issues occur?”

Raitt noted several clients within the past 12 months encountering sludging in the oil separators when consuming VLSFOs, even when the Total Sediment Potential (TSP) was on specification.

The clients erroneously reported fuel instability when encountering the formation of molten wax at 50°C due to the paraffinic nature of VLSFOs; but reported the problem to be solved when advised to handle the product at higher temperatures.

“So that’s just one example of where tender loving care and understanding the fuel that you’re dealing with needs to be done by the crew on board a ship.”

“This is why the surveyor work is incredibly important in the context of where there are claims,” he states, while echoing Jorgensen’s view of the surveyor’s importance during a bunkering operation.

“So generally, drip samples from the receiving vessels’ manifolds are regarded as the most accurate and samples that are taken from the bunker barges or alternatively from the vessel’s tanks may not be regarded as representative of the fuel that is supplied.”

This is especially the case when the bunker supplier is supported by an accurately taken drip sample.

“However, it is genuinely quite difficult for a buyer to establish that there has been fraud or manifest error,” he shares.

“The buyer is likely to need clear evidence that the supplier sample is not representative of the fuel supplied to the vessel.”

Punit Oza, Executive Director at the Singapore Chamber of Maritime Arbitration (SCMA), noted arbitration as a “fantastic way” of dealing with a non-responsive entity.

“Most of the time, arbitration is used as a way of getting the non-responsive party to come to the table. And that’s an effective way of doing it,” says Oza.

“The advantage of the SCMA is that there’s no filing fee, and there’s no admin fees. So, you when you file an arbitration with SCMA, you do not have to pay any costs upfront.”

A plaintiff who files an arbitration with SCMA, also possible through an easy QR Code or E-Form, will get a reply within 24 hours with an unique registration number of the suit; further, SCMA will also notify to the counterparty confirming that the arbitration is registered.

“That puts additional pressure on the non-responsive Counterparty and hopefully brings the guy to the table. There are also rules in SCMA which allow for the arbitration to proceed even if the other party doesn’t respond,” he explains.

“The award can be given in absence [of the counterparty] as well. As long as you’ve given the notices you should be able to uphold that award and enforce it through the New York Convention which is enforceable in over 164 countries all over the globe.

“Furthermore, there some exclusive procedures such as Singapore Bunker Claims Terms, Small Claims Expedited Procedure & Arb-Med-Arb Hybrid solution, which are all extremely useful tools for the parties to cost-effectively resolve their disputes.”

By joining the Center, the Group aligns itself with a network of like-minded companies to find solutions for a sustainable future, says Royal Caribbean Group President and CEO.