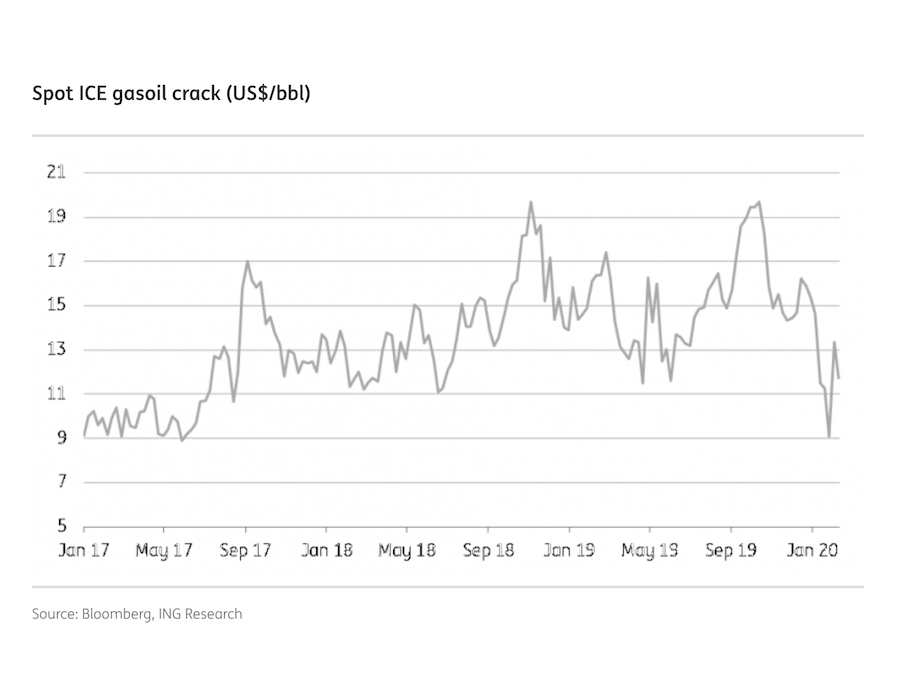 Think-ING on Wednesday (19 February) published an article outlining the factors and implications behind the unexpected fuel spreads that occured since January 2020; it has been written by Head of Commodities, Warren Patterson.

There were great expectations for product markets in 2020 with IMO sulphur regulations coming into force at the start of the year. Expectations that this regulation would be bullish for middle distillates and bearish for high sulphur fuel oil has not gone to plan. Here’s why:

One of the biggest surprises since the implementation of new International Maritime Organization (IMO) sulphur regulations is the weakness we have seen in the middle distillate market. Expectations were that we would see a large share of the shipping industry shift to marine gasoil, which would be a bullish scenario for middle distillate cracks. Instead,  gasoil cracks are trading at levels last seen in 2017, falling by more than 50% from their October 2019 highs. A milder than usual winter, and the outbreak of the COVID-19 virus are just two factors adding further pressure on middle distillates.

However, from a shipping perspective, one of the key reasons why we have not seen strength in the market is the fact that demand for very low sulphur fuel oil (VLSFO) has been stronger than expected. As a result, the pick-up in marine gasoil demand has not been as much as anticipated. This has happened despite several reports of off-spec VLSFO. There also appears to be an element of hesitancy to more towards marine gasoil, with concerns over viscosity. This is evident in Asia, where we have seen VLSFO actually trading at a premium to marine gasoil.

While we have seen weakness in the middle of the barrel products, fuel oil has strengthened, defying market expectations. The prompt crack in NW Europe has traded from around a US$30/bbl discount late last year to less than a US$15/bbl discount currently. There are several reasons behind this strength.

Firstly, refiners would have made any adjustments they could, be it through refinery upgrades, or adjusting feedstock accordingly to minimise HSFO yields as we moved into 2020.

Secondly, there has been increased interest from US refiners to process HSFO and, looking at fuel oil imports into the US over the last few months, particularly towards the end of 2019, volumes did increase. This move does also appear to reflect the limited availability of heavier crude grades for refiners in the US Gulf, given US sanctions against Venezuela.

Thirdly, and this certainly shouldn’t come as too much of a surprise, we see more ships with scrubbers installed coming online. This would provide some additional support to the demand picture for HSFO. The coronavirus could even have an impact here, with a potential delay in scrubber installations.

Finally, a factor which was more of a risk than a reality was the potential for the US not to extend waivers which allow Iraq to import natural gas and electricity from Iran. If this were to happen, it would likely mean that Iraqi domestic fuel oil consumption would increase for power generation needs, so reducing export availability of fuel oil from the country. The risk of this happening has eased, however,  with the US recently extending waivers by another 45 days.

The VLSFO market was performing well until news that China would provide tax waivers to refiners in the country for lower sulphur fuel oil production, which has set the path for VLSFO output in China to grow. Already there are reports that PetroChina has delivered volumes of VLSFO into bonded storage, where it will likely be retailed to ships. The idea is that China wants to build its capabilities as a bunkering hub, rather than wholesale exports of VLSFO.

What has this all meant for spreads?

The above dynamics have had an impact on marine fuel spreads. The more bearish environment we have seen in the middle distillate market, along with a more constructive HSFO market, has meant that the spot NW Europe gasoil-HSFO spread has narrowed from around US$400/t at certain stages last year to around US$235/t currently. Meanwhile, pressure from potential Chinese VLSFO supply has had a similar impact on the spot VLSFO-HSFO spread, with it falling from a high of US$290/t late last year to around US$165/t currently. Obviously, these narrower spreads increase the payback period for a scrubber, making the economics of an installation not as attractive as it looked last year.

As we see more scrubber fitted ships coming online, it will increasingly eat into the advantage of burning HSFO. Therefore, we believe the spreads are unlikely to trade back out to the highs seen last year.