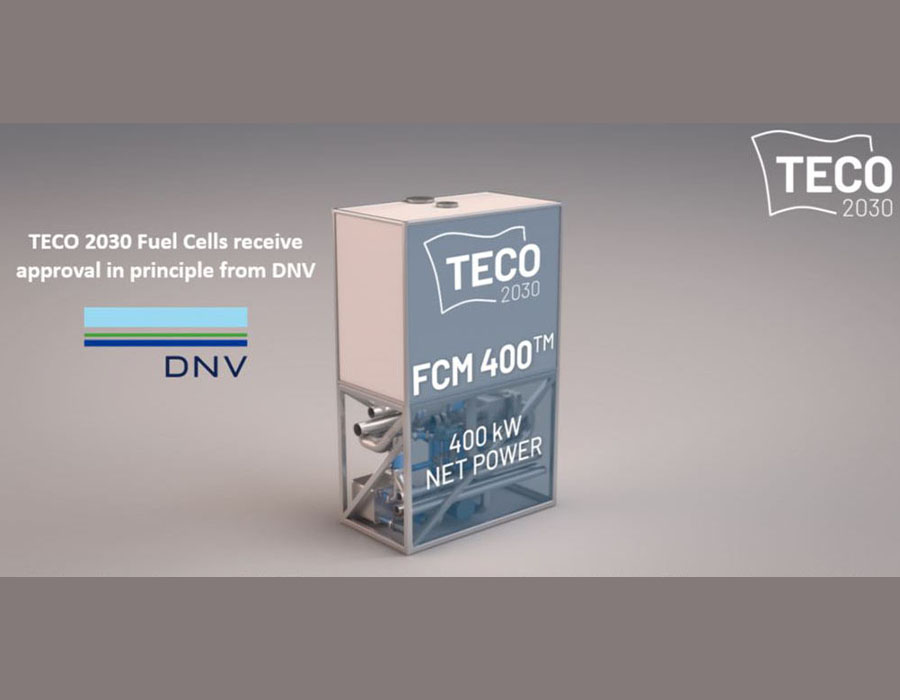 Maritime cleantech company TECO 2030 on Monday (4 October) said it has been awarded an Approval in Principle (AiP) by DNV for its Hydrogen Fuel Cell System and three versions of Fuel Cell Module FCM400.

“The Approval in Principle by DNV marks another important milestone for us in our development of zero-emission solutions for the maritime industry. By giving us the AiP, DNV clearly states that our hydrogen fuel cell system and fuel cell modules are safe to use,” says Tore Enger, CEO of TECO 2030 ASA.

An Approval in Principle is an independent assessment, confirming that the design is feasible and that there are no obstacles that could prevent the solution from being realised.

“We are very pleased to be working with TECO 2030 on this important project,” says Olaf Drews, Head of Machinery and Piping Systems at DNV Maritime.

“For novel technologies, like fuel cells, having class involvement can be vital in building market confidence. We are continually working to provide practical solutions to enable their uptake and were the first classification society to publish rules for fuel cells in 2008.”

“This certificate confirms the basic suitability of TECO’s fuel cell systems for marine applications,” he adds.

The engine of tomorrow

Hydrogen fuel cells are the engines of tomorrow and convert hydrogen into electricity while emitting nothing but water vapour and warm air.

By exchanging one or more of their engines with a TECO 2030 Marine Fuel Cell, ships can switch from fossil fuels to hydrogen and reduce their emissions to zero. They can then sail emissions-free either on the whole journey or on shorter distances, such as when sailing into and out of ports.

Hydrogen fuel cells can also be used during port-stay, loading and discharging, enabling zero-emission operation at berth, without having to connect the ship to an onshore power supply.

The TECO 2030 Marine Fuel Cell is the first fuel cell system in the world that is specifically designed for use onboard ships and on other heavy-duty applications.

The fuel cell module is designed with a capacity of 400 kW net power output. Several modules can easily be put together in containers, enabling system configuration in the multi-megawatt scale. A 40 feet ISO fuel cell container from TECO 2030 will have a power production capacity of 6.4 MW.

The TECO 2030 Marine Fuel Module FCM400 encloses a low temperature PEM (Proton Exchange Membrane) fuel cell system. The system is developed by TECO 2030 in cooperation with the Austrian powertrain technology company AVL, while the modules have been developed internally at TECO 2030.

TECO 2030 has now started the process of receiving Type Approval (TA) from DNV. Type Approval is a procedure by which the classification society confirms that a certain product complies with the rules for standard designs and/or for routinely manufactured, identical equipment.

Panama bunker fuel sales marginally down 1.8% on year in 2018