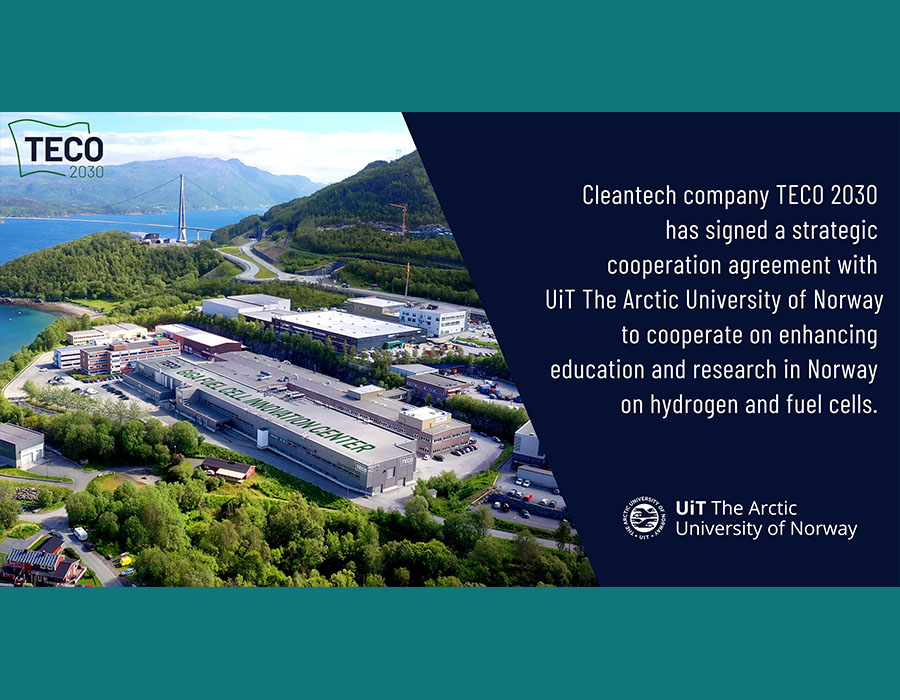 Marine cleantech company TECO 2030 on Thursday (21 October) said it has signed a strategic cooperation agreement with UiT, The Arctic University of Norway to cooperate on enhancing hydrogen and fuel cell research and education in Norway.

The agreement was signed between TECO 2030 and UiT’s Faculty of Engineering Science and Technology.

The faculty offers courses in hydrogen and fuel cells, and is based in Narvik in northern Norway, in the same city where TECO 2030 is currently working to set up Norway’s first large-scale production of hydrogen fuel cells.

The TECO 2030 Innovation Center in Narvik will be a combined factory and innovation centre. TECO 2030 will produce hydrogen fuel cells that are specifically designed for use on ships and other heavy-duty applications.

Will contribute to increased value creation in northern Norway

“Contributing to the development of sustainable energy solutions for land and sea transport is central in the research and development work we do at our faculty, and for us, fuel cell solutions that use hydrogen as an energy carrier are of particular interest,” says Professor Bjørn-Reidar Sørensen, Head of the Department of Building, Energy and Material Technology at the UiT.

“We are looking forward to cooperating with TECO 2030. Our goal is that we, through our cooperation with TECO 2030, can also contribute to increase the value creation in the north,” says Sørensen.

“We have extensive experience in working closely together with business and industry, and we are today providing students with an education that can be used directly in TECO 2030’s work. We will also be able to adapt our study offer according to the specific needs of TECO 2030,” he adds.

As part of the agreement, TECO 2030 will contribute to improving UiT’s research and education in the field of hydrogen fuel cells. TECO 2030 will give UiT researchers and students the opportunity to use the fuel cell element testing facilities at the TECO 2030 Innovation Center during periods when they are not used in the production of fuel cells.

TECO 2030 and UiT will together also identify and cooperate on creating hydrogen-related projects for marine and land-based applications. Both parties will jointly conduct research projects and will cooperate on increasing the efficiency of the fuel cell production equipment at the TECO 2030 Innovation Center.

“We are very happy to be cooperating with UiT on enhancing the education in northern Norway for the use of hydrogen and fuel cells, and we are looking forward to welcoming students and researchers at the university to our new Innovation Center in Narvik,” says Tore Enger, CEO of TECO 2030 ASA.

“Our cooperation with UiT will contribute to increasing Norwegian competence on fuel cell development and will at the same time improve our access to highly qualified, potential future employees who already live in the region,” Enger adds.

The production of hydrogen fuel cells for use within the maritime industry is still in early stages, and it is currently limited competence in Norway on the development of fuel cells.

Will produce the engine of tomorrow

TECO 2030 is developing fuel cells together with the Austrian powertrain technology company AVL, and it took over the building that will become home to the TECO 2030 Innovation Center in summer. TECO 2030 is now in the process of making detailed plans for the factory and its production lines.

Hydrogen fuel cells are the engines of tomorrow and convert hydrogen into electricity while emitting nothing but water vapour and warm air. By installing fuel cells, ships and other heavy-duty applications can switch from fossil fuels to hydrogen and reduce its emissions to zero.

Fuel cells can enable ships to sail emissions-free either on the whole journey or on shorter distances, such as when sailing into and out of ports. It can also be used during port-stay, loading and discharging, enabling zero-emission operation at berth, without having to connect the ship to an onshore power supply.

SIL undertook a corporate guarantee to fulfil requirements by MBSB Bank Berhad to secure facilities for TMD to run its ordinary course of business.

The 32 kbpd refinery comprises a state-of-the-art distillation unit with a prefractionation column and is designed to be energy-efficient.