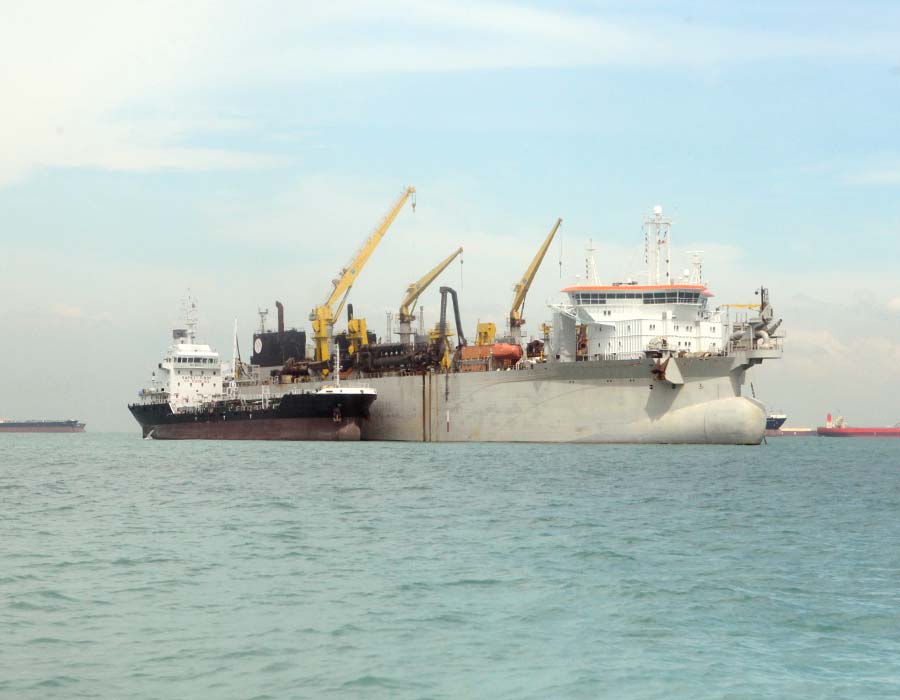 The sharp fall in prices of crude oil from Friday till Monday – which resulted in a significant drop in bunker prices at Singapore port – might not be leaving an indelible mark on most physical players operating within the republic’s physical bunker sphere, learned Manifold Times.

The Singapore bunker publication checked with players along each node of the marine fuels supply chain of how the earlier fall in oil prices affected their respective sector.

Bunker suppliers, thought by others to be most exposed to the historical fall in crude oil prices, offered a mixed response with most saying the risk has been somewhat mitigated.

One Bunker Manager noted the fall in bunker prices may not be producing much of an adverse effect for some shipowners.

“There is not much of a difference because we are mainly on term contracts. The drop has given us the opportunity to go out to look for more term contracts at better prices, and possibly over a longer-term period. So, for us it is just a normal thing as we do not see this as a huge drive to buy more or less bunkers,” he said.

Shipowners who purchase fuel from the spot market will most likely benefit from the fall in bunker prices, but under what circumstances, he notes.

“The question is if you buy now, how much more will you be able to buy as there will be other factors and constraints which may limit the amount of physical hedge available for each vessel. The other constraint may include the availability, port stay time, tank size, draft, cargo volume, credit, etc,” he added.

An international Bunker Trader believed the price drop to be a positive development for the marine fuels trading sector.

“It is a positive thing as the credit lines can now be utilised to purchase more bunkers as less cash is required for transactions,” he explained.

“The bunker suppliers who have neither hedged their inventory nor done risk management will be in trouble. But if the position was balanced then it should be no problem.”

A back-to-back trader focusing on marine fuel purchases for a foreign market says unprepared players in the physical bunker market could be taking a “very hard fall” during this period.

“It might be a problem for unprepared players with storage because some don’t really hedge all the cargo and if they can’t sell in time they will be holding onto high cargo prices.

“Prices are down almost USD 150 pmt on the prompt and futures markets, so assuming you have paid up USD 460 last month and now you can only sell USD 300 you are going to bleed. Players who bought cargo last week before the plunge in prices will be kicking themselves.”

“A lot depends on their position last week, but in general I feel we might see another batch of companies falling,” said the source.

“Flat price punters, suppliers long on trades or overcommitted on expensive purchases, or operating barges with high cost will suffer.

“Before the sharp decline, we noticed certain bunkering firms have been extremely uncompetitive possibility due to them waiting out the ‘low’ flat price as their bunker fleet sits idle.

“The premiums actually edged up slightly during the last couple of trading sessions but the upside has been limited due to VLSFO and LSMGO sentiments remaining extremely bearish.”

Interestingly, physical players at the republic offered a mixed view of how their sector will be affected by the price drop.

“Most bunker suppliers will be affected by the development; we have fixed cost such as wages and assets including vessels to cover under P&L,” said a management level executive of a local bunker supplier.

“The price drop will cause us to turnaround more as we will need more volume to cover the cost. However, at this time due to the coronavirus demand has also slowed down so this will be a challenge.

“Moving forward, we will try to engage more customers and form more alliances with other physical suppliers to work together in order to maintain cost and volume to provide better packages for customers so everybody can move forward together.”

A Singapore bunker supplier whose business predominantly focuses on providing barging services for oil majors says his operations were least affected by the historical fall in oil prices.

“Fortunately, we were not affected at all because in our business model we operate barges and conduct bunker deliveries on behalf of oil majors so we do not have exposure to oil price fluctuations,” said the owner.

“There is no impact [on our company] and therefore we are doing nothing particularly about it.”

Another bunker supplier which operates physical storage was keen to dispel market sentiments that all such physical players will encounter huge losses due to the fall in crude oil prices.

“In the past, whenever there are big swings in prices we did find one or two players collapsing due to being caught holding the wrong position. However, these days the bunkering sector is more conservative when it comes to these type of situations,” explained the Director.

“Most people think we will be conducting long term trades in this kind of market but that is not true due to availability of product, in fact nowadays there is less speculation and many firms face much lesser risk of being adversely affected by big swings in prices.

“Besides, the cheaper oil prices bring about less financing cost for the same amount of credit. We still collect the same amount of money in every month from what we charter out and combined with most of trades being conducted back-to-back, we do not expect margins to be significantly different.”

A management executive at another bunker supply firm, meanwhile, highlights physical players which locked in cargoes in the previous two weeks may experience losses for the short term.

“However, these physical bunker players in totality already made loads of money during November and December 2019; overall, the margins may not be as great as before but if this continues they will start to lose money,” he said.

“But then again, cargo prices have also caught up substantially. Hence, losses might be not as great as suggested by others.”

In light of the two recent cases, MPA and other relevant ministries said they will tighten testing and safety regimes for all shore-based personnel going onboard ships.