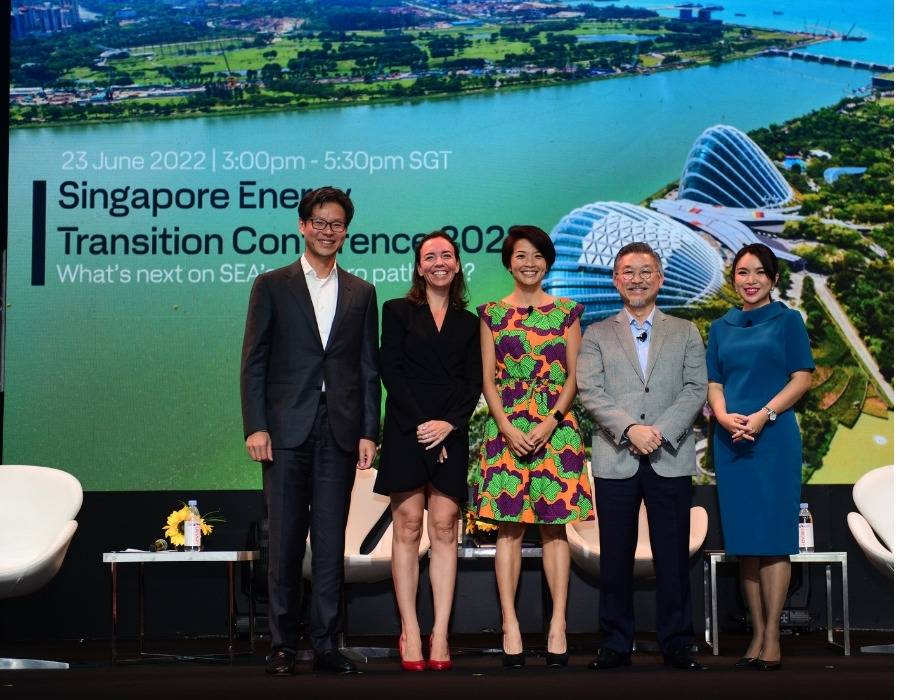 Editor’s Note: The full recording of the Singapore Energy Transition Conference can be found here.

Singapore will be an important “flywheel of change and innovation” to accelerate the energy transition, moving faster than others to reach net zero far ahead of 2050 by maturing key technologies and fuels to spur decarbonization.

At the Singapore Energy Transition Conference, which took place on 23 June 2022, DNV Group President and CEO Remi Eriksen drew attention to the key findings in its Pathway to Net Zero Emissions report. This sees CO2 emissions in the South-East Asian region reduce from 1.7 Gt in 2019 to 0.34 Gt in 2050, driven by the rapid penetration of renewables and reductions in fossil fuel use.[1]

He put Singapore in the same category as other highly industrialized regions – Europe, North America, Japan and Korea – which “need to get to carbon negative as fast as possible.”

Mr Eriksen also sees where Singapore can help less developed countries in the region through “piloting and scaling fuels and technology, as well as a leading hub for green finance.” 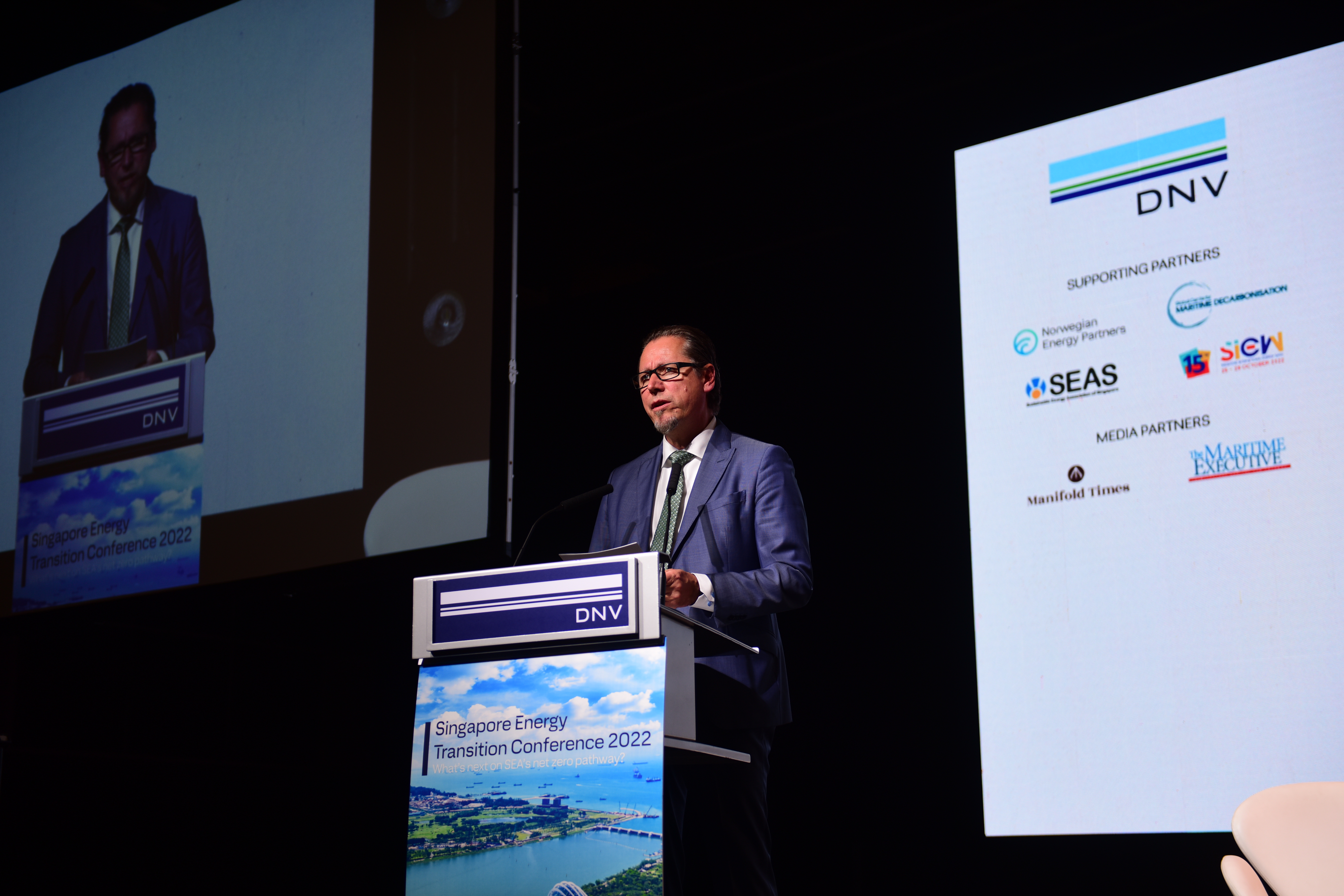 In response to questions from conference moderator Yvonne Chan, he pointed out that DNV modelling shows energy demand in South-East Asia will level off around 2050, but “we forecast a peak in CO2 emissions already by 2030, thanks to better energy efficiency.”

While he admitted that it was not feasible “to completely chase fossil fuels out of the global energy mix in the next 28-30 years,” the DNV Pathway report sees “a huge build out of carbon capture and storage (CCS), direct air capture, and nature-based solutions, to deal with those remaining emissions.”

“Once fossil fuels are fully eliminated from the world’s energy system, we at DNV see the ideal energy mix being 70% direct electrification with renewables and nuclear, 20% indirect electrification via hydrogen and hydrogen-derived products, and 10% biofuels,” Mr Eriksen told the 200 conference delegates present at Suntec Convention Centre, with many hundreds more following the event broadcast online.

He sees that hydrogen “is critical for decarbonizing the so-called hard to abate sectors”, like high heat industrial processes, long-distance trucking, shipping, and aviation, referencing DNV’s Hydrogen forecast to 2050.[2]

He added that the intercontinental trade of hydrogen will be almost exclusively in the form of ammonia, the hydrogen carrier, which “is much safer and more convenient to transport” and some 60% of energy-related ammonia will be traded between regions by 2050.

“Hydrogen, which is the lightest of substances, needs a heavy lift from all of us in this room if we are to have any hope of reaching the Paris targets,” Mr Eriksen emphasized. “In fact, dramatic and urgent changes are needed in all energy value chains, with much smarter end-use enabled by digitalization.” 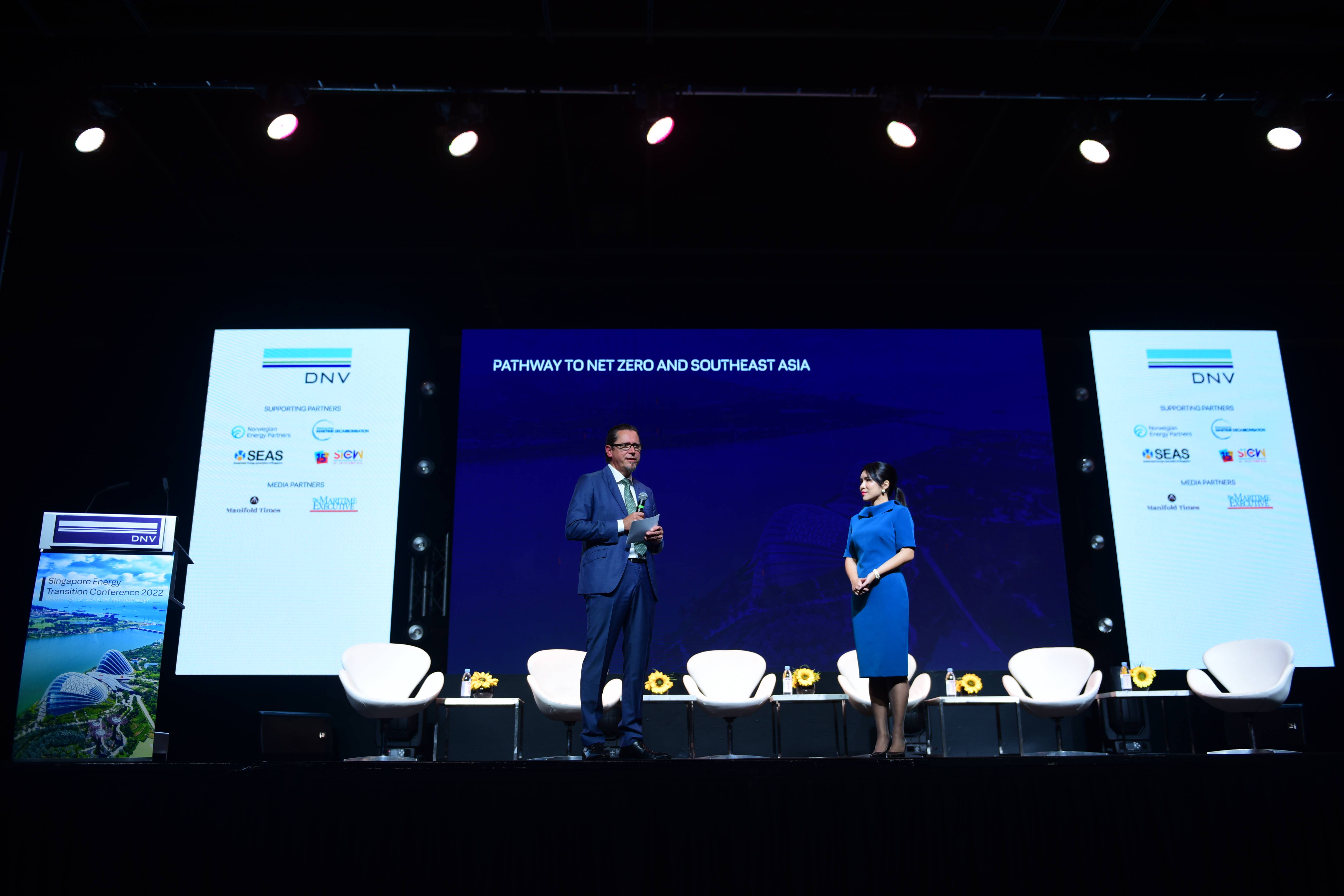 Other speakers and panellists at the Energy Transition conference reinforced the importance of hydrogen.

Jonathan Goh, External Relations Director from the Energy Market Authority (EMA), reported that Singapore also sees hydrogen playing an important role in power generation, as a fuel for industry and transport, including shipping and aviation.

He referenced the recent Energy 2050 report, which reinforced that Singapore needs to diversify its energy supply and push ahead to develop renewable energy (electricity) imports, hydrogen, solar, and Energy Storage Systems (ESS), while keeping its options open to leveraging new low-carbon alternatives and international carbon markets. 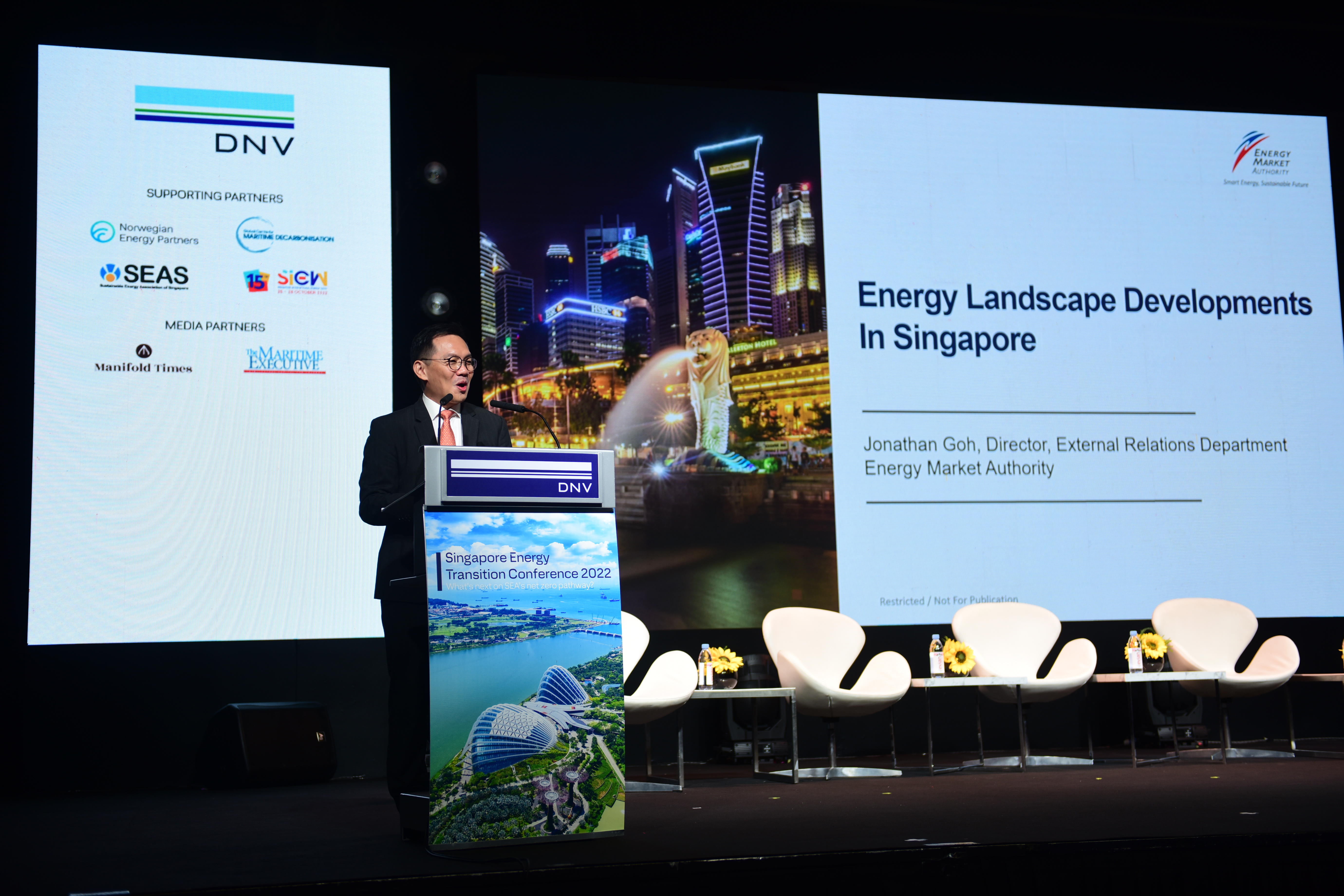 Brice Le Gallo, Regional Director for Energy Systems, APAC for DNV, led the way in the first panel on “SEA’s Pathway to Net Zero” by stressing that electrification will grow to play the most prominent role, with a much higher penetration of renewables in the regional energy mix, stating that “we need to start now!”

When asked to elaborate on whether Russia’s invasion of Ukraine might impact the energy transition, he referenced the DNV report (published on 6 April 2022) “The Ukraine war will not derail Europe’s energy transition.” This pointed to a small acceleration of decarbonization and emission reduction – from increased energy efficiency and lower economic growth – along with a faster renewables buildout.[3] 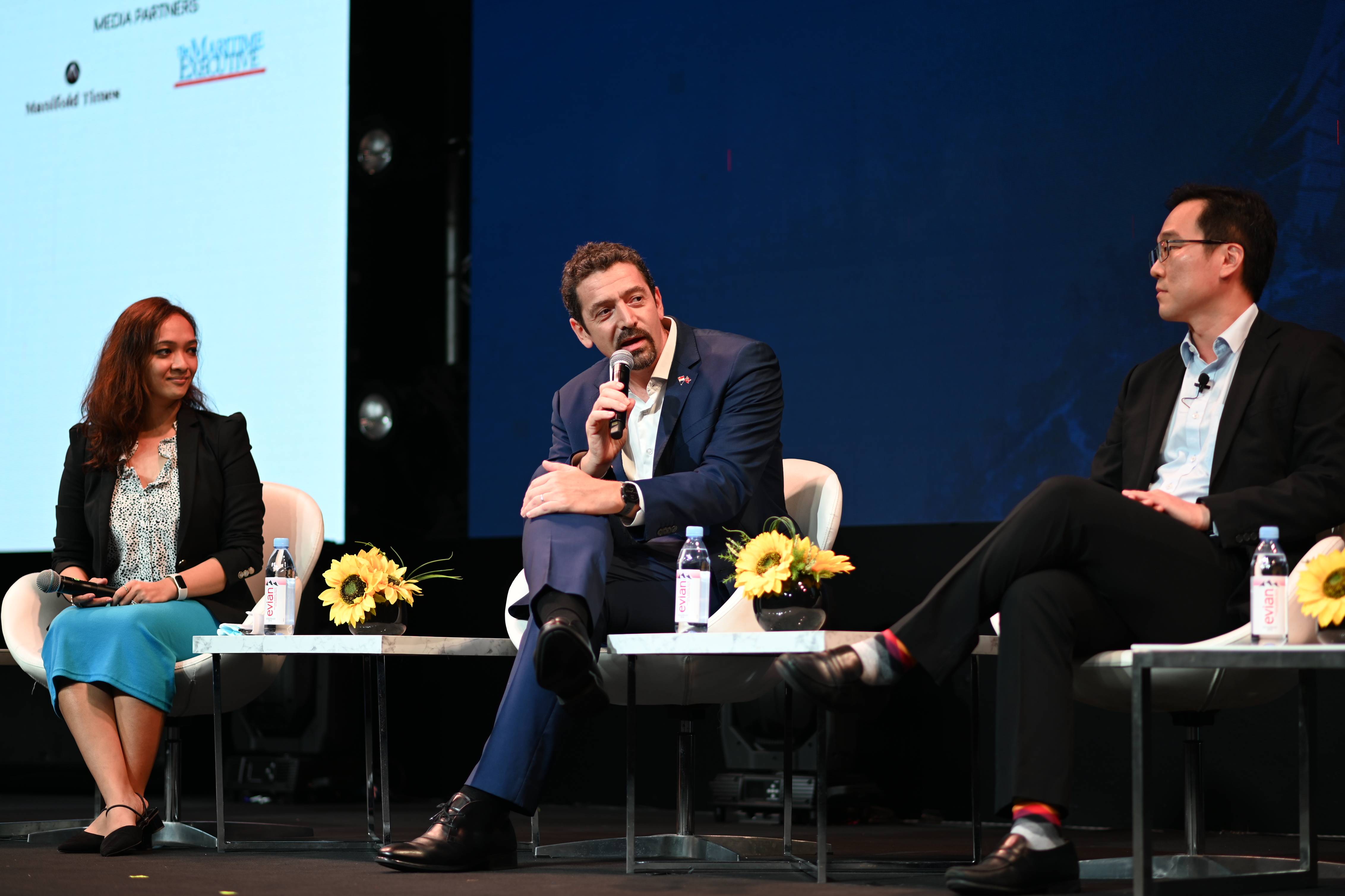 ACEN CEO Eric Francia said his company – a member of Philippines’ Ayala Corporation – has already committed to the early retirement of its remaining coal plants and has vowed to transition its generation portfolio to 100% renewable energy by 2025.

He told the conference that there needs to be more investment in battery storage in the region to make the most of renewable energy supply coming onstream and he also drew attention to the importance of nature-based solutions, as a means to help reduce greenhouse gas emissions.

Besides welcoming the move to hydrogen and Carbon Capture Utilisation and Storage (CCUS), Ms Fauziah Marzuki, Head of APAC Gas Power & Carbon at BNEF, advocated looking seriously at Direct Air Capture, a climate technology that effectively sucks CO2 out of the air and puts it to good use.

Another panellist, Tan Wooi Leong, Senior Director for Energy and Industrial at Surbana Jurong, said it was important to “entrench sustainability” while decarbonizing all sectors of the business. It’s also inherent to adopt hybrid energy systems, incorporating solar, wind, hydro and any other renewable source, to meet the optimization challenge.

Dannif Danusaputro, CEO PT Pertamina Power Indonesia, pointed out that while his country has sizeable renewable energy sources, like geothermal and hydro, which have yet to be fully tapped, key priorities are to decarbonize the energy grid, introduce hydrogen into the mix, and utilize CCUS technology as much as possible.

He said it would focus on renewable energy, hydrogen, and green mobility solutions, stressing that it was important to capitalize on available technologies and talent to achieve greater scale and pace of change. 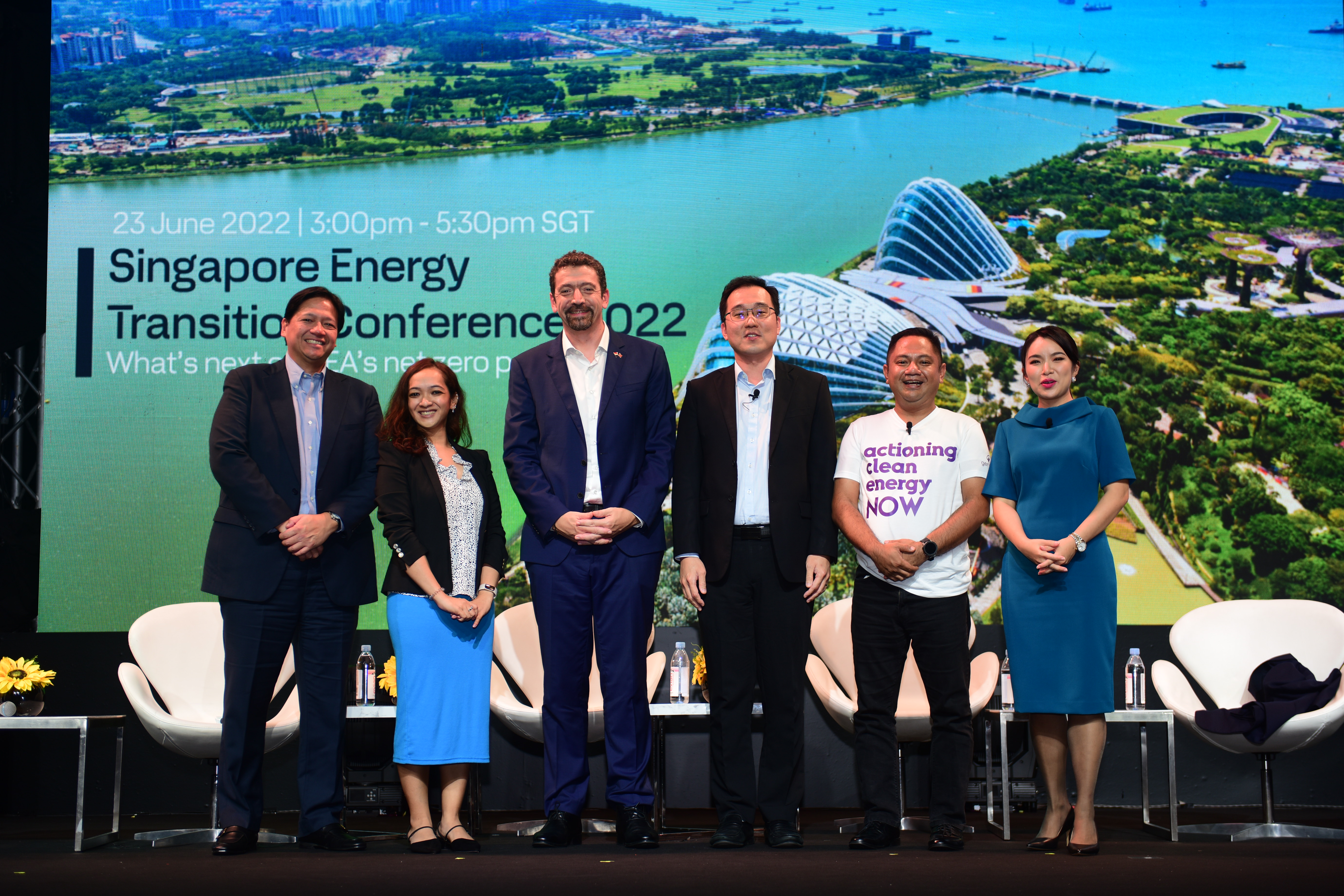 In the second panel of the day, which focussed on Maritime decarbonization, Datuk Yee Yang Chien, President and CEO of the MISC Group, confirmed that his company was committed – as a founding member of the Castor Initiative – to the development and construction of two very large crude carriers (VLCC). Designed for the use of green ammonia as a propulsion fuel, the first of these dual-fuel tankers would enter into service in late 2025 and the second in early 2026. He also reinforced that much more needs to be invested for decarbonization and the energy transition to net zero to be achieved in a timely fashion.

Professor Lynn Loo, CEO of the Global Centre for Maritime Decarbonisation (GCMD), provided an update on the progress of the ammonia safety study in Singapore – being led by a DNV consortium, with Surbana Jurong and Singapore Maritime Academy – which she says is “on track” and results will be “shared with the world” in the first quarter of 2023.

She also told the audience that besides the testing and adoption of zero carbon fuels, including biofuels, the maritime industry needs to control methane leakage and work on greater energy efficiency for ships at sea and in port.

Cristina de Santa Maria, Regional Manager South East Asia, Pacific and India, Maritime for DNV, also reinforced the importance of energy efficiency for the industry, as a means to reduce the carbon intensity of existing fleets of ships. She pointed to four measures which can be taken up now:

She also stressed how important it is to collaborate across all disciplines and sectors:

“We shouldn’t see decarbonization as a race or competition, but rather a team sport. We win or lose together. Collaboration is the true future fuel.” 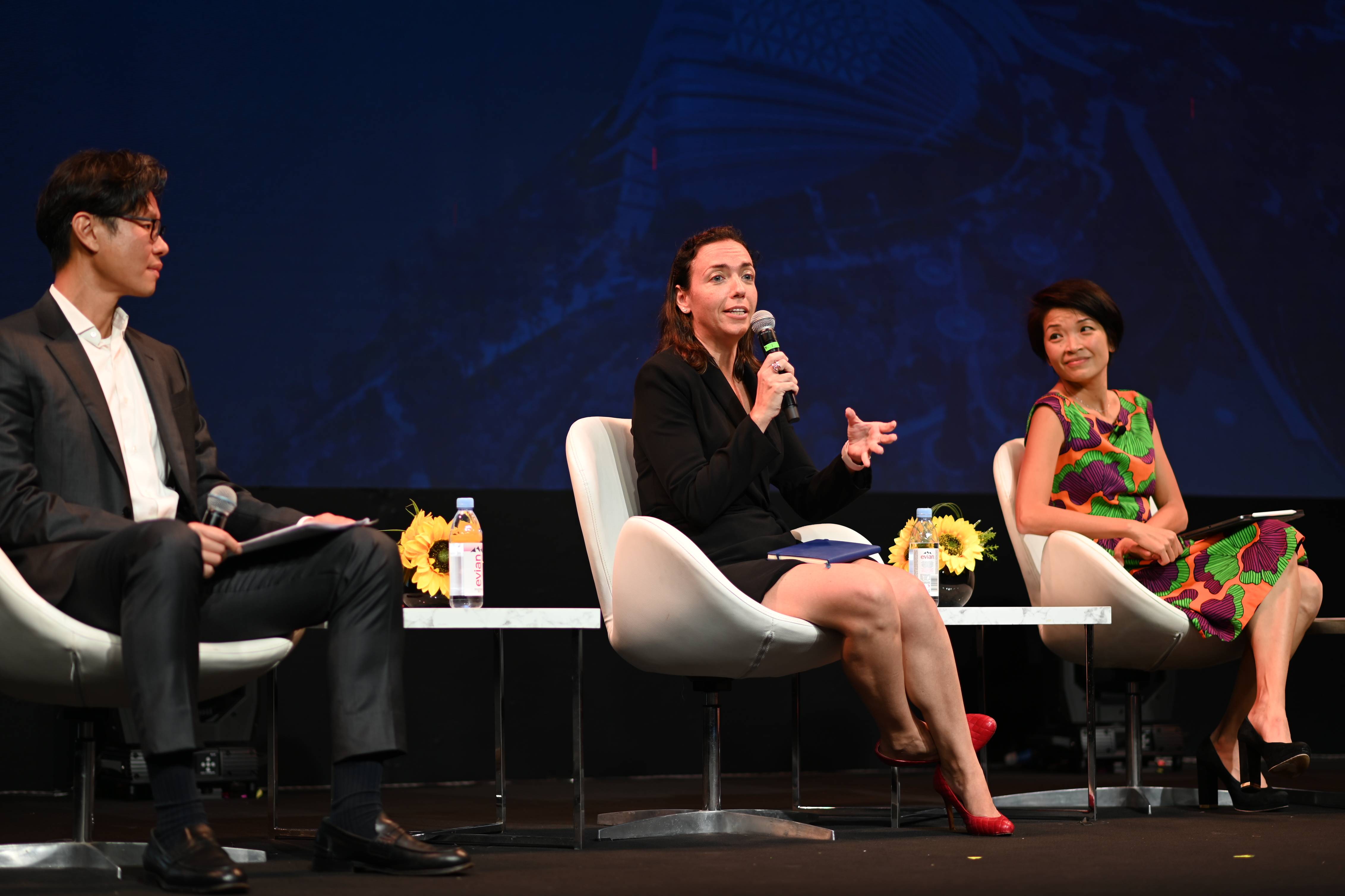 The fourth member of the panel discussing “Maritime Decarbonization – from Pilots to Scale” was Tat Win Law, Singapore Country Chairman for Chevron, who summed up by drawing attention to three P’s: pilots, partnerships and policies.

He mentioned that globally his company is already embarking of what it calls Chevron New Energy and in Singapore it is taking a pragmatic approach to the energy transition, which included joining GCMD.

But ringing in the minds of all delegates – in person or online – must have been the words of Mr Eriksen who prefaced the panel discussions by saying: “The serious push to net zero means that the ASEAN energy co-operation will need to lift its ambitions considerably.

“That means tough policy, but also a huge amount of opportunity for far sighted businesses – in hydrogen, ammonia, and CCS.

“I have no doubt that Singapore will be an important flywheel of change and innovation.”

[1] Pathway to Net Zero DNV: https://eto.dnv.com/2021/about-pathway-to-net-zero
[2] Hydrogen Forecast to 2050: https://www.dnv.com/focus-areas/hydrogen/forecast-to-2050.html
[3] DNV report on the impact of Russia’s war on the energy transition: “The Ukraine war will not derail Europe’s energy transition”.

‘With the acquisition, we are excited to increase our offering […] and expand Stone Oil’s existing distribution and delivery operations,’ said General Manager.