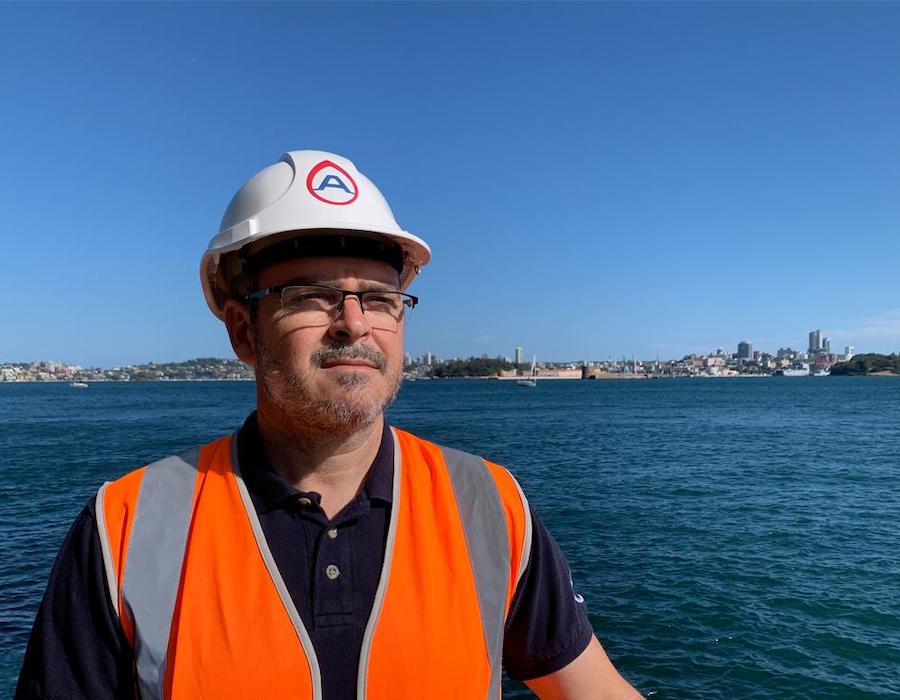 Francisco Malta of VM Industrials, the official distributor for Aderco in Oceania, on Sunday (11 October) published an article on the possible reasons behind off-spec VLSFO due to minor, but decisive, deviations in sulphur content:

Some VLSFOs can be and may become off-spec over time due to total sediment potential, water content, pour points, cat fines, and flashpoints. These are all explicable.

However, the number of VLSFO off-spec due to their sulfur content is extraordinarily high in proportion to other causes and this doesn’t seem logical.

Veritas Petroleum Services (VPS – a lab with 50% of the global market share in bunker sampling), recently published its 10th edition of VLSFO Insights. VPS reported that global VLSFO off-spec samples had increased from 5% to 7% between July 2020 and August 2020, with sulfur content above regulation remaining the number one culprit and not by a small margin. The number of off-spec VLSFOs due to sulfur contents dwarfs all other causes by two, if not three times.

The margins making the sulfur values off-spec are small and often only slightly above the limits permitted. As the IMO rules don’t have much wiggle room, simply crossing that 0.50%-0.53% threshold for supplier and customer may result in fines, costly de-bunkering, and delays.

It doesn’t seem probable for a VLSFO blender producer to go through the trouble of preparing a fuel that is only slightly off-spec, most often by as little as 1, 2, or perhaps 3 percent above 0.50% limit.

This is the one variable in the production that should be under control and not affected by laboratory error or the challenges in the blending compatibilities between feedstocks. These are automated computerised blending programs calculating which feedstocks and sulfur values are required to deliver a compliant fuel.

One element a computer cannot factor is whether there is already residue left from other blends in the storage tanks. Presuming the blending program begins its calculations from zero and assumes the blending and storage tanks are empty. Clearly, this is rarely the case and often there is a growing percentage of residue at the bottom of all tanks that will continue to accumulate in time unless it is removed and cleaned after each batch.

The larger and heavier hydrocarbons chains contain the most sulfur, hence, this is why producers blend heavier fuels with lighter paraffinic feedstocks to achieve the mandated lower sulfur levels.

Over time some of these heavier hydrocarbons will drop by aggregation (TSP) and gravity to the bottom of the tanks. If this is the case, then logically the residues in the tanks will gradually have a higher sulfur content than the fresh feedstock or VLSFO blends being introduced.

This residue is something the blending programs may not factor in.

Thinking about this further, it may be happening throughout the entire supply chain all the way to the ship and its tanks.

As time goes on and the percentage of higher sulfur residue increases in all tanks. A possible scenario could be;

Both these scenarios could leave the supplier and the customer in a predicament situation with neither knowingly at fault.

The complexity of the VLSFO supply chain.

VLSFO producers could potentially adjust for a higher margin of error, for instance, produce a 0.40% S fuel, and perhaps some already do some type of adjustment.

However, producing these fuels is not only costly, but it is also competitive and even a small fraction of a percentage drop in sulfur in a market of this magnitude equates to a substantial reduction in revenue. 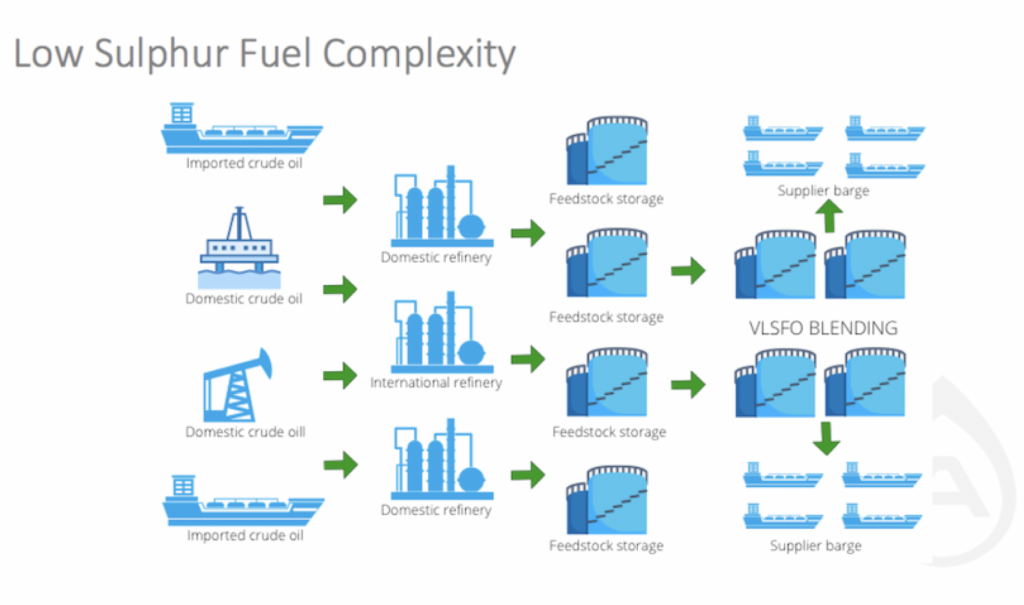 If this theory is correct. What is at stake is the inevitable risk in a relationship breakdown between customers and suppliers without real merit or intention on either part.

This rise in the sulfur content would be incremental and anywhere, yet everywhere. After all the supply chain of a VLSFO is a long and complex one with many storages along the way. An example image above.

The VPS paper also reported that off-spec VLSFO cases due to cat fines had also doubled between July and August.

Cat fines are hydrophilic by nature and in time drop from suspension by gravity as they trickle down following water droplets entering fuels from the condensation in storages.

Therefore, there is a probability that cat fines are also accumulating in tanks throughout the supply chain and the ship. With every bunker and movement, they will become suspended again and eventually drop, slowly increasing in numbers within the residue at the bottom of the tanks.

Again, possibly leading to a sample mismatch with the Bunker Delivery Note.

If this is the case, then what can be done?

Keeping tanks clean throughout the entire supply chain and all the way to the ship is one method, this could be done through periodic manual cleaning. Another option is the use of chemical additives that maintain the VLSFO homogenised. By inhibiting and releasing the aggregation of hydrocarbons and water, ensuring TSP is controlled and the fuel remains water-free.

Ultimately being able to consistently deliver and maintain the VLSFO sulfur content as it was intended and expected by the producer, the supplier, and the ship would bring benefits to all. By avoiding further disruption in the already challenging and new IMO 2020 environment.

However, as in all business cases, the benefits must outweigh their costs.

Disclaimer; These are VM Industrials’ opinions only and do not reflect the opinions of any other parties. This article intends to prompt discussions on these topics within the bunkering and shipping industry.

IBIA seeks to debunk myths spread around the IMO regulations and the 2020 global sulphur cap.

ISO/PAS 23263:2019 has been published and is available to purchase from the ISO website, updates IBIA.

‘The mismatch in requirements between buyers and suppliers is growing,’ says Shell LNG Outlook for 2018 report.