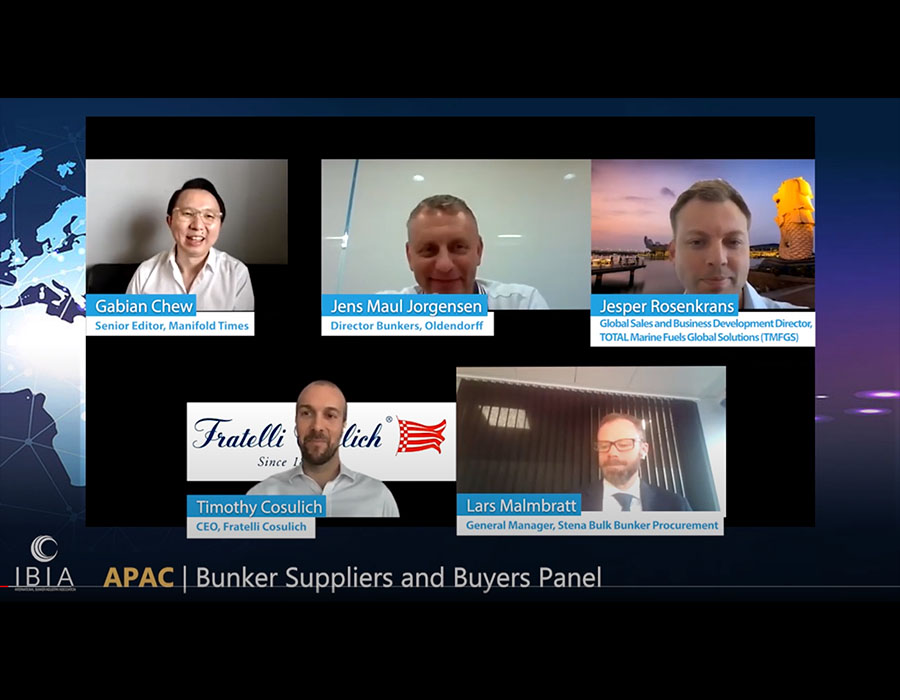 The second day of the International Bunker Industry Association (IBIA) Convention kicked off on Wednesday (11 November, 2020) with the Asia-Pacific edition of the Bunker Suppliers and Buyers Panel.

Jens Maul Jorgensen, the Director of Bunkers at Oldendorff, was glad earlier preparations by the German dry bulk shipowner paid off.

“Looking back, I will not use the word ‘a piece of cake’ but it was much easier than we expected. We closed our IMO 2020 taskforce group in February because it was already done and now we just looking forward to IMO 2030,” he said.

“We have to remember HSFOs have always been a blended but shady product with all kinds of stuff thrown in,” he explains.

“VLSFOs, though also blended, are produced under a more controlled environment. So therefore, I would say it’s much better now than before.”

“There were some bottlenecks here and there in the early stages but as it is right now it went better than we expected actually.”

He believed bunker suppliers have learned from the Houston marine fuel contamination crisis seen in 2017 and have now integrated fuel testing into the operations to ensure the product to be fit for purpose.

“So, now we have seen an improved quality on bunker fuels in general. Energy values have moved up a little bit as well and now we have fewer sulphur issues not only for APAC but also for pretty much all over the world.”

An unusual amount of market dynamics took place in 2020 where issues such as Covid-19, bunker price fluctuations, commodity trading mishaps, and new practises of working from home were introduced.

Timothy Cosulich, the CEO of Singapore bunker supplier and trader Fratelli Cosulich, was keen to share his opinion on the widely reported Singapore commodity trading mishaps.

“It is true that our sector has seen a number of cases, and frauds and bankruptcies and so on. And the problem is that those cases has kind of painted the bunkering industry as an almost undesirable one, from a financing point of view,” he said.

“I challenge that idea because I don’t think that is the case. I’m not denying that there have been cases where banks have lost a lot of money but I do think banks are also responsible to do their own due diligence on their clients.

“In some cases, we know that there were millions, hundreds of millions, of losses hidden for years and I wonder how it is possible for a bank not to check that kind of thing.”

Cosulich, who is the current Vice Chairman of the board at IBIA, and also the Chairman of IBIA Asia, believes the situation could be avoided with a higher level of transparency between financial institutes and their stakeholders.

“I think it is important that there is a bigger shift from the industry point of view where every player has to be prepared to be transparent and share financial information with counterparts,” he states.

“On the other side, banks need to continue to support our industry and at the same time also request a higher level of transparency and governance from players.”

Jesper Rosenkrans, the Global Sales and Business Development Director of TOTAL Marine Fuels Global Solutions (TMFGS), believes a key takeaway for 2020 to be in the choice of business partners.

“It’s hard to mention the last 12 months without mentioning a couple of pretty newsworthy credit related events in our part of the world, though we [TMFGS] haven’t really been impacted by that as a company,” he says.

“Choosing who we work with is probably the most important decision that we make. This is the first decision before any kind of protocols and procedures in place to mitigate risk.

“This has been a year where the importance of that decision has been underlined. And I think that is, for me, one of the big takeaways from 2020.”

The final part of the Bunker Suppliers and Buyers Panel focused on future developments forecast by the panellists. Malmbratt and Cosulich both expect more market consolidation to take place in the coming year.

“In terms of the of the market, I expect more consolidation, we touched the subject on credit and the reliable partners and things like that,” notes Malmbratt.

“I do think that we’re going to see the market moving in the direction of consolidation. The suppliers are talking about having reliable clients, but from our side it’s equally important to have financially sound suppliers that stand up for you.

“We have experienced from past cases where it’s been terrible dealing with bunkering companies that are not performing.”

“I think there will be a move towards, not only more reliable, but certainly more structured bunker traders as well as marine fuel suppliers. I also believe there will be an increased kind of appreciation for more organised players in the bunkering industry,” adds Cosulich.

“On the marine fuels side, one of the big developments this year is the increase in Chinese bunker volumes; particularly at the Zhoushan Ningbo area where we’ve seen quite a lot of growth there and think that’s going to continue. We are happy to be present there as part of a joint venture (Zhejiang Petroleum Marine Fuels Co Ltd),” he said.

“On the longer term, TMFGS has very actively made quite a lot of investments both in Europe and Asia in terms of LNG infrastructure to assist our ship owning clients as part of the expected energy transition in support of shipping’s decarbonisation strategy.

“We’re not suggesting that LNG bunker fuel is the only or permanent solution for all vessels but if you’re looking at investing in a newbuilding program, now or in the coming few years, you’re probably having to decide between oil or gas as fuel because the other technologies aren’t quite ready yet.

“From TMFGS’ point of view, LNG is a very good solution for the transition period until we find a carbon neutral solution to fuel ships. So, that’s what we see happening in the next 12 months and beyond.”