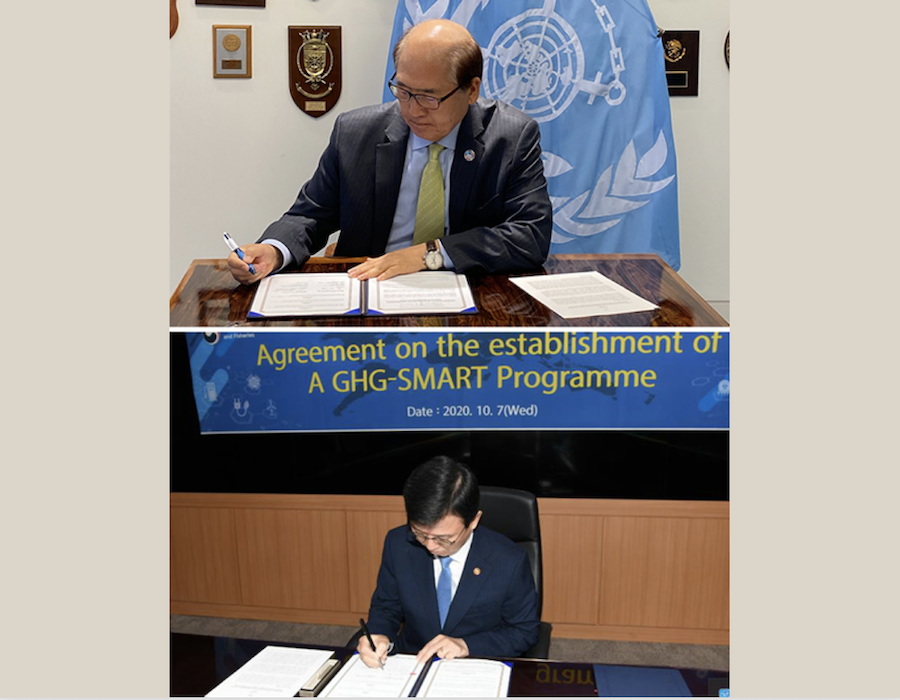 The International Maritime Organisation (IMO) on Wednesday (28 October) said it has signed an agreement with the Republic of Korea to establish a training programme to support developing States to reduce greenhouse gas (GHG) emissions from shipping.

This will facilitate the implementation of candidate measures to be adopted by IMO and the development of national action plans to reduce GHG emissions from the shipping and ports sectors, it said.

This four-year programme will be funded through an allocation of US$2.5 million under the existing Memorandum of Understanding (MoU) between IMO and the Republic of Korea on the Republic of Korea’s contribution to the Delivering Strategy and Reform – Voyage Together Trust Fund (DSR-VT TF).

This will help them to develop their capacity to achieve the goals set out in the Initial IMO Strategy on Reduction of GHG Emissions from Ships.

The IMO said its strategy envisages reducing total annual GHG emissions from ships by at least 50% by 2050 compared to 2008, meaning a reduction in carbon intensity for individual ships and a move to new technologies and low/zero carbon fuels. A number of specific measures are under consideration to achieve the ambitious targets, it added.

The IMO added the strategy recognizes there are potential barriers to achieving the targets and highlights the need for supportive measures, including capacity building, technical cooperation, technology transfer and research and development (R&D), particularly in developing countries.

The four-year GHG-SMART programme will, therefore, support States (specifically, SIDS and LDCs) to address gaps in technologies and policies, by building knowledge and capacity in those countries to identify ways to effectively implement measures contained in the IMO Strategy.

This would be complemented by support and training to develop and implement National Action Plans.

The agreement for the US$2.5 million training programme was signed (on 27 October) by IMO Secretary-General Kitack Lim and the Minister of Oceans and Fisheries of the Republic of Korea Dr. Seong-Hyeok Moon.

Thanking the Government of the Republic of Korea for their generous funding for the programme, Secretary-General Lim said, “If we are to achieve the goals in the initial IMO strategy, then we must ensure that no country is left behind in the transition to carbon-neutral shipping.

“This training Programme will greatly enhance the implementation of the Initial IMO GHG Strategy, especially when it comes to building knowledge and capacity  in SIDS and LDCs.”

“The Republic of Korea is fully supportive of the Initial IMO Strategy on reduction of GHG emissions from ships and the emphasis on its ‘Voyage Together’ approach,” added Dr. Moon.

“The Government of the Republic of Korea hopes that this GHG SMART Training Programme will be the beginning of a concerted effort to assist the SIDS and LDCs with the implementation of the IMO Strategy.”

About GHG-SMART training and capacity building

Training packages will be developed to cover a range of activities, including analysis and review of current policies, update on IMO regulations, how to develop national action plans, training of trainers to implement specific measures such as data collection, sharing of information and best practices.

It is envisaged that participants will come from a range of different stakeholders, including policy makers, public authorities and industry (shipping, ports and ship building).

The training will also facilitate transfer and uptake of energy efficient technologies, filling gaps in technology and policies between developed countries and the LDCs and SIDS.

The Programme will be strategically linked to the ongoing and proposed major projects implemented by IMO to achieve GHG emissions reduction. These include the Global MTTC Network (GMN) project, funded by the European Union, which unites Maritime Technologies Cooperation Centres (MTCCs) in targeted regions into a global network; and the GreenVoyage2050 Project , a partnership project between the Government of Norway and IMO, which is working with 12 pilot countries in different regions to meet climate change and energy efficiency goals related to international shipping. There will also be cooperation with the World Maritime University (WMU) for technical input, and IMO’s Integrated Technical Cooperation Programme (ITCP).

Further information on the four-year GHG-SMART programme is available here.