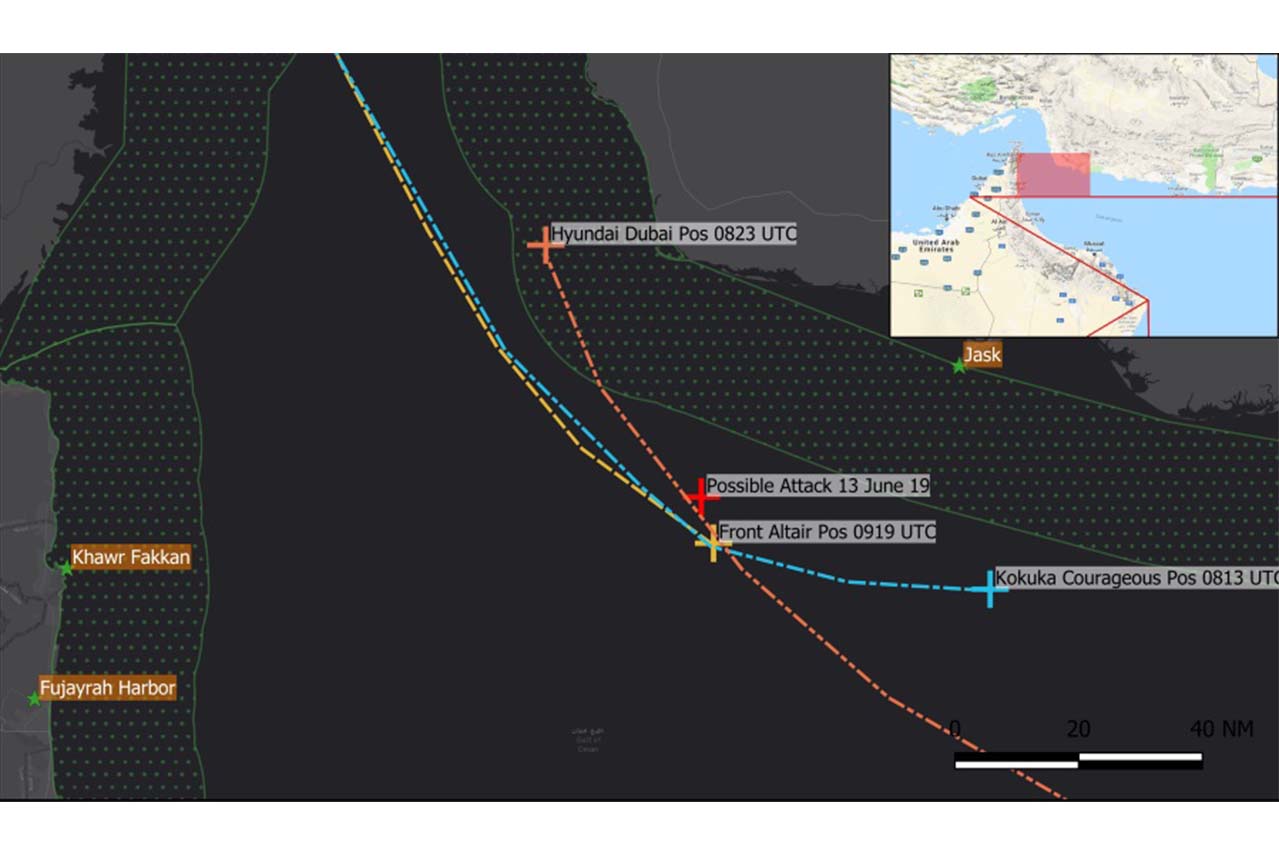 UK-based specialist maritime operations company Dryad Maritime on Thursday (13 June) released an incident update and analysis report focusing on the recent attack of a crude oil tanker and a chemical tanker at the Gulf of Oman:

Front Altair was believed to be fully laden when the attack took place, resulting in a large fire and the crew being forced to abandon ship. Reports indicate that the cargoship Hyundai Dubai aided in the rescue effort.

Reporting suggests that 21 members of crew have been evacuated from Kokua Courageous, and the crew are believed to have reported that its cargo of methanol is intact. Additional but unconfirmed reports have been received by Dryad sources indicating that IRGC vessels were the first vessels on scene to offer assistance. It is believed that this assistance was refused by the crew of the Front Altair, however unconfirmed reporting indicates that the crew of the Kokuka Couragous may have been taken to the Iranian Port of Bandar-e-Jask.

Both vessels appear to have indicated that they believe the attack originated from the surface, however further reports from the Front Altair indicate that the hull was breached on the starboard side partially below the waterline.

The incident was initially primarily reported by the UK Maritime Trade Operations (UKMTO) and the US 5th Fleet, which is believed to be in attendance at the scene.

Iranian media reports have claimed that Front Altair has sunk, however Frontline which operates the vessels has denied that this is the case at 0957 UTC.

This latest incident has occurred one month and a day from the previous incidents where four vessels were targeted within the Fujairah anchorage. The latest incident has caused a steep price rise in oil, and Brent Crude has rose 3.85%, standing at $62.28 USD as at 1153 UTC.

Incidents of this nature in relative close proximity are extremely worrying, and are indicative of rising tensions in the region. On a broader regional scale, the attack will serve to deepen tensions between Iran and the US, which have gradually escalated throughout 2019.

It is a realistic possibility that Iran or a proxy were behind this attack, however the situation remains fluid and there are a number of competing naratives that require examining. It is important to note that the attack on the Front Altair is reported to have struck the starboard side of the vessel, which was travelling in a southerly direction. Any Iranian involvement either directly or via a proxy is unlikely to have conducted an attack from the port side, as this would immediately give rise to allegations of Iranian shore launch projectiles would require Iran to refute blast diagnostic evidence from the outset. Thus far the methodology of a starboard side attack is consistent with what would be expected of Iranian involvement. The reported involvement of Iranian vessels in the rescue effort may also be an attempt to obscure intent in the aftermath of the attack however this cannot be confirmed.

However, any assessment of Iranian involvement must be contextualised, and must be analysed through the prism of self-interest and motive. States such as Iran are rational actors, and will not conduct attacks in the Strait of Hormuz merely to ‘disrupt’ global shipping, without there being a clear national interest in doing so. At a time where the Iranian economy is struggling and sanctions are biting, it seems surprising that Iran would endeavour to conduct such a bellicose strategy. It would also be remarkable that Iran would knowingly target vessels reported to be carrying ‘Japan-related cargo’ at the same time that the Japanese Prime Minister Abe is conducting talks in Iran. These inconsistencies in terms of interest and motive do not rule out Iranian involvement, but they do suggest that a wider regional narrative may be at play, and that the responsible party could in fact not be Iranian once a further investigation is completed. It is important to note that despite recent events pointing to Iranian involvement, no key lines of evidence indicating responsibility or intent have been identified. Whilst the security threat which the incident poses can be quantified and responded to, the underlying details are still emerging, and will continue to be assessed by Dryad.

In the short term, the threat to vessels in the Strait of Hormuz has undoubtedly risen, however this is still a localised event, and is likely not to be part of a pattern of events which will develop in the next 72 hours. Dryad deems that the threat from this event does not span into the wider Gulf of Oman, and vessels transiting through the Gulf are deemed to be safe. Vessels are advised to follow BMP5 best practice, and request routinely updated security briefings, when transiting the Strait of Hormuz.

Infineum B201 designed for marine fuel stability and compatibility