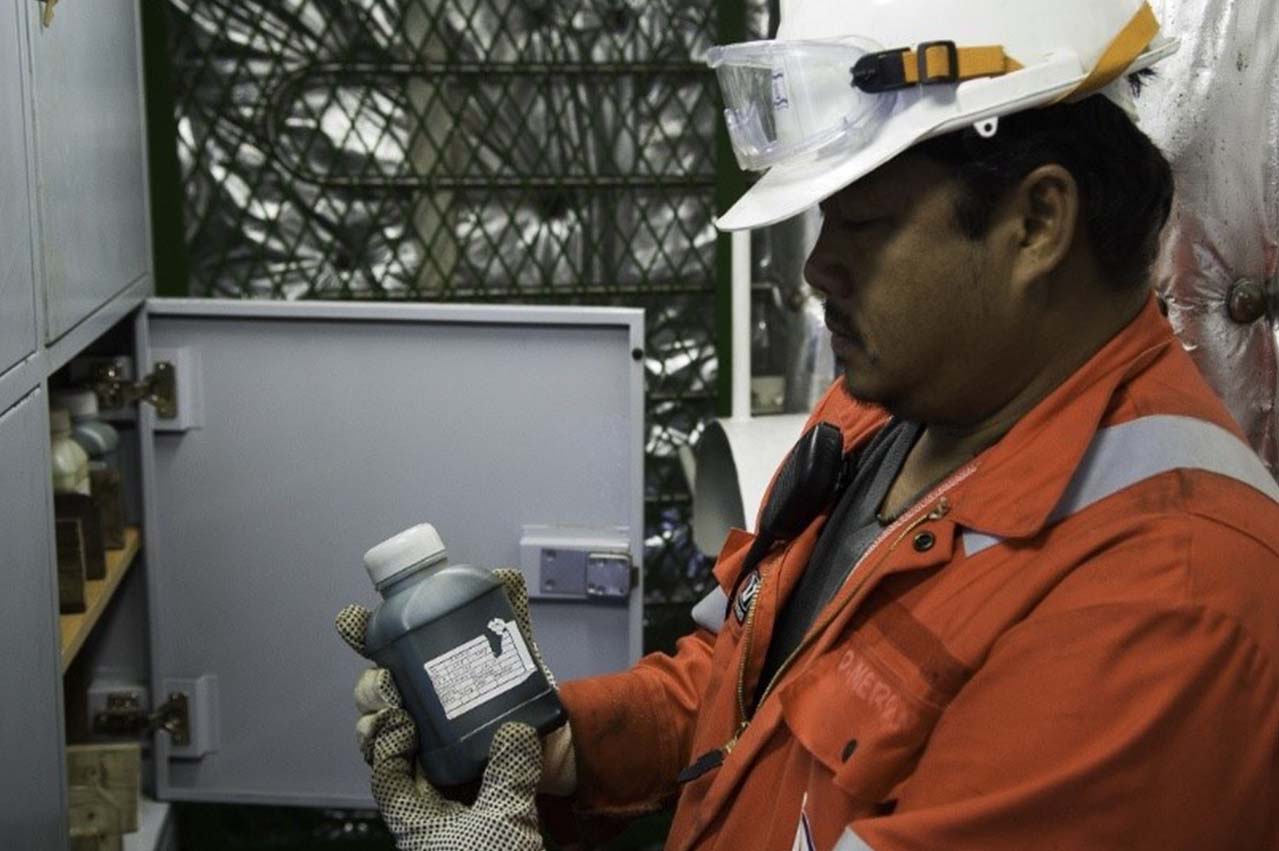 The following article and image showing how proper onboard procedures and a well prepared and attentive crew can be crucial in avoiding unwarranted penalties first appeared in the INSIGHT magazine of P&I Club Gard:

The ECAs are still relatively limited in terms of geographical scope whilst compliance with the global 0.50% sulphur cap involves much larger quantities and different types of fuels. Hence, it is anticipated that the frequency of PSC requests to take spot samples of ships’ fuel oil will increase significantly after 1 January 2020 and shipowners should prepare their ships and crew accordingly. The IMO’s adoption of a prohibition on the carriage of non-compliant fuel oil from 1 March 2020, the so called ‘carriage ban’, is also expected to drive the requirements for further sampling by PSC.

There is no doubt that PSC will play an important role in the enforcement of the 2020 global 0.50% sulphur cap. However, while many PSC regimes are investing heavily in training and education of their inspectors ahead of the regulatory changes, others may not be equally well prepared for their new inspection tasks come 1 January 2020. The cases reported below demonstrate that even PSC inspectors make mistakes from time to time. And when such mistakes are the reason for ships being penalised – proper onboard procedures and a well prepared and attentive crew can make a big difference in changing the outcome of a case.

A ship entered with Gard was recently fined in an EU port for “using marine fuel with a content of sulphur higher than the restriction established by law (0.10%) in port”. A sample had been drawn from the fuel oil system while the ship was at berth and testing established that the sulphur content of the sampled fuel exceeded the 0.10% limit. The test results came as a complete surprise to the ship’s crew. According to the Chief Engineer, the ship’s auxiliary engines had been running on compliant marine gas oil (MGO) at the time of the inspection. This statement was supported by entries in the ship’s log-books, which showed that a successful change-over to MGO had been completed in line with the port’s requirements, as well as the bunker delivery note for the MGO, which showed that its sulphur content was well below the required 0.10% limit.

Further investigations revealed that the ship’s fuel oil supply unit for the main engines had also been running at the time of the PSC inspection, but only in re-circulation mode as part of the procedures for securing the main engines after stopping. The shipowner therefore concluded that it was very likely that the inspector had sampled fuel from the ‘wrong system’ and that the sample did not represent the fuel burned while the ship was at berth. Additional testing of the ship’s duplicate fuel sample supported this conclusion, the fuel in the bottle was HFO, not MGO. It appears in this instance that our Member may have been penalised because of a mistake made by the PSC inspector.

Case 2 – a picture is worth a thousand words

In another case, also in a port in the EU, a routine port state control inspection of a ship included the taking of a fuel sample. And, like the previous case, when the sample was tested, the sulphur content of the sampled oil was above 0.10%, and a fine was levied on the ship. In this case our Member was able to document that the ship had bunkered and burned only compliant ultra-low sulphur fuel oil (ULSFO) for the previous two years. From the shipowner’s perspective, it was therefore quite clear that the ship’s fuel oil could not possibly contain the stated sulphur levels.

Sulphur inspections – issues to be aware of

A ship may be targeted for a sulphur inspection for various reasons, e.g. the existence of a previous non-compliance or warning received concerning its fuel, the ship is scheduled to bunker at a specific port, or as part of a maritime safety administration’s enhanced verification programme – or just randomly in order to reach an overall percentage inspection rate set by the PSC.

For the vast majority of ships that plan to meet the 2020 requirement by burning low sulphur fuel, PSC has essentially two methods of establishing whether a ship is compliant:

1) Verify the sulphur content of the ship’s fuel, e.g. by reviewing procedures, bunker delivery notes (BDN), log book recordings, analyse the MARPOL delivered sample, and taking additional samples at different locations of the fuel oil system.
2) Measure the sulphur content in the ship’s exhaust gas, e.g. by use of remote sensing equipment such as sulphur-sniffing drones or similar monitoring equipment placed at strategic locations on shore.

Much of the compliance with MARPOL Annex VI is documented by recordkeeping. It will therefore be important to ensure that that all MARPOL Annex VI documentation is complete and up-to-date prior to a port entry. Results from Tokyo MOUs concentrated inspection campaign in 2018 show that missing BDNs was one of the most notable deficiencies found during the campaign. Regulation 18.6 of MARPOL Annex VI requires BDNs to be retained onboard for a period of three years after the fuel has been delivered onboard.

In the shorter term, PSC may also consider ship implementations plans (SIP) when verifying compliance with the 0.50% sulphur limit requirement. A ship with a suitably developed SIP, and a clear record of the actions taken in order to be compliant, should be in a better position to demonstrate to PSC that the ship’s crew and managers have acted in good faith and done everything that could be reasonably expected to achieve full compliance. A SIP is, however, not mandatory and therefore, the absence of such or incorrect entries etc. should not form the basis for a PSC deficiency.

The use of remote sensing equipment and portable handheld fuel analysers is likely to become increasingly common during initial inspections by PSC. As an example, the Danish Maritime Authorities recently announced that a sulphur-sniffing drone is already in use to check emissions from ships in Danish waters. When the drone enters a ship’s exhaust gas plume, it can register the amount of sulphur in the fuel and make the data immediately available to Danish authorities, who can follow up if a ship does not comply with the applicable requirements. Results from a campaign carried out in the Danish Port of Aarhus in 2018 is available HERE.

The ship’s crew should, however, be aware that the results from such equipment may be of an indicative nature only and should not necessarily be accepted as the sole evidence of non-compliance. PSC inspectors are, however, likely to consider such results to be ‘clear grounds’ for further inspection.

Given ‘clear grounds’ to conduct a more detailed inspection, PSC may require samples of fuel oils to be analysed at a fuel testing laboratory. This could be either the representative samples provided with the BDN, or spot samples of fuel oil drawn from a ship’s fuel oil lines and/or tanks.

Where the MARPOL delivered sample required under Regulation 18.8.1 is taken from the ship, a receipt should be provided to the ship. Where spot samples are drawn from the ship’s fuel oil lines or tanks during the inspection, the Chief Engineer should be present at all times to verify that samples are drawn at the right location and in the correct way. The Chief Engineer should also inspect the immediate quality of the sample, verify that each sampling bottle is properly labelled and make sure the ship’s own samples are retained onboard. It is important that the PSC inspector reports information such as the sampling point location where the sample was drawn, date and port of sampling, name and IMO number of the ship, and details of seal identification.

A new retroactive requirement in MARPOL Annex VI to designate, or if necessary fit, sampling points to facilitate the taking of spot samples onboard ships was agreed during the sixth session of the IMO sub-committee on Pollution Prevention and Response (PPR 6) in February 2019. Subject to approval by the MEPC 74 in May 2019, ships will be required to designate, and clearly mark, sampling points no later than the first IAPP renewal survey that occurs 12 months or more after the entry into force of the amended regulation.

When designating the sampling points shipowners should consider the “2019 Guidelines for onboard sampling for the verification of the sulphur content of the fuel oil used on board ships”, also agreed at PPR 6. Although the guidelines are a recommendation only, they set out an acceptable sampling method for inspectors to determine the sulphur content of fuel oils, both with respect to location of sampling points and handling of the samples.

Despite ongoing preparatory work within the IMO and the publication of numerous guidances by classification societies and other industry stakeholders, shipowners still face a range of uncertainties and potential operational risks post-2020. Fuel prices in 2020 are a big unknown. Understandably, most shipowners worry about an increase in costs in an already difficult economic environment. Equally high on shipowners’ agenda are issues related to the availability of low sulphur fuels and the quality of new fuel blends. Compatibility between fuel batches is a serious safety concern, and so is the long-term stability of some of these new fuels. For those that have invested in exhaust gas cleaning systems (scrubbers), it will be particularly important to keep a close eye on the local regulation of wash water discharges from open-loop scrubbers.

Shipowners can, however, be fairly certain of one thing: PSC will start enforcing the cap from 1 January 2020, whether the industry is ready or not! Hence, when preparing fleets and crews for compliance with the 2020 global sulphur cap:

Remember, without proper evidence, the chances of the shipowner losing the claim in a disputed case are high.

‘We plan to fully leverage what has become an improved market through multiple opportunities,’ says Chairman and CEO.