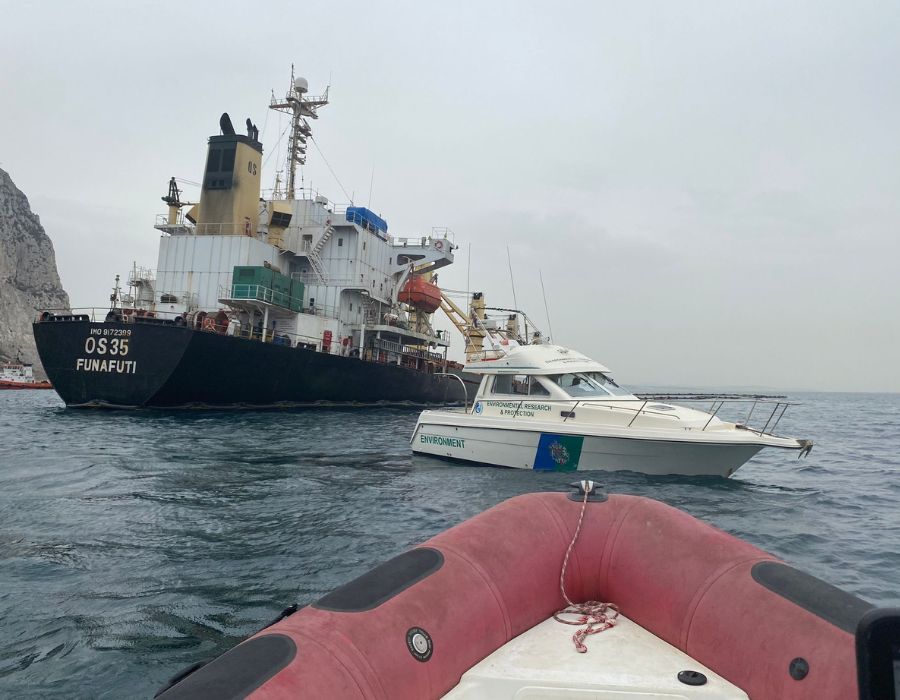 Tuvalu-flagged bulk carrier OS 35 is currently beached after colliding with LNG carrier ADAM LNG in the Port of Gibraltar, according to the Gibraltar government on Tuesday (30 August).

The incident took place after OS 35, which was loaded with steel rebars, clipped ADAM LNG as the former was manoeuvring to exit the bay to head to Vlissengen in the Netherlands.

The Gibraltar Port Authority then directed the vessel OS 35 to the Eastside in order to ensure it could be beached to minimise the risk of the vessel sinking and to secure the lives of the mariners on board.

“A survey inspection by a specialist team of divers this morning has confirmed that the OS 35’s bulbous bow is currently submerged 1.2 metres into the sandy seabed,” said the Gibraltar government.

“There is significant damage to the vessel’s starboard side, including a gash amidships, below the waterline, measuring approximately 10 metres by 4 metres.” All crew members are safe and well, with no injuries reported, and are remaining on board.

Meanwhile, the ADAM LNG appeared to have suffered no significant damage, except for a superficial dent to its bulbous bow, it added.

“No injuries have been reported among the crew and there has been no water ingress. This has been confirmed by divers and by an internal survey,” said the government.

According to the latest statement by the government, the 24 crew, who are still on board the OS 35  at the request of the Captain of the ship, continue to report as being safe and well. It added assets were available at the scene to evacuate the ship if necessary.

Mohd. Rusdi Mohd. Joha received bribes totalling RM 8,000 for not taking action on a vessel owned by a shipowner over failure to provide documents.