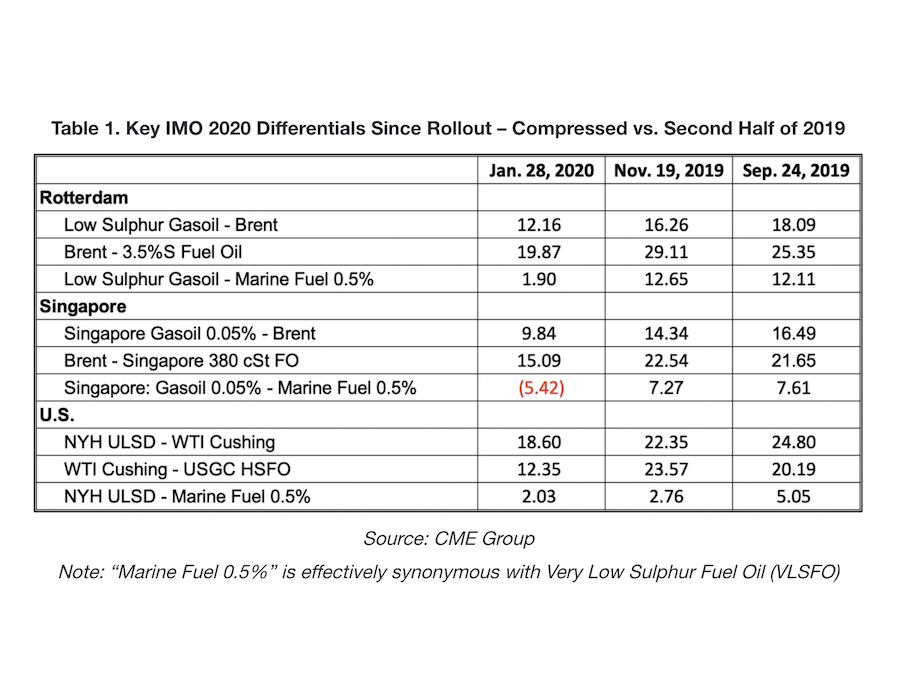 Transportation fuels consulting firm Stillwater Associates has published an article outlining their analysis on the IMO 2020 transition while offering insights of future changes, it has been written by Senior Associate Ralph Grimmer:

Over the past three years, Stillwater Associates has offered a series of articles on various aspects of IMO 2020. The long-awaited IMO 2020 regulations were implemented on January 1, 2020 – 40 days ago. In this article, we will provide our takeaways on how the initial rollout has gone, a recap of strategies/tactics that refiners are now executing, and a glimpse at further changes to come.

Stillwater Takeaways on the Initial Rollout of IMO 2020

Without question, the biggest surprise from the rollout of IMO 2020 is what hasn’t happened. Futures markets as recently as mid-November 2019 reflected much larger key price differentials early in the IMO 2020 rollout in Rotterdam, Singapore, and the U.S. than what has transpired thus far. Comparing snapshots of the March 2020 contract on the CME futures market taken November 19th and September 24th of 2019 with those from January 28th of 2020, the differences are compelling (all figures are $/bbl):

Across the board, the March futures price differentials from January 28, 2020 are far smaller than for both November 19th and September 24th of 2019. The size of the IMO 2020 “speed bump” at initial rollout is markedly smaller than expected!

The figures below provide current futures market snapshots from March 2020 through December 2021. It’s quite apparent that futures price differentials are compressed in early 2020, gradually widening to more historic levels by early 2021.

An early surprise that began in December 2019 was the strength of the VLSFO market. At one point, VLSFO prices (on a $/bbl basis) were higher than gasoil in both Rotterdam and Singapore. This is still the case in Singapore. Prevailing wisdom had been that VLSFO would trade at a price discount to gasoil.

From an operational perspective, the shift of notionally 75% of the open-ocean marine fuel from High Sulfur Fuel Oil (HSFO) to either VLSFO or Marine Diesel Oil (MDO) has proceeded much smoother than most industry observers expected. There have been very few reports of enforcement action taken against vessels for non-compliance with the sulphur cap.

There are, however, still valid concerns over the consistency of VLSFO quality. The three specs we’ve been hearing about most often are sediment, compatibility, and stability. Thus far, we are unaware of any vessel-operating problems caused by the use of VLSFO. However, this is an issue worth keeping on the radar screen.

There are ports in more than 20 countries that have regulated or banned operations of open-loop scrubbers in port areas.

Not all signatory countries to MARPOL Annex VI have put in place regulations for their individual countries compelling compliance. This could become a nuisance because a level playing field is not yet quite in place.

During the run-up to IMO 2020 implementation, many observers suggested that vessel operators would likely be motivated to employ slow steaming tactics to optimize operating costs versus revenue. From our research, shipowners have not embraced slow steaming very much over the past few months.

Stillwater assessed the future world of simple and complex refineries in previous IMO 2020 newsletter articles – one on Refiners’ Perspective and another focusing on how changes to crude slate pricing would force refiners into a “Choose Your Own Adventure” decision-making process. Simple refineries that produce HSFO are faced with the challenge of finding new homes for the displaced HSFO. The global HSFO market has shrunk by about 2.7 million barrels per day (MMBPD) with the rollout of IMO 2020. (Clearly, this figure depends on how much deliberate non-compliance is actually occurring.) Selling cutback high sulfur resid to other refiners or selling HSFO to power plants are certainly two options; neither of these options is as good as the former option of selling HSFO for bunker fuel.

Complex refineries (i.e. refineries with resid upgrading) have more freedom. They can:

Marathon (on the U.S. West Coast) and Valero (on the U.S. Gulf Coast) have told securities analysts that they are processing purchased cutback resid in the refining networks.

Refineries with Vacuum Gas Oil (VGO) hydrotreating capability are currently finding it may be attractive to sell a portion of this nominal 650-1,050+° F stream rather than processing all of it on a cat cracking unit that is focused on producing gasoline. Both Valero and Marathon are selling VGO into the VLSFO blend pool. These economics depend on the VLSFO – RBOB price differential. Valero indicated to securities analysts last October that selling VGO for more than $5.00/bbl above than USGC RBOB was an opportunity to capture.[1] Valero has also indicated that they are selling some volumes of low sulfur Atmospheric Tower Bottoms (ATB) into the VLSFO blend pool.

Changes Yet to Come

Implementation of IMO 2020 thus far has not produced the much wider key crude oil and refined products price differentials that many industry observers had expected. Even so, IMO 2020 is still likely to be one of the most impactful refined product specification changes ever, largely because the change was both global and instantaneous. VLSFO has replaced HSFO as the preferred marine fuel for the majority of the world’s open-ocean marine vessels. More than two million barrels per day of HSFO has been displaced from the 2020 open oceans marine fuel pool by IMO 2020. It’s not clear that dependable new distribution channels have been developed for this entire ongoing volume of displaced HSFO. There may yet be marketplace bumps in the weeks ahead.

VTTI will be owned 10% by ADNOC, 45% by IFM Global Infrastructure Fund, and 45% by Vitol after development.

Due to Covid, the port officer cannot attend to vessels and the Port Authority of New South Wales has issued revised guidelines for processing Hotwork and Bunker permits.