Bunker Holding came out of the financial year with the Group’s second-best result to date. Bunker Holding increased its EBT by 49% from DKK 445 million to DKK 664 million despite a year marked by instability in the form of rising raw material and energy prices and the war in Ukraine.

The statement also noted the serious case of Bunker Holding and subsidiary Dan-Bunkering which were convicted of inadvertently violating EU sanctions on Syria in December 2021, which greatly affected the company financially: 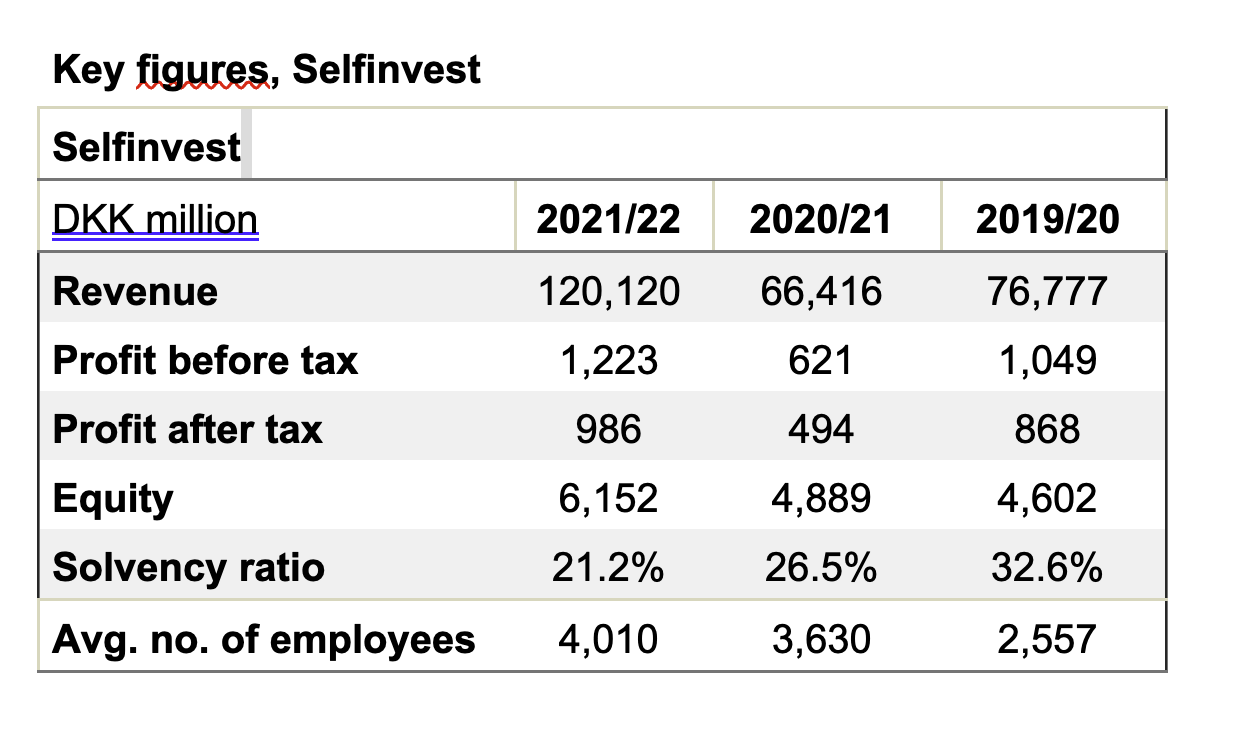 Selfinvest managed to increase momentum and growth despite a year characterised by volatility. The Group’s profit was largely driven by Selfinvest’s financial investments and impressive results from USTC companies Bunker Holding, SDK FREJA, and CM Biomass.

“We are very proud of the result that we can present for the 2021/22 fiscal year. The company’s EBT is very impressive and amounts to more than DKK 100 million per month. This past year was challenging in many ways, but our growth strategy has yet again proven very successful. I am particularly pleased by how all our internal and external stakeholders have supported us through a difficult year,” says co-owner Torben Østergaard-Nielsen.

In recent years, the Group has pursued a comprehensive growth strategy to widen and strengthen its portfolio through diversification. USTC has grown several of its entities, which solidifies and strengthens its position. In addition to expanding its market positions, the Group has grown its employee base to more than 4,000 globally.

2021/22 was SDK FREJA’s first consolidated financial year with FREJA fully integrated, and the company announced its finest financial performance to date on the backdrop of congestion in global logistics chains. SDK FREJA increased EBT by 294 percent to DKK 244 million.

While the global market for wood pellets has been heavily undersupplied, CM Biomass maintains momentum with a 78 percent increase in volume and an EBT of more than DKK 170 million. Unit IT experienced growth with the acquisition of solvo it, increasing Unit IT’s revenue by more than 25 percent to DKK 202 million. Selected Car Leasing presents its best result to date with a revenue of DKK 1.4 billion, which is an 87 percent increase in revenue compared to the previous fiscal year. In a hard-pressed tanker market, Uni-Tankers delivered an increase in revenue by more than DKK 200 million.

Selfinvest has sustained its upward trajectory through its investment across five portfolios, including direct investments in growth companies, real estate and private equity funds, as well as equities and bonds. The return on the invested capital is 19 percent, which is very satisfactory as the Group has managed to expand momentum despite challenging market conditions especially towards the end of the fiscal year. Selfinvest has gradually achieved a robust portfolio through risk diversification, and the result must also be seen in the light of the long-term investments the Group has made in recent years.

IN THE WAKE OF A CHALLENGING YEAR

Due to strong business acumen, the Group’s entities succeeded in navigating through a turbulent year mainly characterised by the aftereffects of the global pandemic, global supply chain disruptions and congestions, and a rise in raw material and energy prices.

Following the tragic events of the invasion of Ukraine by Russia, USTC entities have also closed several offices and terminated business and operations with and in Russia.

“We are very experienced in adapting to new market circumstances as they arise, even during challenging times. Our ability to make quick and agile decisions at the right time has been instrumental in securing an impressive financial performance. Our result is very much a testament to our capable and dedicated employees who have pulled together and worked so hard to ensure we have stayed the course and landed this great result,” says Torben Østergaard-Nielsen.

Bunker Holding came out of the financial year with the Group’s second-best result to date. Bunker Holding increased its EBT by 49 percent from DKK 445 million to DKK 664 million despite a year marked by instability in the form of rising raw material and energy prices and the war in Ukraine. In December 2021, Bunker Holding and subsidiary Dan-Bunkering were convicted of inadvertently violating EU sanctions on Syria. A serious case that has taken a heavy toll in terms of resources and also financially. The entire organisation has learnt from the case, and Bunker Holding has further strengthened its compliance and sanctions systems across the Group. Bunker Holding has expanded its position as the world’s leading bunkering company with a volume growth of 3%, which is a strong indication that it continues to enjoy the support of all stakeholders.

SDK FREJA is a full-service logistics and shipping company with 1,350 employees and operating in eight countries. SDK FREJA’s main activities include freight forwarding within Road, Air & Sea, Project, Logistics, as well as Stevedoring, Agency, Customs Clearing, Commercial Chartering, Liner and Cruise services. The financial year 2021/22 was a milestone for SDK FREJA with the company’s first consolidated financial report and the best result to date. EBT grew to 244 million from 62 million compared to the previous fiscal year, corresponding to an increase of 294 percent. At the same time, revenue increased by 128 percent to DKK 6 billion.

CM Biomass works with a variety of clients across several markets trading more than 3.5 million tons of industrial and premium grade pellets per year. CM Biomass, which employs more than 145 dedicated professionals in 10 countries, grew from the family-owned Copenhagen Merchants Group; both of which are under management by second generation owner Simon Rodian Christensen. CM Biomass can present a revenue of more than DKK 3 billion and an EBT of DKK 170 million in the period from when USTC became the majority owner.

Uni-Tankers is a leading tanker shipping company in the intermediate and small tanker segment. The fleet is one of the youngest in its core market and comprises more than 40 owned and chartered modern and flexible product and chemical tankers. The company has offices in Denmark, Turkey, France, and the US. Despite a tanker market defined by very low rates, Uni-Tankers was able to increase revenue this financial year to DKK 1,461 from DKK 1,250 million last year. EBT was a negative DKK 33 million. Uni-Tankers finished the year very strongly with the last three months delivering positive net income. The outlook for the current fiscal year is very positive.

Unit IT includes a wide range of advanced services in infrastructure and private and public cloud solutions, including specialist units in cyber security, business intelligence, and data platform. Unit IT is based in Denmark and has six offices across the country. Unit IT can present an EBT of DKK 21.9 million for the financial year 2021/22. Unit IT are very satisfied with the result, which is characterised by growth through acquisitions and expansion of business areas. At the same time, revenue grew 26 percent to DKK 202 million compared to 2020/21.

Selected Car Group is a car universe that consists of Selected Car Leasing, which specialises in leasing cars within the premium segment, and Selected Car Investment, which buys and sells investment cars worldwide and in addition offers investment funds where new and existing customers can invest in a unique portfolio of cars. Selected Car Group’s third business is Selected Car Collection, which houses one of Europe’s finest car collections and facilitates events.

2021/22 marked a new record year for Selected Car Leasing. Now Denmark’s largest leasing company within the luxury and sports segment of cars, Selected Car Leasing can for the first time present an annual result with a revenue of more than DKK 1 billion. Selected Car Leasing achieved a substantial 87 percent growth in revenue compared to the last fiscal year and an EBT of DKK 20 million, corresponding to an increase of 65 percent.

The current financial year has come off to an outstanding start for Selfinvest and USTC, and although we foresee a challenging year, our expectations for financial year 2022/23 are positive.

Photo credit: USTC include both photos inside
Published: 22 June, 2022