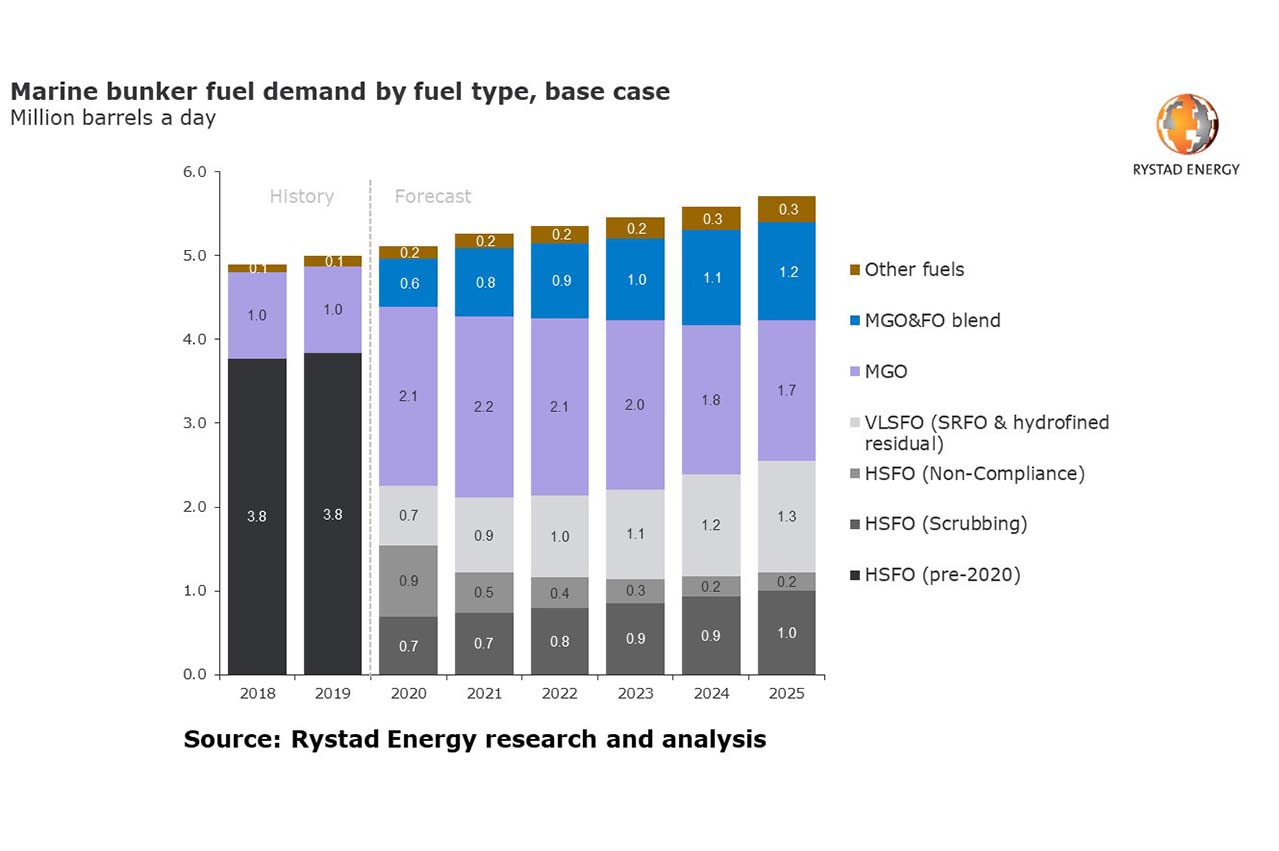 On January 1, 2020, the International Maritime Organization’s (IMO’s) bunker fuel regulations come into effect. The sulfur content limits in bunker fuels used outside the designated Emission Control Areas (ECAs) will be reduced to 0.5% (from 3.5%) to reduce air emissions from shipping.

Our base case forecasts a volatile transition with a mix of these three options.

As illustrated in the figure, we estimate that around 700,000 bpd of very low-sulfur fuel oil (VLSFO) will be available in 2020, rising sharply to 1.3 million bpd in 2025. In 2020, we estimate that another 600,000 bpd of marine fuel demand will be satisfied by blends manufactured from existing low-sulfur fuels, middle distillates and high sulfur fuel oil, which we call “MGO & FO blend”. The share of VLSFO and other compliant fuel oil blends will be initially low, as ship owners seem reluctant to adopt the new fuel immediately; first, they aren’t confident that these fuels will be widely available already in 2020, and second, because they are unsure if the low sulfur fuel oil offered at different ports will be compatible.

A small share (15,000 bpd) of the marine fuel demand will be met by other fuels such as LNG. The remaining 1.5 million bpd of the bunker market is expected to continue using HSFO through the installation of scrubbers and non-compliance.

We estimate that by end-2020 there will be around 2,800 scrubbers installed consuming 690,000 bpd of HSFO. In addition, we expect non-compliance to retain 860,000 bpd of HSFO demand in 2020. This will come from areas where compliant fuel will not be readily available, or with low monitoring.

The Standard Club advises members with ships fitted with scrubbers and calling at the Port of Karachi to take note of the attached circular and comply with local regulations.

Papers submitted to PPR7 questioning use of scrubbers as alternative compliance mechanisms for IMO 2020 regulations.

Is blending fuel on board allowed to achieve IMO 2020 compliance?

Christian Baekmark Schiolborg of BIMCO explains whether on board blending can be considered compliant.