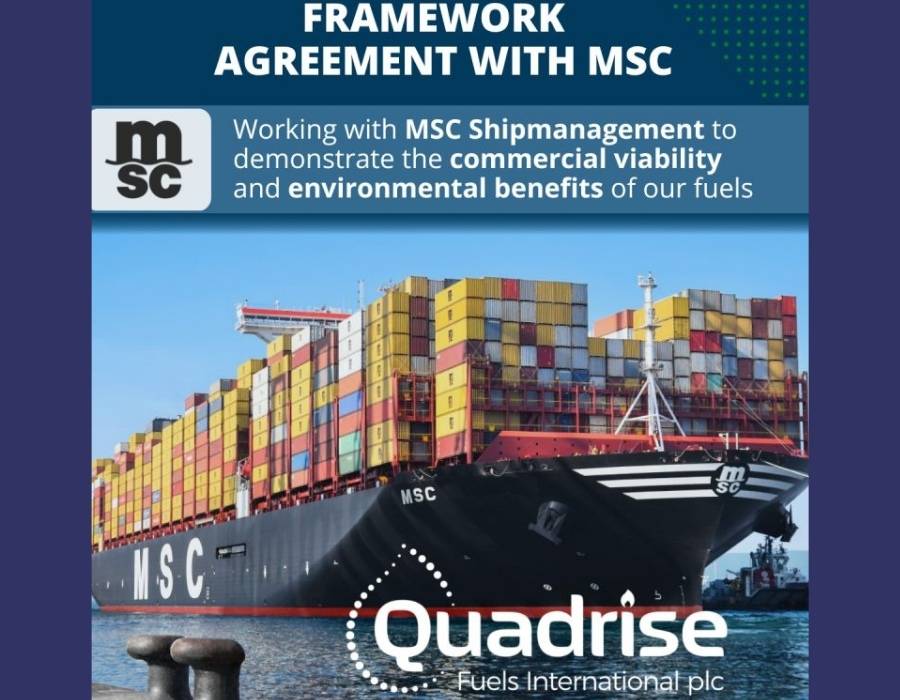 Quadrise Fuels International (Quadrise), the supplier of MSAR® and bioMSAR™ emulsion technology and fuels, on Wednesday (27 July) said it has signed a Framework Agreement with MSC Shipmanagement Limited of Cyprus (MSC Shipmanagement) to test the use of low-carbon bunker fuels on one or more containerships.

Under the Agreement, proof-of-concept tests and subsequent operational trials will be carried out using both bioMSAR™ and MSAR® fuel on one or more commercial container vessels, as essential precursor steps to the intended commercial supply of these fuels to MSC’s global fleet.

The proof-of-concept (POC) tests for each of bioMSAR™ and MSAR® will be conducted on a vessel now owned by MSC that was previously used for prior successful MSAR® demonstrations on a 69MW 2-stroke engine and commence by no later than 31 December 2022, subject to the ongoing availability of the vessel. Each POC Trial is estimated to require 1,000 metric tonnes (mt) of fuel to confirm engine performance on the vessel.

Subject to positive results from the POC Trials, the fuels will undergo subsequent operational trials to provide commercial operating experience with a view to obtaining Letters of No Objection (LONOs) from the engine manufacturer (Trials) after proving operational viability of bioMSAR™ and MSAR® at both an interim (midway) and final stage (after circa 4,000 operating hours).

It is estimated that approximately 25,000MT of fuel will be required for each of the Trials, with fuel produced by Quadrise and purchased by MSC. In conjunction with the Trials, MSC and Quadrise will jointly continue discussions with other marine engine suppliers to investigate testing bioMSAR™ and MSAR® on their engines.

In parallel, subject to the successful progression of the Trial to the Interim LONO stage, Quadrise and MSC intend to negotiate a collaborative commercial agreement (or agreements) to supply bioMSAR™ and/or MSAR® to be used by MSC. The Parties will also investigate opportunities to test the Quadrise Blend-on-Board solution on a suitable MSC vessel.

Jason Miles, CEO of QFI, said: “This is an important milestone for the Company as we progress our projects and deepen our relationships with leading energy suppliers and users to reduce energy consumption, costs and emissions.”

“Quadrise is delighted to have signed this new agreement with MSC Shipmanagement, the biggest in-house ship management company globally responsible for the largest container ship fleet in the world. We look forward to working with MSC and project stakeholders to demonstrate the commercial viability and environmental benefits of our fuels to the wider seaborne fleet.”

“MSC sets the standard for energy efficiency and biofuel use in the marine sector, and we believe that our bioMSAR™ and MSAR® technology offers an excellent solution to accelerate their decarbonisation and emissions reduction efforts.”

Prabhat Jha, Group MD & CEO of MSC Shipmanagement Ltd, said: “MSC Shipmanagement is delighted to be working with the Quadrise team under this new agreement, as together we have an important enabling role in the marine energy transition towards a net zero carbon future and reducing our own vessel emissions.”

“MSC has one of the youngest fleets among the world’s leading shipping lines, and we seek to continually improve energy efficiency by collaborating with suppliers such as Quadrise to promote the wider adoption of low and zero-carbon fuels.”

“We each have an important role to play to accelerate the decarbonisation of the shipping and logistics industry and  we look forward to progressing commercial testing of bioMSAR™ and MSAR® technology on our fleet together with Quadrise.”

Bunker One expanding operations to the Caribbean

As of 1 December 2018 the company will be fully operational in Jamaican ports, off Jamaica and Trinidad.