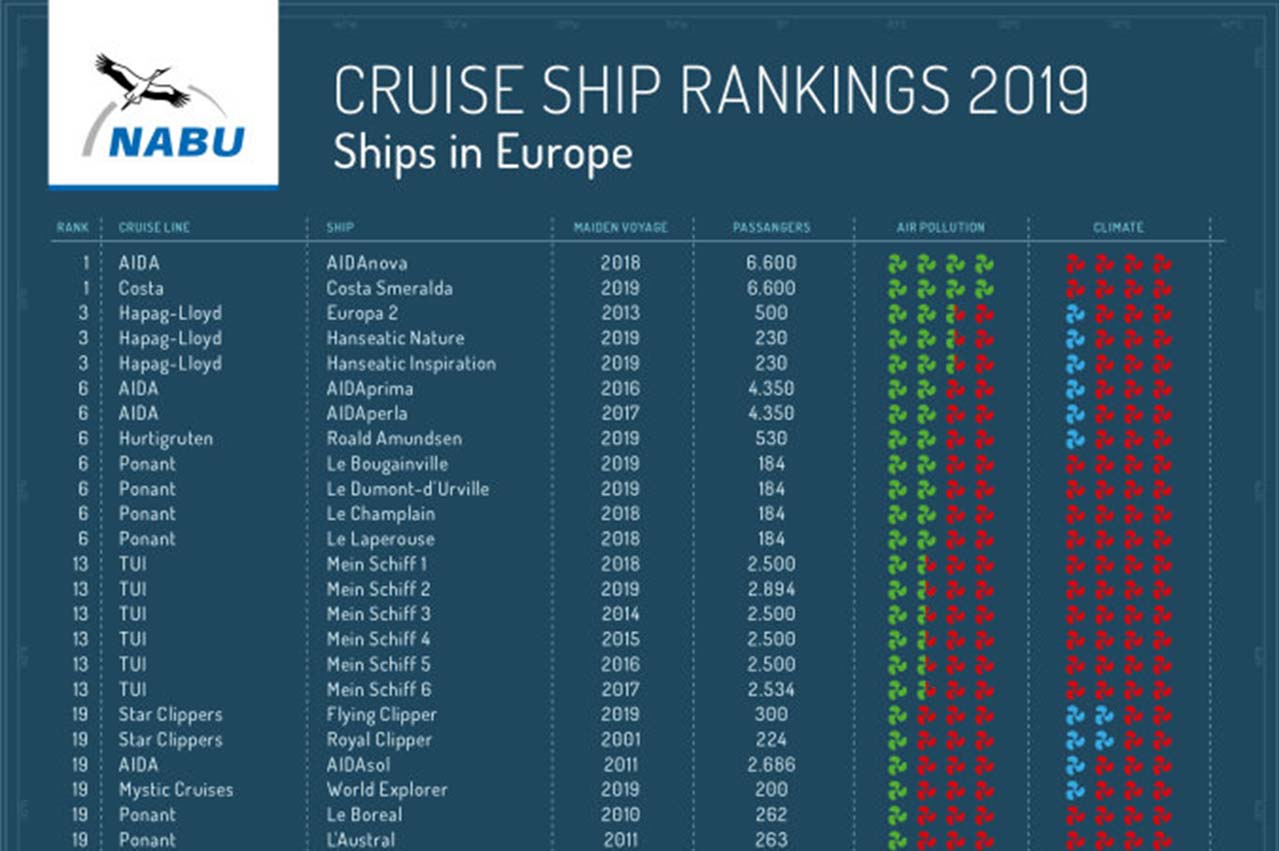 The findings of this year’s evaluation demonstrate that only a small proportion of fleets is becoming cleaner, while the industry by large continues to rely on heavy fuels without employ exhaust cleaning technology.

“The cruise ship industry’s failure to embrace climate protection is a slap in the face of our youth. Nobody can pretend to be unaware of today’s climate crisis – it is our joint responsibility to act now,” commented NABU CEO Leif Miller.

“Nevertheless, suppliers flood the market with more giant vessels every year, all being operated by fossil fuels. That’s not keeping up with the times and it is irresponsible, too. Cruise ships can only have a future if they use zero-emission technologies.”

“It’s a scandal that we still see ships today which are built with a standard that dates back to decades ago,” said Malte Siegert, head of climate policy at NABU Hamburg.

“Technologies for new constructions as well as retrofitting are widely available. It is crucial to make these new standards mandatory and to have them installed in all ships as soon as possible.”

Recently more and more cruise ships started to include LNG engines, but LNG is still entirely a fossil fuel and its extraction process is in part heavily damaging to the environment, according to NABU.

In addition, one has to take into account the so-called methane slip, by which the highly potent greenhouse gas methane is emitted into the atmosphere.

While gas powered engines hence do emit less air pollutants in comparison to marine diesel and heavy fuels, they are not performing better in terms of the fleet’s climate footprint.

In the category of air pollutants German ship owner AIDA comes first with its newest model AIDAnova while AIDA’s Italian parent group Costa Crociere is on a par with its LNG operated Costa Smeralda.

The third place is awarded to three ships of shipping company Hapag-Lloyd: “Europa 2”, winner of the year 2013, as well as the new expedition cruise ships “Hanseatic Nature”, and “Hanseatic Inspiration”.

Far behind the industry’s giants MSC and Royal Carribean take the last place at all times. German company TUI Cruises has downgraded to a 13th place.

The full overview of cruise ships ranking for the European market can be obtained here.

Itochu and Vopak earlier in June 2020 entered into an MOU to study the feasibility of developing an ammonia bunkering infrastructure at Singapore port.

IMO and the United Nations Environment Programme for the Coordination of Humanitarian Affairs (OCHA) have jointly deployed an oil spill response expert, it said.