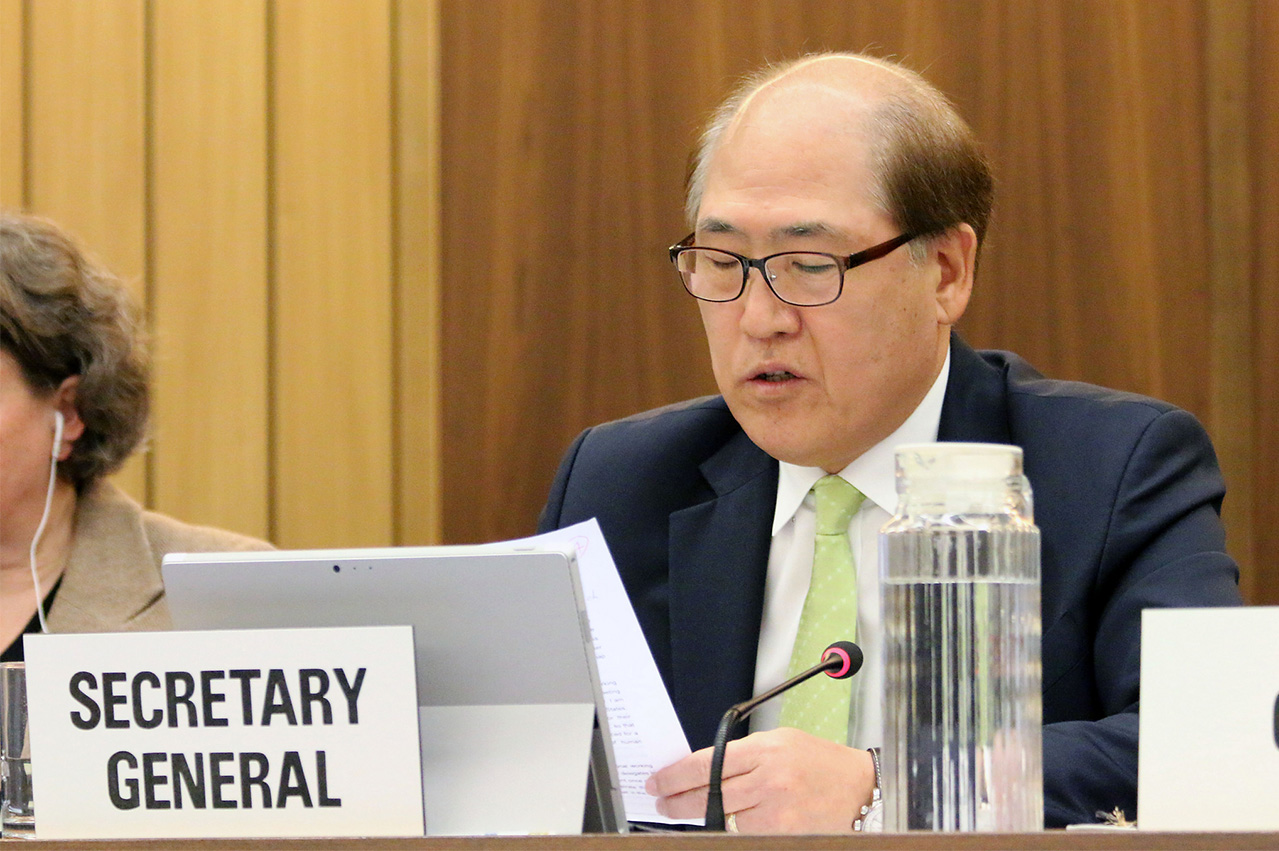 The following is a statement by Kitack Lim, Secretary-General at International Maritime Organization to sum up the Marine Environment Protection Committee (MEPC), 72nd session, 9-13 April 2018:

This was another exceptionally busy as well as momentous session of the Committee and your hard work, in particular the decisions made over these past five days, should, therefore, be recognized with immense appreciation.

The adoption of the Initial IMO Strategy is another successful illustration of the renowned IMO spirit of cooperation and will allow future IMO work on Climate change to be rooted in a solid basis.

This important achievement enables the Organization to continue to present itself to the outside world as the competent and uniquely qualified body to be entrusted with the maters on reduction of GHG emissions from international shipping.

I would like to take this opportunity to express my deepest appreciation to all Member States, in particular, Developing Countries, LDC and SIDS for their devotion, passion and patience throughout the whole process. My thanks also goes to IGOs, NGOs and industries for their constructive contribution.

Special thanks and congratulations are due to Mr. Sveinung Oftedal of Norway for the immense work undertaken since last year as chair of the working group on reduction of GHG emissions from ships.

Once again, I encourage you to continue your work through newly adopted Initial GHG Strategy which is designed as a platform for future actions. I am confident in relying on your ability to relentlessly continue your efforts and develop further actions that will soon contribute to reducing GHG emissions from ships.

That spirit of unity and consensus that you managed to achieve in this room has particular meaning this week, as the world is about to celebrate the Earth Day next week on 22nd April. The achievements of your Committee also resonate well with the spirit of cooperation that IMO enjoyed over its 70 years of history – something we will be celebrating throughout this year.

I also wish to highlight the Committee’s other important achievements on:

I wish to thank you all and, in particular, the Committee’s new Chair and new Vice-Chair, Mr. Hideaki Saito of Japan and Mr Harry Conway of Liberia. Each has performed splendidly and to the highest standards expected from the Organization.

To you, Harry, I also wish to express my sincere thanks for your valuable input.

I wish to pay a special tribute to all the staff of the Marine Environment Division for their tremendous input in the preparation of this session and throughout this week under the leadership of Mr. Stefan Micallef. As are the commitment and collaboration of all the staff of the Conference Division, under the leadership of Mr. Hiroyuki Yamada, and including, in particular, colleagues in the Documents and Conference Sections and the devoted translators. I also wish to say a special thank you to the interpreters, whose skills in facilitating our communication never cease to amaze us.

This is also an opportune moment to thank those delegates who are leaving us for their contributions to the work of the Committee and of the Organization and to wish them all the best for the future.

This session is the last MEPC for Peter Hinchliffe, the Secretary-General of ICS. Peter has been one of the strongest proponent of IMO’s role as the global regulatory body for shipping. Of course, on occasion he has criticized some of our collective outputs but Peter’s inputs have always been constructive and honest. Peter has been a champion of shipping ever since he joined ICS in 2001 and he is leaving behind some big shoes to fill. Happy retirement Peter and thank you for all the support for the work of the Organization.

I wish to thank Mr. Chris Wiley of Canada who is stepping down from the chair of the Ballast Water Review and Working Groups after this session. Having chaired these groups at PPR and MEPC, as well as III, for 10 years, Chris has played an instrumental role in supporting the Organization’s efforts in the implementation of the Ballast Water Management Convention. His ability to steer these usually very heavily loaded groups in the most effective way contributed hugely to the impressive outcomes achieved over numerous sessions while dealing with many complex topics often under very tight timing constraints. We are grateful that Chris held this role until the Convention came into force. I wish him well in future endeavours.

I also extend my thanks to Ari Gudmundsson of the FAO who will be retiring in the summer. Ari has actively participated in the work of IMO, initially on behalf of Iceland and since 2004 representing FAO. Ari served as Vice-Chair of the SLF Sub-Committee from 2002 to 2004 and he has contributed immensely to the joint work of FAO and IMO relating to the Global Record, fishing vessel safety, MARPOL Annex V and IUU fishing. I wish Ari all the best for the future.

I would, in particular, like to say a few words about Mr. Stefan Micallef, Director of the Marine Environment Division – as this will be his last MEPC in his official capacity as Secretary to this Committee.

Stefan – you have done a more than truly magnificent job in serving IMO and the United Nations family in general. It never ceases to amaze me and I am sure everyone in the Secretariat and this house to observe you at work – undeterred by complex technical issues or by diverging views and opinions, doing whatever it takes to support the vision of IMO, achieving all this with a passion, commitment and good humour. Your long UN experience, highest level of diplomatic skills and profound technical and scientific knowledge on issues related to marine environment, laid a firm foundation for your ability to handle issues that require a real sense of duty, responsibility and leadership.

Stefan – it has been suggested that perhaps we should apologize to your family and friends because IMO hijacked so much of your time; evenings, weekends and vacations. But there are others who say that you have yourself to blame for your devotion to the United Nations family, which, after all, you joined entirely voluntarily 28 years ago.

According to a reliable source, your life changed for good when you decided to leave your beloved Malta to take up your doctoral studies in marine toxicology from the University of Wales in UK. You then started your career with the UN in 1990 as Programme officer at the Regional Marine Pollution Emergency Response Centre for the Mediterranean Sea (REMPEC) based in Malta prior to moving to UNEP’s Division of Environmental Policy Implementation in Nairobi, Kenya, as Chief of the Disaster Management Branch. IMO was fortunate to have you back in 2004 when you re-joined IMO as a Senior Technical Officer within MED responsible for all matters related to the carriage of Chemical in bulk.

Delegates, may ask – what are Stefan’s main characteristics? Professionalism of the highest standard – hard working –solid technical knowledge – and above all a compassionate human being– a professional, who is a great credit to IMO – a proud and distinguished son of Malta. I must add – a great water polo and rugby player in his youth who even represented Malta at national level before taking up golf.

Stefan – since joining the Marine Environment Division in 2004, first as a Senior Technical Officer, then as Deputy Director and finally as Director and Assistant Secretary General, you have played a pivotal role in keeping the Secretariat on course in ever-expanding and more complex fields of regulation, such as air pollution and greenhouse gas emissions, alien invasive species, ship recycling. You also gave a strong leadership as Administrative Secretary of the GESAMP.

You have achieved all this with great success but, above all, you have been a most loyal and staunch supporter of everything IMO and the UN stands for. For that we owe you enormous gratitude and deep and lasting respect. You have also been a wonderful friend, and for that I wish to thank you personally.

I am aware that, in the past, you had written books on environment for children and perhaps you would brush up your writing skills to contribute more. Or alternatively, knowing your passion for being closer to the sea, if you also decide to open that seaside bar in Malta to serve some Maltese delicacies and wine, please don’t forget to let us know!

Ladies and gentlemen, please join me to applaud Stefan on his achievements, and in wishing him all the very best for the future.

It now remains for me to wish you all a nice weekend – and to those who have to travel home a safe journey.

An important stop block has been removed paving the way for advancement of individual proposals, notes spokesman.

BIMCO: What does the ‘IMO 2020’ regulation really say?

Guide looks at five highly relevant topics, how to comply and how the regulation will be enforced.