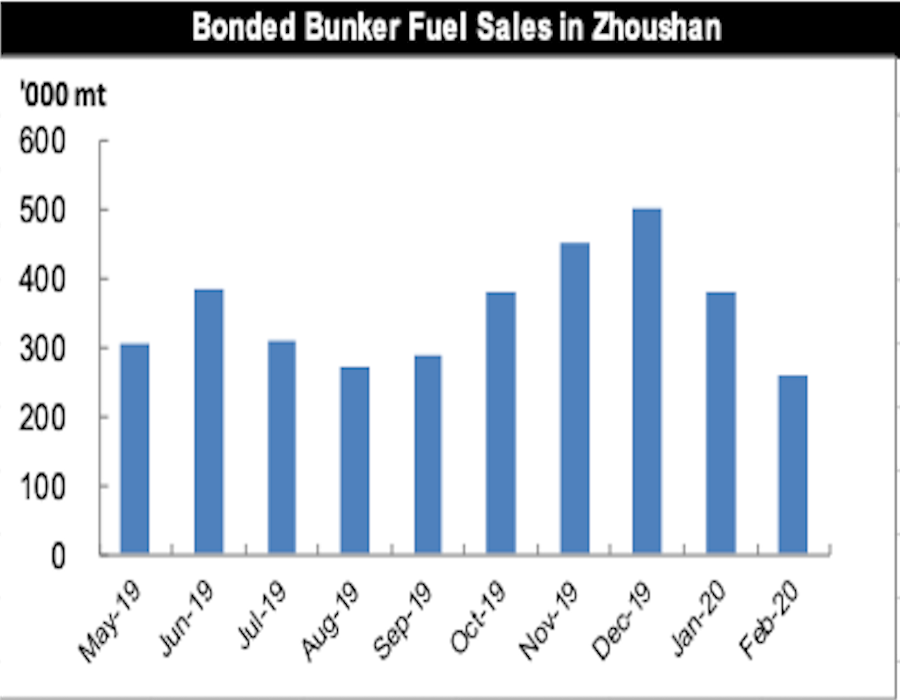 China’s bonded bunker fuel sales climbed to 1,604,700 mt in January-February, up by 18.08% from the same period last year, according to GAC data, but dropped significantly compared to previous months. Bonded bunker fuel market retreated In January as January was the off-peak season for the shipping market, and most traders rest In the Spring Festival holidays In January. In February, with the outbreak of COVID-19 in China, the number of international ships at Chinese ports slumped, and port operation was affected by strict inspections against the virus. Specifically, bonded bunker fuel sales were 633,800 mt for Chimbusco, 562,100 mt for Sinopec, 84,600 mt for China ChangJiang Bunker (Sinopec), 81,700 mt for SinoBunker and 242,500 mt for new enterprises in the China (Zhejiang) Pilot Free Trade Zone.

Besides, with epic dives of International crude prices, bunker fuel prices slumped by CNY1 ,100/mt (USD 156) in March. Trades were thin as end-users showed no purchasing interests. The demand for domestic-trade heavy bunker fuel was about 200,000 mt in March, up by 20,000 mt or 11.1% from the previous month. The demand for light bunker fuel was 70,000 mt in March, up by 5,000 mt from February as fishermen made small purchases based on their needs

China’s bonded bunker fuel imports reached 2,531,300 mt in January-February, a rise of 8.73% from the same period last year, GAC data showed. Bonded bunker fuel imports surged in January on the strong demand for low-sulphur fuel after IMO became effective. However, imports dropped in February as Chinese ports and the shipping market were hit by the outbreak of COVID-19.

Chinese blending producers supplied a total of around 230,000 mt of heavy bunker fuel in March, a rise of 30,000 mt or 15% month on month, JLC data showed. Domestic trade bunker fuel supply recovered amid operation resumption and increasing purchases of blendstock amid dives of blendstock prices, but the recovery was limited as some blended producers halted operations when bunker fuel prices dropped to the lowest level. Light bunker fuel supply was about 95,000 mt, up by 5,000 mt from the previous month.

Creditors of Raffles Bunkering are required on or before 16 October 2021 to send in their names and address with particulars (if any) to the Liquidator.