China’s bonded bunker fuel sales fell further in November, as downstream consumption kept shrinking amid the virus and related restrictions, despite a drop in domestic bunker fuel prices. The sales at most Chinese ports except for Ningbo Zhoushan port were stable to lower month on month.

The country sold about 1.54 million mt of bonded bunker fuel in November, a monthly dip of 3.46%, JLC’s data shows. Specifically, the sales by Chimbusco went up to 570,000 mt, while those by Sinopec Zhoushan, SinoBunker and China ChangJiang Bunker (Sinopec) slid to 580,000 mt, 60,000 mt and 45,000 mt respectively. In addition, suppliers with local licenses sold 280,000 mt of bonded bunker fuel in the month.

China’s bonded bunker fuel exports plunged to a 31-month low in October, as demand in the shipping market was dampened by the epidemic and China lost price advantages of bonded low-sulfur fuel oil (LSFO). China recorded roughly 1.23 million mt of bonded bunker fuel exports in October 2022, a collapse of 38.60%month on month and 20.25% year on year, setting a new low since March 2020, according to the data from the GeneralAdministration of Customs of PRC (GACC). Among the exports were about 1.17 million mt of heavy bunker fuel and 65,600 mt of light marine gas oil (MGO), accounting for 94.68% and 5.32% of the total respectively.

China’s bonded bunker fuel exports saw a dramatic slump as bunker fuel consumption in the shipping market was hit hard by the lingering negative impact of the virus. Meanwhile, some ship owners reduced purchases as bunker fuel prices at certain ports rose on relatively tight supply, adding to the downward pressure on the exports.

On the other hand, China’s LSFO output rallied in the month, with some refiners moderately boosting LSFO production on the strength of a new batch of export quotas. The country’s LSFO output (of Chinese refiners with export quotas) totaled about 1.33 million mt in October, gaining 6.23% month on month, JLC’s data shows. China tallied about 503,900 mt of bonded bunker fuel imports in October, growing by 17.76%month on month and nearly doubling year on year, according to data from the General Administration of Customs of PRC (GACC).

The UAE still led all suppliers by exporting 149,500 mt of bonded bunker fuel to China, despite a month-on-month slump of 46.22%, accounting for 29% of the total. Meanwhile, the imports fromSouth Korea and Russia rose to 111,600 mt and 105,300 mt, making up 22% and 21% respectively. Malaysia remained in fourth with imports from the country amounting to 69,600 mt and occupying 14%. There were also some imports coming from Singapore and Japan, which accounted for 8% and 6% respectively. China imported an accumulation of roughly 4.07 million mt of bonded bunker fuel in the first ten months of 2022, a tremendous plunge of 42.39% year on year, GACC data shows.

The plunge was mainly attributed to larger LSFO production. The country produced a total of 12.61 million mt of LSFO in January-October 2022, a steep jump of 38.96% from the corresponding months in 2021, JLC’s data shows. China has been making great efforts to ramp up LSFO production over the recent years, aiming to reduce its reliance on imported low-sulfur resources. 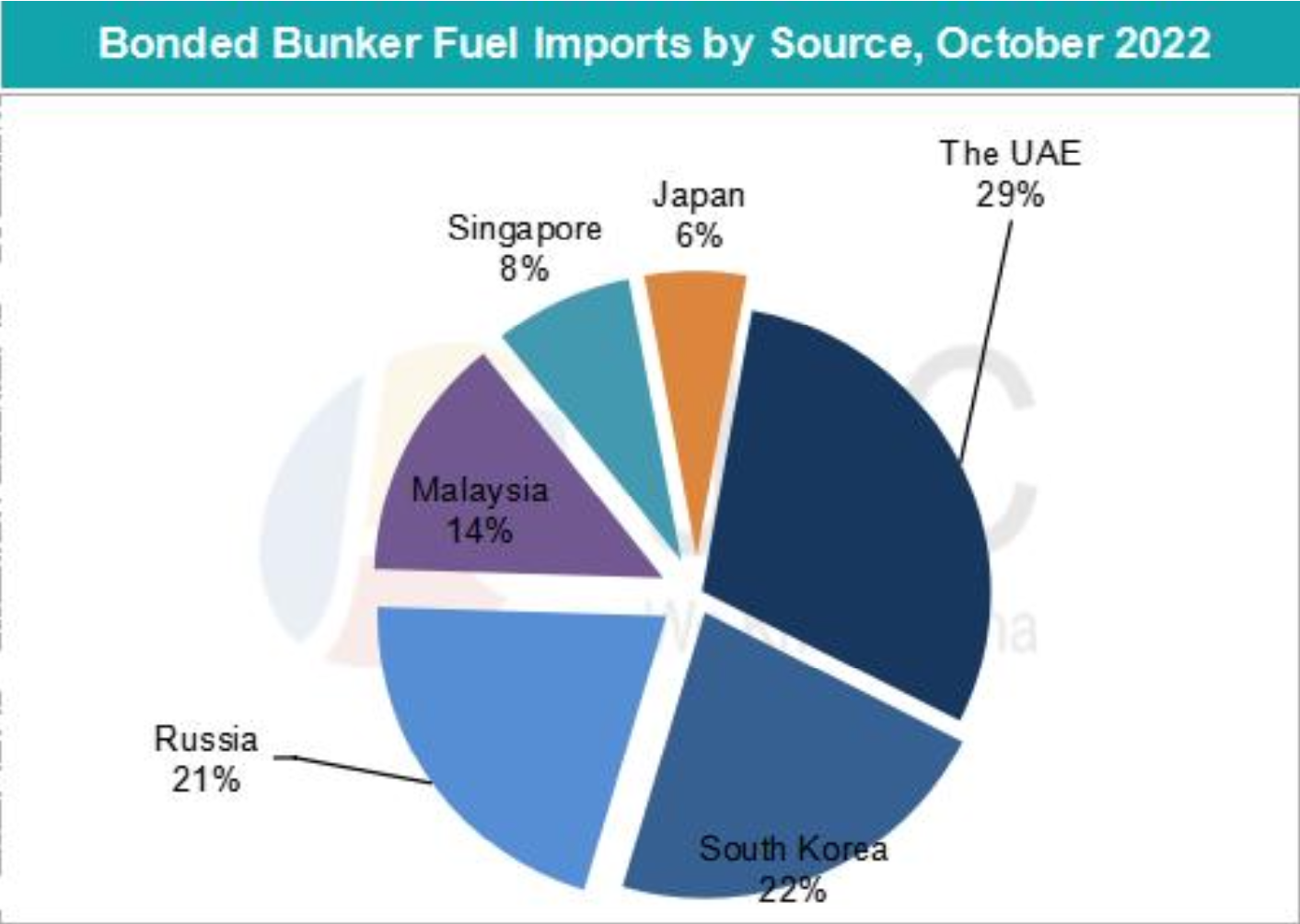 Chinese blenders supplied 390,000 mt of heavy bunker fuel in November, a cutback of 30,000 mt or 7.14%from the previous month, JLC’s data indicates. Domestic blended heavy bunker fuel supply tightened in the month due to a further decrease in blendstock supply. The transportation of light coal tar and coal-based diesel was constrained by the virus-related restrictions coupled with bad weather in northern regions. Meanwhile, cargo delivery in Shandong was also hampered by the epidemic, adding to the downward pressure on domestic supply. As for blended light bunker fuel, the supply of domestic marine gas oil (MGO) fell by 20,000 mt or 11.76% to 150,000 mt in the month, the data shows. Downstream buyers became more cautious about purchases with the domestic diesel market ushering in a seasonal off-season. 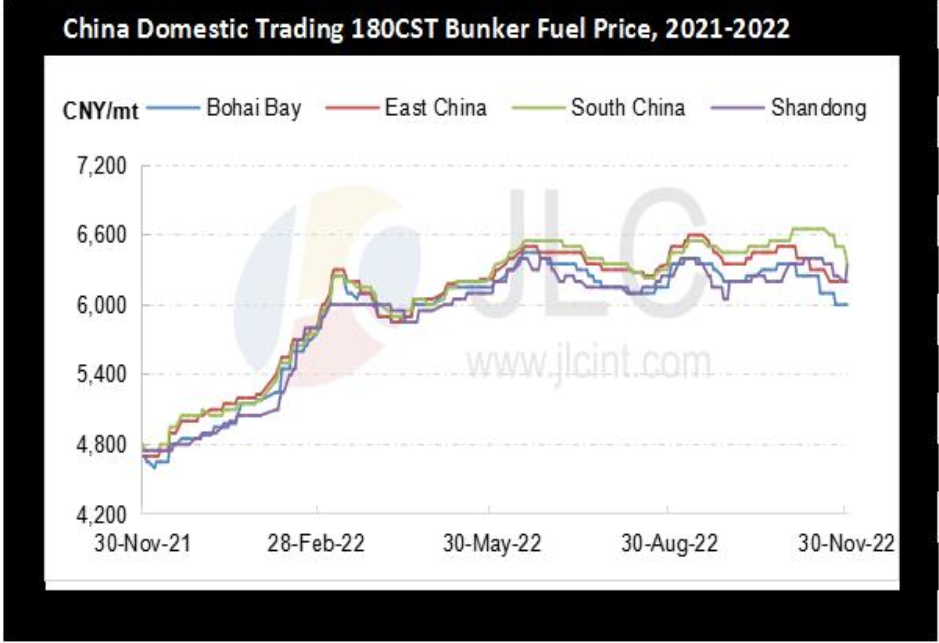 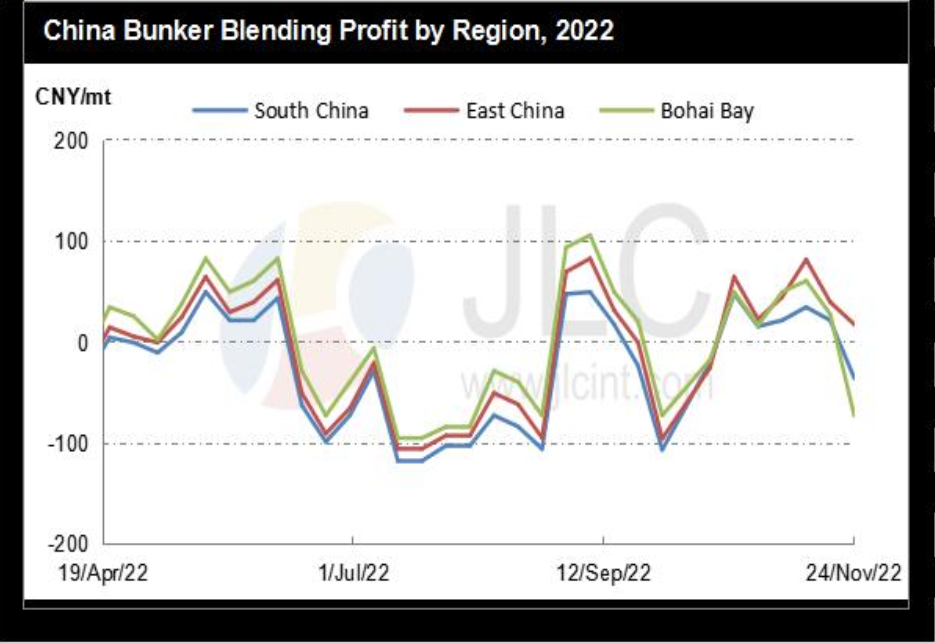 Collaboration will explore the use of low carbon bunker fuels and develop green technologies to accelerate maritime decarbonisation as well as promoting digitalisation.

Bunker tanker Lizrix able to segregate up to five grades of marine fuels for deliveries.