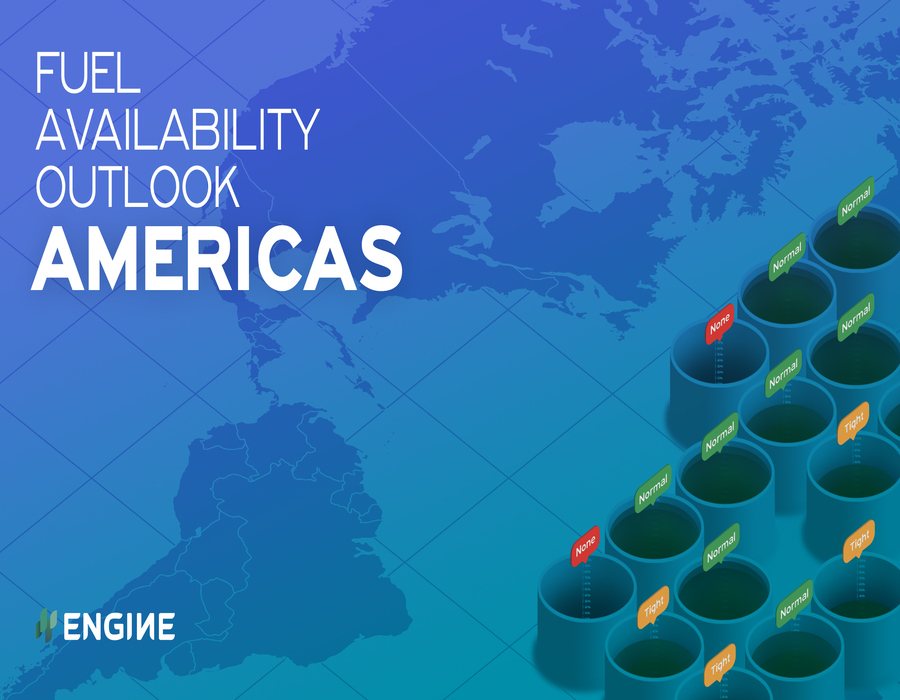 All grades remain tight for prompt delivery dates in the Houston area and bunker locations off the Gulf Coast. The recent fog disruptions in Houston Ship Channel led to a significant rise in vessel congestion on either side of the channel. As a result, some suppliers have held back prompt offers as they work to clear backlogs from some of these delayed vessels that were set to arrive for bunkers, a source says.

There is a high to moderate risk of fog and reduced visibility from next Monday, which could halt vessel traffic again through the channel leading into Houston and other nearby ports. Product loadings at fuel terminals have been pushed back due to recent weather disruptions, adding more pressure to prompt supply in the Houston area, a source says.

VLSFO and LSMGO availability remains tight in Bolivar Roads. One supplier requires seven days of lead time, while another has a shorter lead time of four days.

Prompt supply remains tight in the Galveston Offshore Lightering Area (GOLA) due to ongoing rough weather conditions. Some suppliers are trying to deliver stems in GOLA as and when the weather allows, but have mostly halted deliveries otherwise, sources say.

While others can deliver stems from next Wednesday onwards if the weather permits, a source says.

VLSFO and LSMGO availability is normal in the East Coast port of New York. Recommended lead times are about 3-5 days.

All grades remain tight for prompt dates in the West Coast ports of Long Beach and Los Angeles as in recent weeks. A longer lead time of at least 10-12 days is generally recommended for VLSFO and LSMGO. Meanwhile, HSFO lead times are typically even longer.

Minerva Bunkering is closing its physical bunker supply operations in Los Angeles and Long Beach. This could cap delivery capacity in these ports. The company used to supply HSFO, LSMGO and VLSFO grades in these ports with four barges.

Bunker availability remains steady for all fuel grades in Mexico’s Manzanillo. Recommended lead times for HSFO, VLSFO and LSMGO are about five days out, but prompter stems can be accommodated.

All grades remain tight for prompt dates in Panama’s Balboa and Cristobal. Lead times of 5-6 days are generally recommended for VLSFO and LSMGO, down from last week’s 7-9 days.

Available dates for prompt HSFO supply are generally patchier in Balboa and Cristobal, partly due to fewer suppliers offering the grade.

Availability is normal in Colombia’s Cartagena, Santa Marta and Barranquilla. The recommended lead time for VLSFO and LSMGO is about three days.

VLSFO and LSMGO availability is normal in Peru’s Callao. One supplier can deliver stems for prompt dates.

Prompt supply remains tight in Argentina’s Zona Comun anchorage due to rough weather conditions. High wind is forecast throughout this week and has left a short delivery window in Zona Comun, a source says.

The ongoing widespread protest in Brazil has had little to no effect on Petrobras refinery operations or the supply of bunker fuels. Stems are being delivered on schedule and no significant delays have been reported in any of the ports in Brazil.

AET will select a suitable shipyard for two zero-emission dual-fuel tankers and they are to be delivered to PTT for long-term charters in Q4 2025 and Q1 2026 respectively, says AET.

‘Low-carbon fuel technology will need to mature by the end of this decade, as we are only one generation of vessels away from 2050,’ said panellist at Sibcon 2020.

Finecor said it would now be able to expand supply operations at Thessaloniki port as well as other northern and central ports in Greece at more competitive prices.

License will allow Windcat Workboats to bunker “Hydrocat 48”, a vessel used to transport crew to and from offshore windfarms, with hydrogen within the port of IJmuiden.