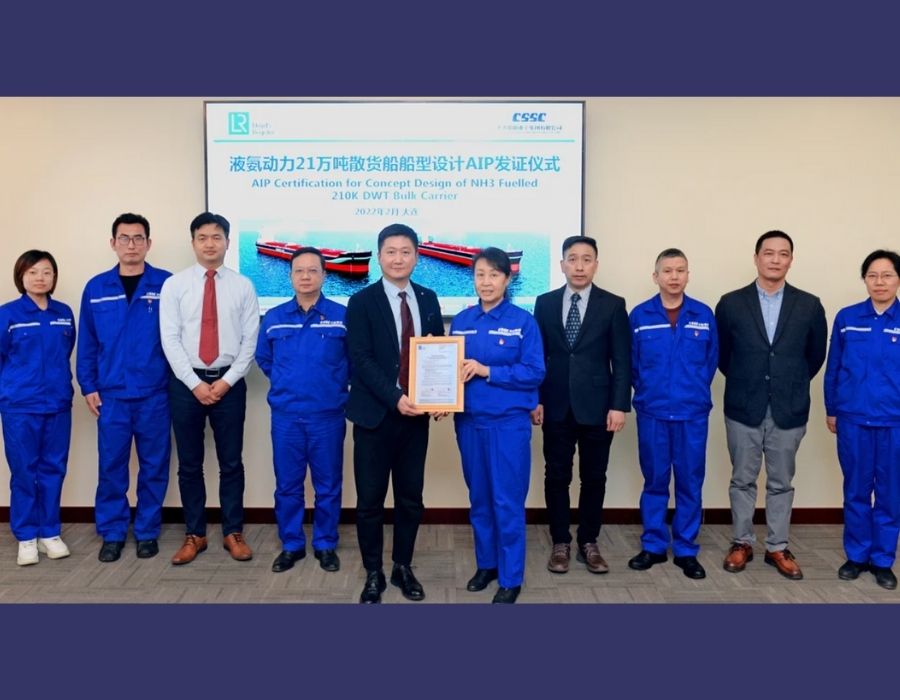 As the classification society selected for the project, LR’s role was to review the suitability and risks of the design, applying its expertise in designs for ships powered by alternative fuels.

Ammonia (NH3) is considered one of the most promising alternative bunker fuels, supporting the marine energy transition away from carbon-based power sources, says LR.

“This is an exciting project, not only for LR who has had many firsts in this area, but for DSIC as this is the first design of its kind and shows its commitment to a transition to zero-carbon fuels,” said Li Tianxiang, Vice President and General Manager of Shanghai Technical Support Office, LR Greater China.

“The award of this AiP is another important step toward the decarbonisation of the maritime industry, showing the feasibility of powering commercial vessels with zero-carbon solutions in the near future. I congratulate everyone involved for their cooperation and hard work.”

“Now we have an AiP for a 210,000 dwt bulk carrier, capable of being powered by ammonia, a leading zero-carbon shipping fuel. It’s further evidence of DSIC working together with its customers for a zero-carbon future.”

BIMCO: The International Maritime Organization in the shadow of COVID-19

Marine fuel related proposed amendments such as procedures for sampling and verification of the sulphur content of fuel oil, EEDI, and IGF Code taking a back seat.

In a separate development, the Aframax tanker Brightoil Lucky has been arrested at Singapore port.

With effect from 9 December, Inter-Pacific will cease to operate as a bunker supplier in the Port of Singapore.

‘If passed, these changes will make Singapore one of the first to implement the MLETR […] an important development for Singapore as a shipping and finance hub,’ said Partner.