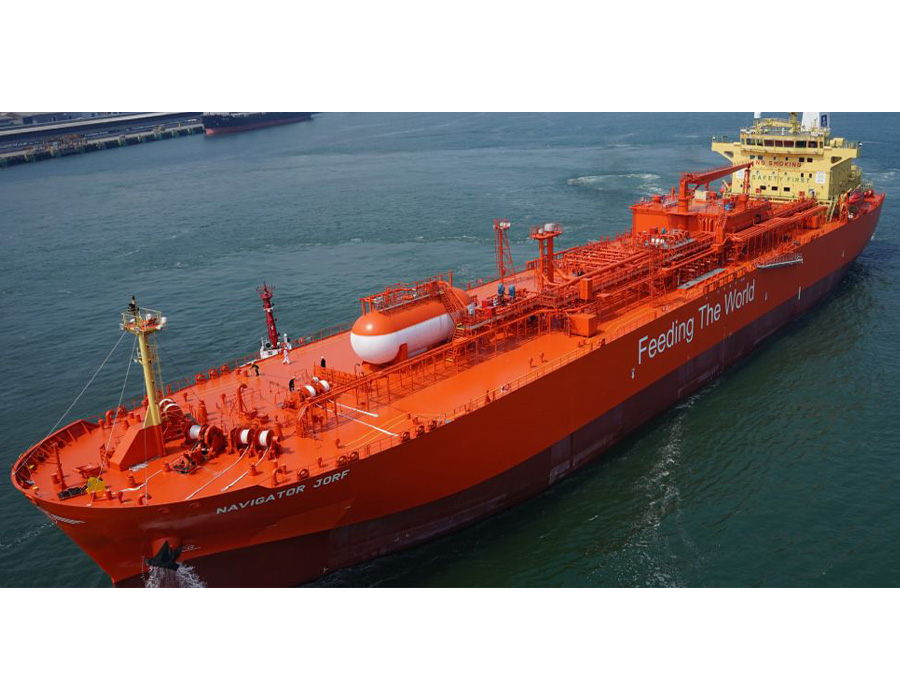 An industry wide consortium, including MAN Energy solutions, Babcock International, and the Norwegian Maritime Authority (NMA), has collaborated with Navigator Gas to achieve the Approval in Principle (AiP) from DNV.

The new gas carrier design has been awarded the AiP based on the special features notation (GF NH3) under DNV’s new rules for the use of ammonia as fuel in gas carriers. DNV, alongside the NMA, reviewed the design and relevant documentation and found no potential showstoppers to its realisation.

“Navigator Gas has been discussing Ammonia as a fuel with our consortium partners since 2018, when this topic was on the fringes of discussions surrounding decarbonisation and the use of alternative fuels,” says Paul Flaherty, Technical Advisor to Navigator Gas.

“Those early discussions on feasibility led to the completion of a comprehensive HAZID in early 2019, which remains as valid today as it was then. This has also been used as the base safety case during our AiP discussions with DNV.

“Since our discussions began, we have witnessed an exponential increase in the number of projects around the globe looking at Hydrogen and Ammonia as carbon free source of energy. We have also been engaging with our customers and business partners to discuss their carbon free shipping requirements for transporting Blue/Green Ammonia to their customers.”

“Obtaining an AiP from DNV for an Ammonia fuelled vessels is the first step in preparing Navigator Gas to meet the future demands of our customers and to reduce our carbon footprint through lower greenhouse gas emissions.

“In the longer term, using Ammonia as fuel is one of Alternative Fuels options we are pursuing, along with CCS, Carbon Offsetting and improved Vessel Optimisation to reduce our carbon footprint and lower greenhouse gas emissions.

“I would like to thank DNV, MAN Energy Solutions, Babcock International and the Norwegian Maritime Authority, for their unwavering support and input during the AiP process,” he ends.

“We are very pleased to be working with Navigator Gas and so many leading companies on this AiP,” says Torgeir Sterri, Senior Vice President, Regional Manager West Europe, DNV Maritime.

“If our industry is going to continue to play a central role in the global economy, we need to be exploring all options that can get us further towards decarbonisation.

“At the same time, we recognise that for our customers, how to tackle the decarbonisation challenge is going to be most challenging and significant decision they are likely to make this decade. This is why we have created class notations and guideline that give them the flexibility to find the path that fits their operations and business.”

“Babcock LGE is enabling the transition towards a cleaner, sustainable future through innovative technologies, and we are delighted to be working with our partners in this significant project.”

“Since large quantities of ammonia are already transported around the world, it is a well-established commodity and using it to power ships would be a natural step.

“In this context, we have already announced that we expect to be make a dual-fuel, two-stroke ammonia engine commercially available for large-scale ocean-going ships by 2024, followed by a retrofit package to make existing maritime vessels capable of running on ammonia by 2025.”

Lars Alvestad, acting Director of Shipping and Navigation, Norwegian Maritime Authority notes:
“We are proud to be a part of this project and it has given us vital input on how to handle the safety concerns when using ammonia as fuel. Ammonia could play an important role in the decarbonisation of shipping and therefore the safety concerns have to be addressed.”

“This project shows that it’s possible to manage some of the challenges within decarbonisation through good cooperation.”

GARD: The EU Emission Trading System - are you ready?

Since the EU ETS has been agreed, vessel owners and charterers that may trade within the EU should ensure they are prepared to comply with its requirements in 2024.