Express 5 has the capacity for 1,610 passengers, space for 450 cars (or 617 lane metres for trucks plus 257 cars) over 2 vehicle decks and an operating service speed of 37 knots. It is powered by an LNG-capable, medium-speed power plant that offers a powerful yet economic and environmentally friendly solution.

The ‘Auto Express 115’ high-speed catamaran ferry is the largest ferry (by volume) constructed by an Austal shipyard and was securely transported onto Austal Philippines’ floating dock by a new, rail-based system called ‘ANTS’, featuring self-drive trollies with variable geometry to suit any hull configuration. 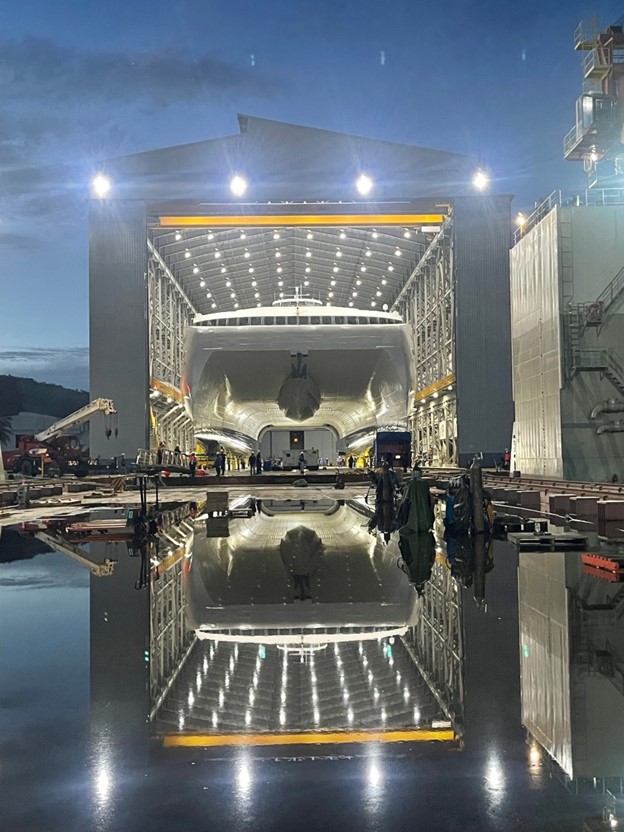 “The launch of Express 5 is a genuine milestone on a number of levels, as the largest ferry ever constructed by an Austal shipyard; and the first to be launched using our proprietary new vessel transport system,” Gregg said.

“The Austal Nautical Transportation System (ANTS) allows us to move any large vessel safely, securely, and efficiently – monohull, catamaran or trimaran – at a fraction of the cost of traditional mobile transporters.”

“Congratulations to the Austal Philippines team, who have not only successfully constructed and launched Express 5 but designed and developed a new vessel transport system to improve efficiency, reduce costs and enhance operations, for the benefit of our customer.”

“Our congratulations also to Molslinjen, whom I know are just as excited as us to see this impressive new ferry in the water, with sea trials commencing soon.”

“I am so proud of the Austal Philippines team who have constructed this impressive new high-speed ferry – the largest ever built by any Austal shipyard – and developed an innovative new transportation system that improves shipbuilding operations and reduces costs,” Mr Murray said.

The sleek looking 115-metre catamaran was designed by the same Austal Australia team who developed the original, signature raked-bow hull for Molslinjen’s Express 4 (delivered in 2019); and includes Austal’s proprietary Motion Control and MARINELINK-Smart systems that help deliver a smoother journey for passengers and crew and a more efficient, better performing, ‘smart’ ship for operators.

Following final fit-out of the vessel alongside at Austal Philippines, Express 5 is scheduled for delivery early in the first quarter of CY2023.

Approximately 160 mt of the 200 mt of spilled oil had been cleared by Wednesday morning.