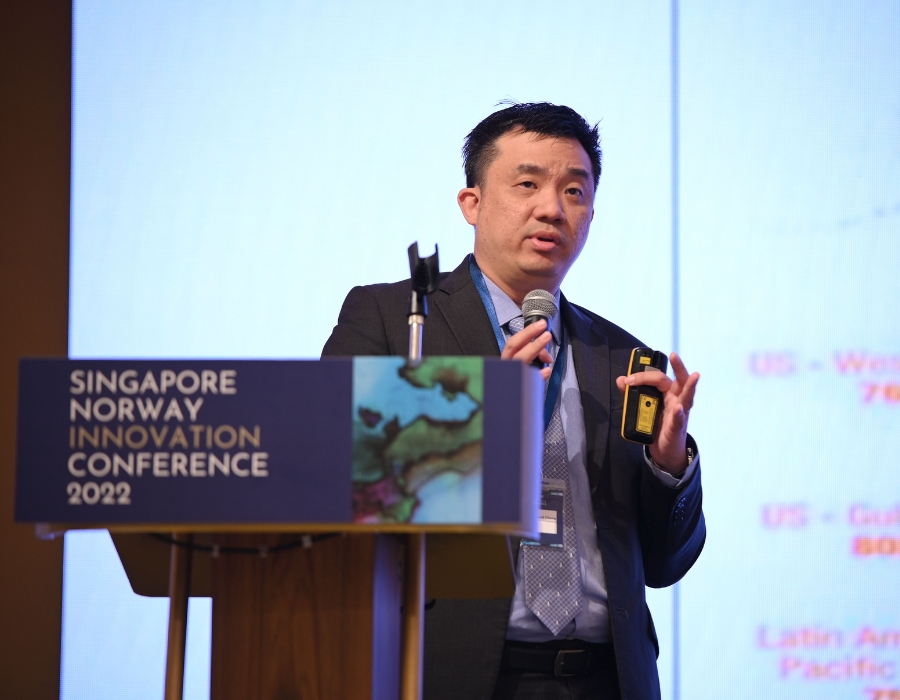 Desmond Chong, Managing Director of Kenoil, said some clients who have traditionally bought fossil fuels are now looking into acquiring future bunker fuels such as methanol, ammonia and hydrogen – aligned with the firm’s decarbonisation efforts.

Following this, Chong shared more on Kenoil’s role in a six-firm consortium for the green e-methanol pilot plant in Singapore during his presentation titled Innovation pipeline showcase: The Development of Future Fuels in the Marine Industry: Methanol.

The study, due for completion by the end of 2022, explored the technical and economic feasibility of establishing a green e-methanol pilot plant with a minimum production capacity of 50,000 tonnes per annum (TPA) – the first of its kind in Southeast Asia.

“Kenoil with its deep expertise in bunkering plays the role as the last-mile delivery solution for methanol bunkering in the consortium. We look into safety aspects of transporting methanol bunker fuel from shore tanks to our vessels for deliveries via ship-to-ship transfers to off-taking vessels,” he said.

When it comes to its readiness in methanol bunkering, Kenoil has prepared its fleet to be ready to keep up with the upcoming green marine fuel types.

“We are prepared to retrofit our fleet to be suitable and compatible with methanol as it is different from conventional fuels as we transport methanol to our bunker barges,” Chong added.

“We also ensure bunkering equipment such as pipelines, bunkering hoses and systems used onboard are compatible with methanol.”

However, it doesn’t end there for this physical bunker supplier once the feasibility study project is done.

Kenoil will be reaching out to other off-takers to make the project a viable one as well as approaching banks to obtain in principle approvals in order to secure financing for other green related projects.

The firm has also been reaching out to regulators such as the Maritime and Port Authority of Singapore (MPA) to engage on methanol bunkering.

“We have also engaged the Methanol Institute and the Singapore Maritime Academy to prepare our crew for training on methanol bunkering and safety handling operations,” said Chong.

Over 25,000t of marine fuels traded on a spot basis for delivery during 4-8 August will be delayed based on estimates of trade volumes reported to Argus.

‘Our key focus continues to be on limiting the impact on the environment,’ says CEO Kristian Mørch.

Non-fully vaccinated crew arriving in Singapore from 28 August, 2359 hours will no longer need to undergo a 7-day Stay Home Notice before departing for Singapore.

Commission aims to make EU's transport system resilient, but the plan lacks a holistic vision on strengthening the role of ports as engines of growth and recovery.