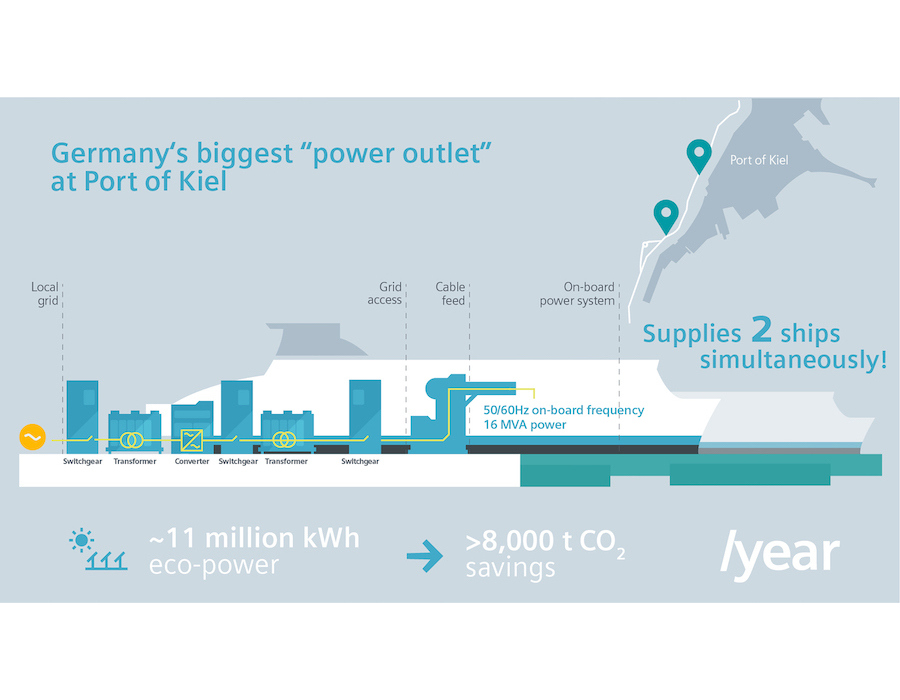 German automation company Siemens on Monday (10 February) said it has been commissioned to build Germany’s largest shore power system to date at the Port of Kiel.

With a power of 16 megavolt amperes (MVA), the Siharbor solution will be able to supply two ships simultaneously with certified eco-power, for the first time. This will reduce annual CO2 emissions by more than 8,000 tons.

The system is expected to go into test operation within the 2020 cruise ship season. Maritime shipping plays a special role in Kiel. The port is the point of departure for cruises and has ferry connections to the Baltic states and Scandinavia. 32 different cruise ships stopped 174 times at Kiel’s port facilities in 2018.

“By building this new shore power system we will actively support the climate objectives of the Schleswig-Holstein state capital,” says Dr. Dirk Claus, managing director with the Port of Kiel.

“In future 60% of the energy demand required by the ships entering Kiel will be covered by climate-friendly shore power as diesel generators will be shut down while they are berthed.”

For an uninterrupted and efficient power supply of the mooring ships the Siemens converter system “Siplink” is used. It features a frequency converter and a software for central controlling of the two berths.

With the system, two medium-voltage networks with different frequencies can be connected.

Siplink synchronizes both networks and takes over the power supply automatically within a few minutes. In addition, it coordinates the energy supply of the ships’ two networks so that power can be supplied to both simultaneously.

Staff from both Total’s China arm and Zhejiang Energy confirmed development with Reuters on Friday.