SS 660 aims to harmonise the quantity measurement methods at oil terminals and bunker tankers for better accuracy and inventory management by covering the upstream process for bunker cargo delivery from the oil terminal to the bunker tanker, said the members.

It includes the quantity measurement requirements during bunker cargo delivery from an oil terminal to a bunker tanker using the Coriolis MFM system.

Through the adoption of digital technology (i.e. use of Coriolis MFM) for terminal operations to improve efficiency, productivity and transparency, shipowners and operators will have better assurance that not only will their vessels receive bunkers correctly, they will also know that the bunkering service is backed up by the integrity of the entire bunker supply chain.

The SS 660 also covers quality requirements, which specify taking a representative fuel sample at the custody transfer point to determine compliance with the agreed fuel specifications to assure the bunker quality delivered to bunker suppliers; it strengthens the application of SS 524 on Specification for quality management for bunker supply chain, which is adopted by bunker suppliers.

TR 80 reflects the requirements and procedures for meter verification using a master MFM to verify and check the stability and performance of a duty meter installed on a bunker tanker or at an oil terminal.

The master MFM is qualified for measuring performance that is three times better than a duty meter and the meter verification process is performed by an independent authorised party for integrity purposes.

When undertaken by an authorised party, meter verification using master mass flow meter is a more efficient and less costly process that independently monitors and checks if a duty meter performance meets the requirements of SS 648 or SS 660 (as the case may be) during its commercial lifespan.

This standard supports the application of the new SS 660 Code of practice for bunker cargo delivery from oil terminal to bunker tanker using mass flow meter and SS 648 Code of practice for bunker mass flow metering, which respectively apply at the start of the bunker supply chain (i.e. bunker loading at terminals) to final delivery of bunker to ships.

“Standards assure the integrity of value chains by harmonising technical terms, measures and industry benchmarks, and provide transparency and stakeholders’ accountability. They have contributed to the digitisation efforts of the bunkering industry and strengthened Singapore’s position as a trusted bunkering hub. Enterprise Singapore and the Singapore Standards Council will continue to work with industry and the MPA to develop standards to support the transformation efforts of the maritime industry,” said Choy Sauw Kook, Director-General (Quality & Excellence), Enterprise Singapore.

“The implementation of TR 48 has enhanced trust in Singapore’s bunkering sector. The pioneering method of bunker measurement has increased the transparency and accuracy of bunker custody transfer, as well as improved the operational efficiency of bunkering at the Port of Singapore. We are confident that the new standards, which support the use of mass flow meters, will boost bunker quantity assurance and reinforce Singapore’s position as a leading bunkering hub of the world,” said Captain Daknashamoorthy Ganasen, MPA’s Senior Director (Operations and Marine Services).

“With the completion of SS 660 and TR 80, and the recent launch of SS 648, the Technical Committee for Bunkering completes a trinity of bunkering standards covering the local bunker supply chain. These two new standards are also envisioned to be new additions to ISO MFM bunkering standards that are led by Singapore, contributing to the betterment of the global bunkering environment for international shipping,” said Seah Khen Hee, Chairman, Technical Committee for Bunkering

“The potential net annual savings derived from the TR 48 case study for the bunkering industry were based on conservative assumptions so the bunkering industry can be confident of achieving even greater outcomes if their internal practices align even closer to the TR 48,” said Simon Neo, Executive Director of SDE International, who is a member of the Advisory Committee for the TR 48 case study in his individual capacity. 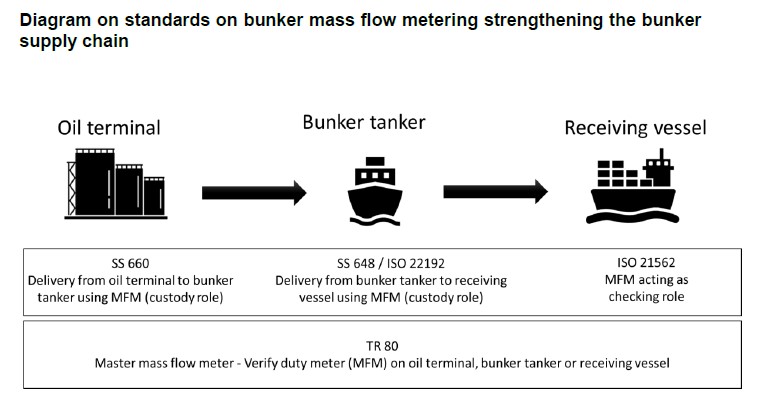 SS 660, TR 80, TR 48 and its revision, SS 648 can be purchased from the Singapore Standards eShop at www.singaporestandardseshop.sg.

A presentation on standards on bunker MFM, including SS 660 and TR 80, as well as a presentation on the economic benefits of TR 48 case study, followed by a panel discussion on ‘Bunkering Standards – Opportunities, Challenges and Prospects’ will be conducted virtually during SIBCON 2020 ‘Powering Fuels of the Future, Driving towards Decarbonisation’ on 7 October 2020. Interested participants can register via www.sibconsingapore.gov.sg.

The Netherlands’ first climate-neutral and zero-emission vessel is scheduled to be launched in August 2018.