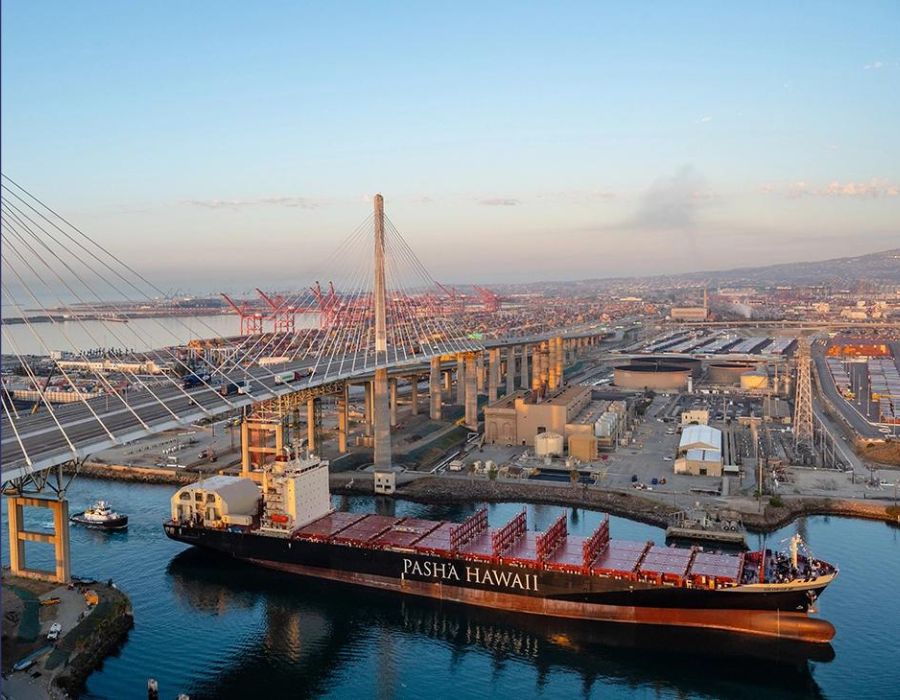 Another LNG Pasha ship on the way – the Janet Marie will be the second of two “Ohana Class” container ships to join Pasha Hawaii’s fleet, in the fourth quarter of 2022, in service between Hawaii and the U.S. mainland.

“Reducing ship emissions will have a significant and positive impact on the region’s air quality,” said Port of Long Beach Executive Director Mario Cordero. “We thank Pasha Hawaii for leading the way in green shipping at the Green Port.”

“This is another positive step toward the widespread adoption of alternative fuels in cargo shipping and using cleaner technology to do business at the Port,” said Harbor Commission President Sharon L. Weissman.

“As we mark our 75th anniversary and welcome George III to Long Beach, we are proud to continue my family’s legacy of innovation and environmental stewardship, while recognising our employees as our extended ‘ohana,’ ” said George Pasha IV, President and CEO, Pasha Hawaii.

“We are also grateful for our partnership with the Port of Long Beach. Being able to fuel MV George III with natural gas at the Port reflects our shared vision of minimising our environmental impact, while setting a new standard for ship building in the U.S.”

The vessel was named after George Pasha IV’s late father, George Pasha III. Operating fully on natural gas, the new vessel surpasses the International Maritime Organization’s 2030 emission standards for ocean vessels, representing the most technologically advanced and environmentally friendly class of vessel to serve Hawaii and one of several that serve Long Beach.

Energy efficiencies are also achieved with a state-of-the-art engine, an optimised hull form, and an underwater propulsion system with a high-efficiency rudder and propeller.

‘We have rapidly grown our business and are on track to become one of the top five operators in Singapore,’ said TFG Marine on Wednesday.

A comprehensive LNG bunkering fuel supply agreement has been signed with Shell to guarantee that all Volkswagen Group voyages will utilise exclusively LNG fuel.

Highlights include adoption of a Sulphur Emission Control Area (SECA) in the Mediterranean Sea and MEPC 79 discussing on establishing a mandatory licensing scheme for bunker suppliers.