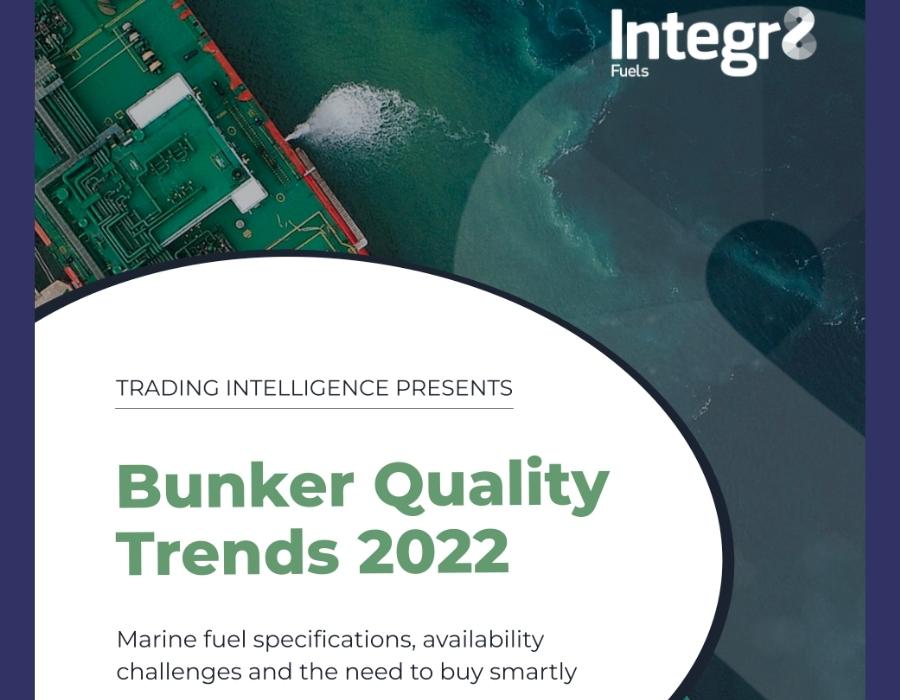 Integr8 Fuels, the bunker trading and brokerage arm of Navig8, on Wednesday (14 September) shared with Manifold Times its first Bunker Quality Trends where it examines and compares likelihood of off specification issues across all commercial grades of bunkers and key ports. The following is a continuation of yesterday’s coverage of the report:

The last 6 months have identified a generally improving picture for both VLSFO and HSFO, however, the back story is that the improvement is from historic lows of the Integr8 Fuels Quality Index in Q1 of 2022, a period that coincided with the start of the war in Ukraine, Russian sanctions and the spike in oil prices as can be seen from Figure 6 below which compares Brent crude against Quality Index. 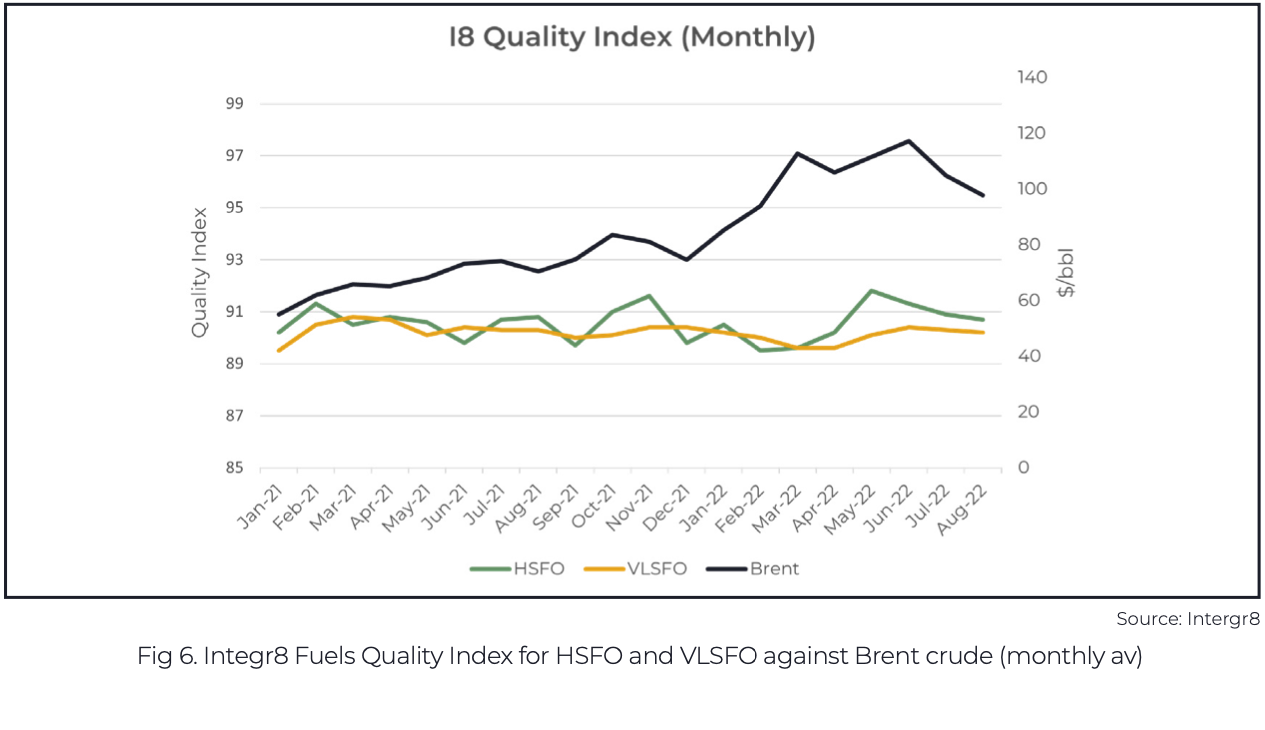 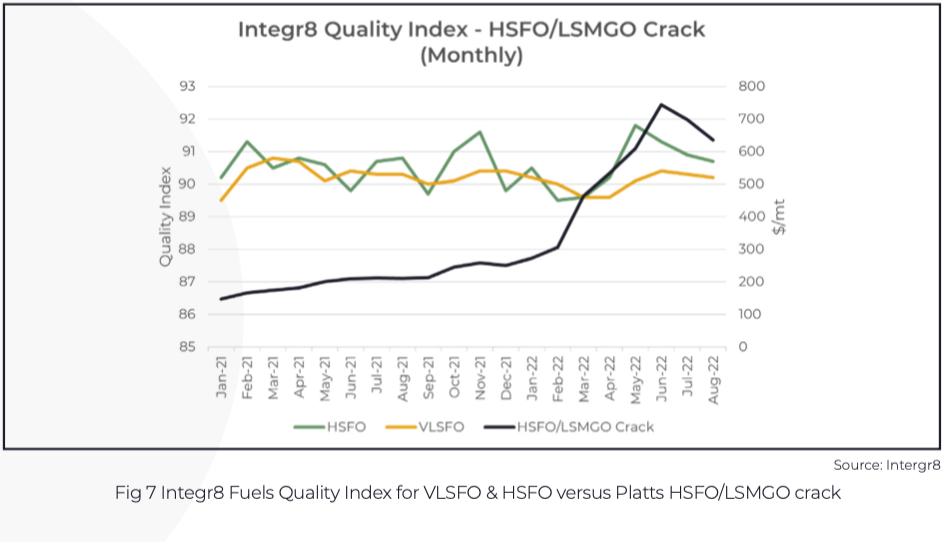 At the time of writing and given the crack has narrowed only slightly and remains more than $600/MT, these challenges show no real sign of abatement so in the short to medium term we do not expect to see significant improvement in fuel quality or compliance.

In the last 180 days, 2.7 % of all VLSFO supplies tested outside of specification (and beyond 95% confidence limits) forlimits) for ISO 8217 table 2 parameters. The data identifies that the risk of Marpol compliance is significantly higher globally than HSFO at 0.8%, however, this does not tell the full story given the elevated risk of non-compliance noted around blending hubs. 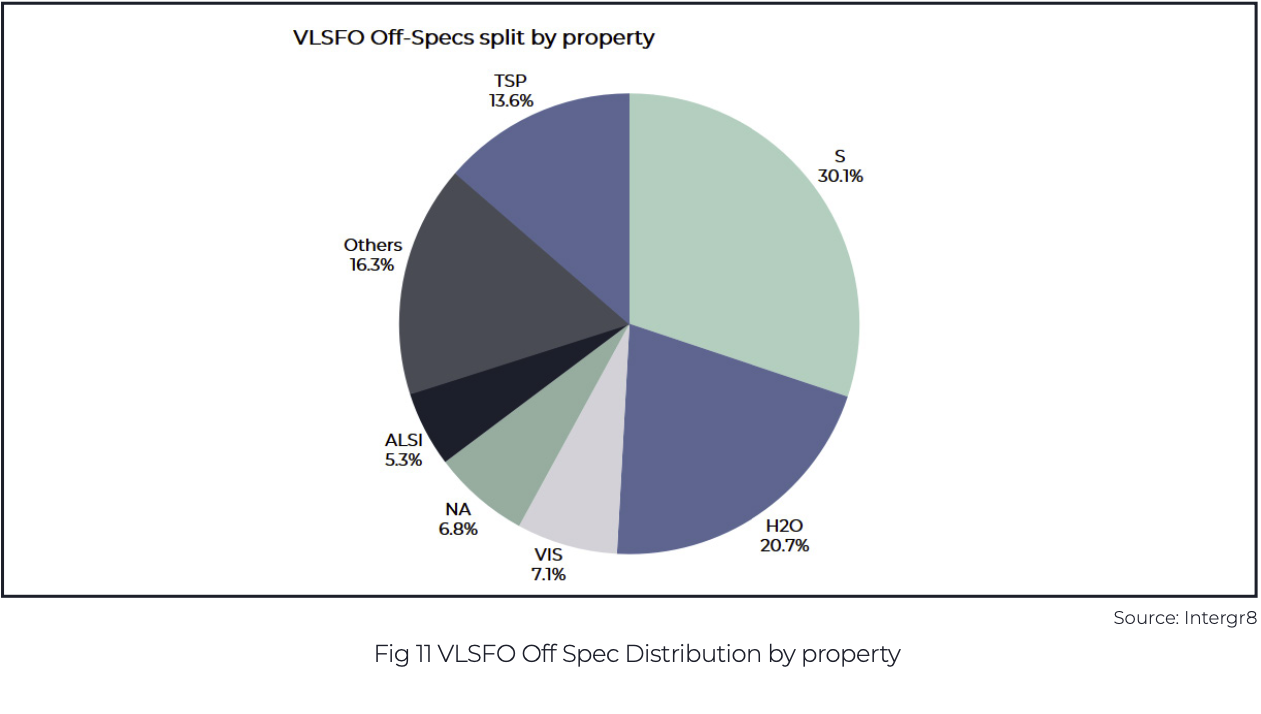 Based on the cross section of off specifications, we can identify the hit-rates of high risk off specification matters such as Aluminium and Silicon and TSP 0.1% and 0.4% or between one and four supplies per thousand. Again, these risks are magnified in blending hubs rather than those areas with either simpler blending models or refined products available. Delving a little deeper, and more concerningly in the last 180 days, approximately two thirds of all off specification VLSFO occurrences are because of Sulphur, Water or TSP Issues with Sulphur alone accounting for almost one third of all off specs (Fig 11) and virtually all compliance matters.

From a global standpoint, VLSFO quality is seen to be good, however, significant regional variances can be noted, none more so than for Belgian and Dutch ports (or ARA) where receivers are at least 10 times more likely to receive a notification of a VLSFO above 0.50% than in Singapore, and more than five times more likely than the rest of the world. (Fig 12) 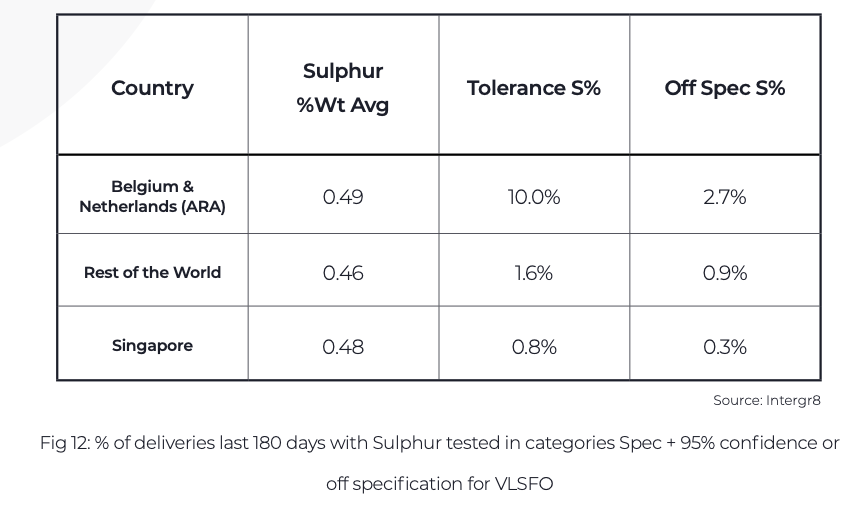 More worryingly, we notice trends within trends in the case of ARA when we drill down to individual supplier performance and, referring to one anonymized example below, we note that in the case of August 22 to date we have strong grounds to believe over 10% of all deliveries were non-compliant and over 30% of all samples potentially noncompliant. To conclude, four out of ten of all VLSFO deliveries may result in non-compliance when considering data related to this anonymous supplier in ARA. (Fig 13, next page)

At the other end of the spectrum, we can identify examples of suppliers with excellent sulphur compliance who, in the last three months do not have a single sample that exceeded 0.50%Wt. (Fig 14) Many theories exist as to why some ARA suppliers have such poor quality data when we consider Sulphur, not least the difficulties of buying ex-wharf and the challenges of the fuel even arriving onto the barge with a Sulphur level of 0.50% or lower, given the reduction in Sulphur give-away from a blending perspective in recent months. It is entirely possible this may be due to cross contamination in jetty lines (with HSFO), but this may also be due to other practices onboard the barge.

Indeed upon investigation of the anonymous poor performing supplier referred to earlier, it was identified that several of their barges were moving storage in-between HSFO and VLSFO with the first delivery post a HSFO movement inevitably testing above 0.5%, no doubt due to the common deck lines (and /or sampling points) onboard the barge. 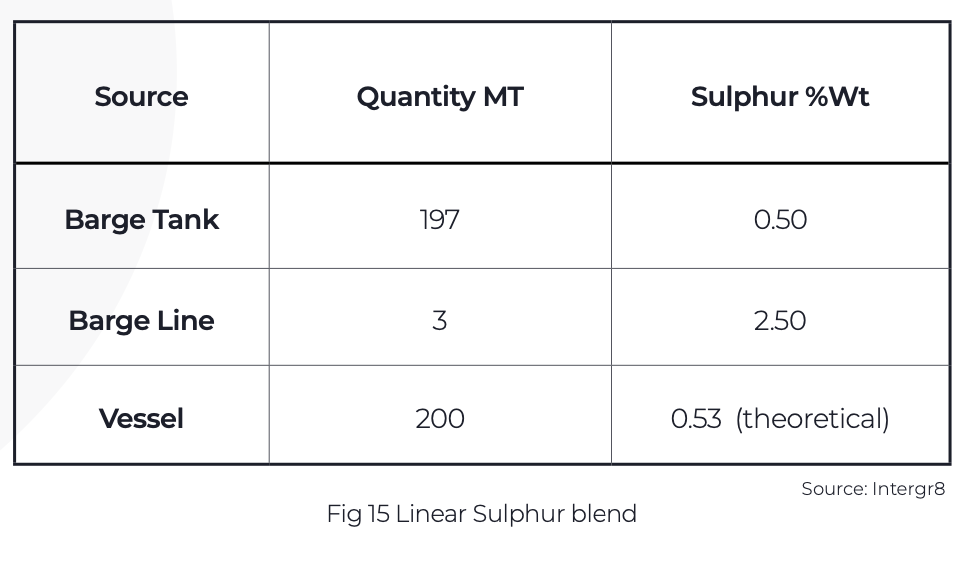 It is also entirely possible that the fuel is compliant in such cases given the possibility of cross contamination within sample points, therefore it is essential to ensure that the sample is representative of the fuel supplied and that there is no cross contamination in the continuous drip sampler. However, best practice remains that unless double valve segregation and separate manifolds are available on board the delivering facility, supplying HSFO and VLSFO from the same barge would be considered a substantial risk to quality if identified.

Expanding on these trends but now considering other parameters, we can also identify similar trends also exist for TSP across ARA when compared to Singapore and other bunkering hubs when considering the likelihood of results testing within tolerance (95% confidence limits 0.11%Wt to 0.15%Wt Incl) or beyond 95% confidence (0.16Wt or higher) in the last 180 days.

The variance across bunker hubs is eye opening. In the case of Fig 16 we can see that we are as much as 26 times more likely to have an off specification incident in ARA compared to Singapore and still almost four times more likely than the second worse hub statistically in Houston.

Interestingly however, the selection of a supplier identified with less risk (based on data available) in ARA would virtually remove this risk entirely and drop the likelihood of a result testing at 0.16%wt or above to the same as Singapore and consequently better than many of the other bunkering hubs worldwide.

First LNG bunkering operation of 158,000 dwt tanker “Greenway” was conducted at Port of Pengerang, Malaysia with support from Peninsula and Petronas Marine.