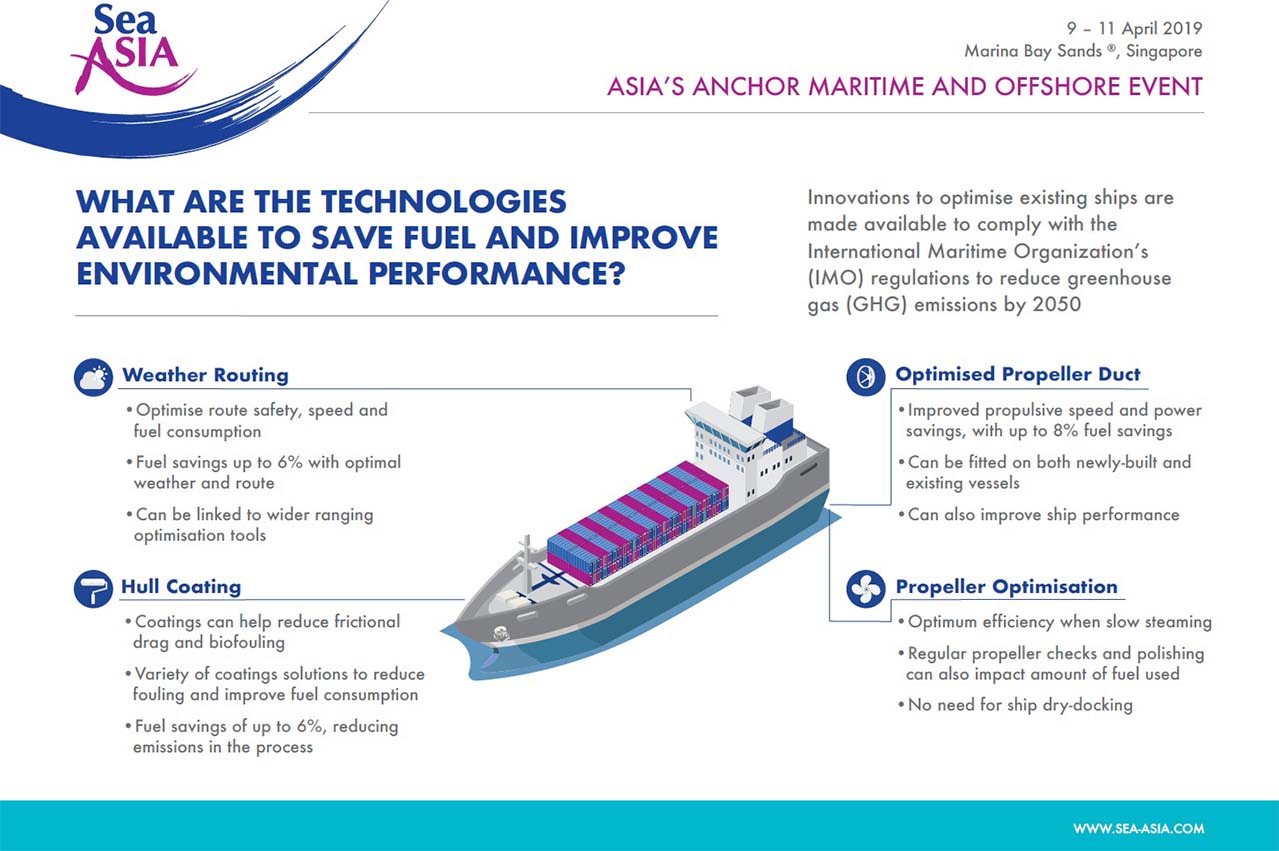 At the same time, the International Maritime Organization (IMO) has also set the 0.5% Global Sulphur Cap regulation for marine fuels from 1 January 2020, as well as to cut CO2 emissions from shipping by 50% by 2040 from the level they were at in 2007. The impending regulations are considered ambitious when the growth in the fleet and world trade is factored into the equation.

While there has been a rush this year by owners to retrofit seawater scrubbers on existing ships, or install them on newly-built vessels (also known as newbuildings), the reality is that come 1 January 2020, the majority of shipowners will comply with the regulation by burning low sulphur fuel oil, which is expected to cost $300 per tonne more in the region than using high sulphur heavy fuel oil.

However, a newbuilding can also be designed with many energy saving devices as integral parts of the vessel. There is a wide variety of technologies and simple maintenance that can be applied to existing vessels to significantly reduce fuel consumption, as well as simultaneously improving environmental performance and lowering operational cost.

Some of these technologies and methods are explained below.

Coatings is one area where shipowners can consider to reduce drag, as well as the build-up of marine organisms on the hull (biofouling), which increases the frictional resistance. The worse the fouling, the more power will be required to keep the ship sailing at the given speed, and this could mean higher fuel consumption, increased production of greenhouse gases and other emissions.

There is a variety of coatings solutions in the market that claim to both significantly reduce fouling and also improve fuel consumption as a result. Hempel's anti-fouling coating, Hempaguard, launched in 2013 and applied to over 1,000 different vessel types is proven to deliver fuel savings of up to 6%, according to the company[1]. At the same time, Subsea Industries claims that its biocide-free coatings can reduce fuel consumption by up to 8%.[2]

The propeller on the vessel is another area where owners can consider to increase efficiency and reduce fuel consumption. To lower operating costs through fuel savings, it is common for ships to sail at less than its maximum speed – a practice known as slow steaming.

For slow steaming to effectively reduce fuel consumption, the propeller needs to be optimised for such speeds for the best results to be produced. Underwater repair specialist Hydrex cited one of its projects on a 229-metre bulker in Bremenhaven as an example, in which a five-bladed propeller was modified to achieve optimum efficiency at lower speeds.[3]

Disciplined maintenance, such as checking the propeller for dents and damage, and regularly polishing it, can also immediately impact the amount of fuel used by the vessel. In a more simple method, adding a cone fin to the propeller helps to reduce energy loss in the slipstream with up to 5% in fuel savings.[4]

Fitting a propeller duct, which consists of two strong fixed elements mounted on the vessel, can also improve ship performance. Positioning a duct with an integrated fin system in front of the propeller can enable significant power savings, or allow a vessel to travel faster at a given speed. It can be fitted on both newbuildings and older vessels.

Manufacturer Becker Marine Systems claims that its Becker Mewis Duct will allow for energy savings of 3% to 8%[5], depending on the specifications of different vessels.

The weather can have a major impact on a ship’s fuel consumption. With today’s advances in satellite communications, there are now more affordable broadband solutions at sea. This means that there is now much more accurate weather routing information available to ships to better plan their voyage.

The use of weather routing software on ships will not only avoid bad weather that can potentially damage the vessel, but can also reduce fuel consumption by as much as 5% to 6% by plying the optimal route which factors in the weather and its impact on the voyage.[6]

Weather routing software can be linked into or be part of much wider-ranging optimisation tools. Web-based and cloud-based optimisation solutions can help monitor engine performance, provide predictive maintenance tools, as well as adjust the vessel's trim to improve performance.[7]

With such a wide variety of innovative systems available, owners today have plenty of options for improving the performance of their vessels, which can also result in fuel savings and thus, an improved environmental performance.

Sea Asia 2019 is co-organised by UBM (Seatrade) and the Singapore Maritime Foundation, and will take place in Singapore at the Marina Bay Sands® from 9-11 April 2019.

PGT: Why these persistent criticisms of scrubbers are just plain wrong

SEACOR Maya, SEACOR Azteca, SEACOR Warrior and SEACOR Viking to be classed with the BATTERY-Li notation.