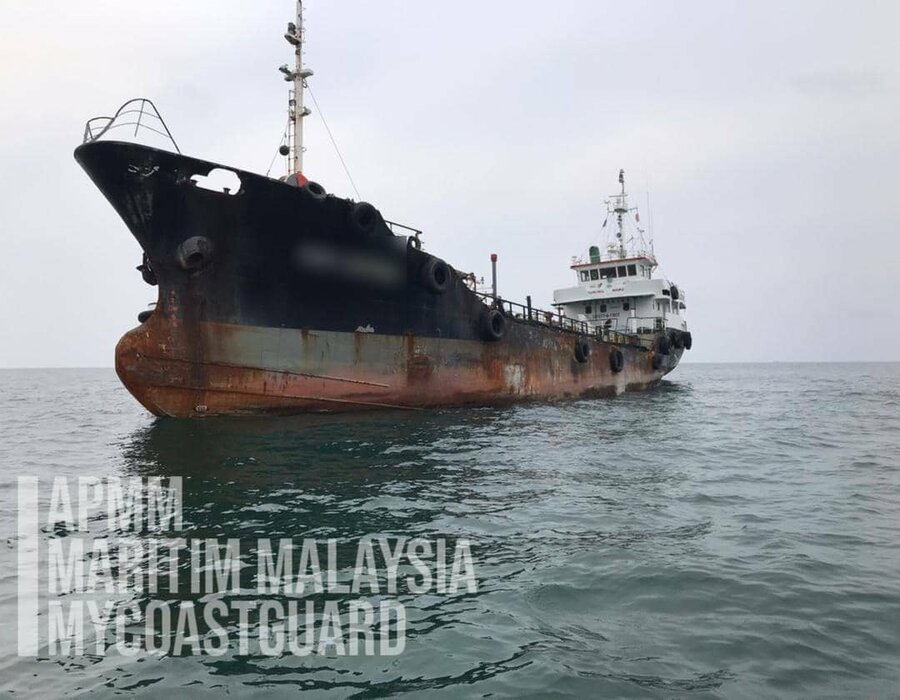 A Saint Kitts and Nevis registered tanker ship was arrested by the Maritime Malaysia Enforcement Agency (MMEA) of Johor State at 10.5 nautical miles north of Tanjung Penawar around 2.00 pm on Saturday (3 July) due to illegal anchoring.

Johor State Maritime Director, First Admiral Nurul Hizam bin Zakaria, said the ship was earlier arrested and fined as much as RM 50,000 on 20 December  2020, for the same offense.

The arrest was conducted by a MMEA patrol during its operation.

An inspection found the ship to be operated by 10 crew members of Indonesia, Bangladesh and Myanmar aged between 24 to 56 years old; all had valid self-introduction documents.

Further inspections on board found the skipper had failed to submit a request for permission to anchor from the authorities.

As such, the ships and crew have been arrested and investigated under Section 49B(1)(l) of the Merchant Shipping Ordinance 1952;  if found guilty, parties can be fined an amount not exceeding RM 100,000, or two years, or both.

“These arrests have shown that there are still ships that are still stubborn and trying to challenge state laws,” said a statement from the MMEA..

“Maritime Malaysia through the Johor State Maritime will continue to establish cooperation with the Malaysian Sea Department (JLM), Marine Police Force (PPM), the Royal Malaysian Customs Department (JKDM) and the National Security Council (MKN) to eradicate the issues of ships that are far away Illegal in the waters of Johor State.”

Malaysian Maritime, also known as the MMEA, will also always ensure the sovereignty and safety of the country’s water is guaranteed and preserved, it adds.

The Johor State Maritime Operations Center can be contacted at its hotline at (07-219 9404) or emergency line MERS 999 for any complaint regarding maritime crime within the region.

Through this expansion, Centerline will acquire six bunker barges operated by Saltchuk’s subsidiary as well as its established customer contracts in California.

‘Despite lingering effects of the pandemic and ongoing supply chain disruptions, we are well positioned to drive growth in our core business activities,’ says Chairman and CEO of WFS.

The plant, which will be one of the largest in the world, will produce 300,000 tonnes of green methanol for use as marine fuel; plant will be located at Bell Bay in northern Tasmania, Australia.