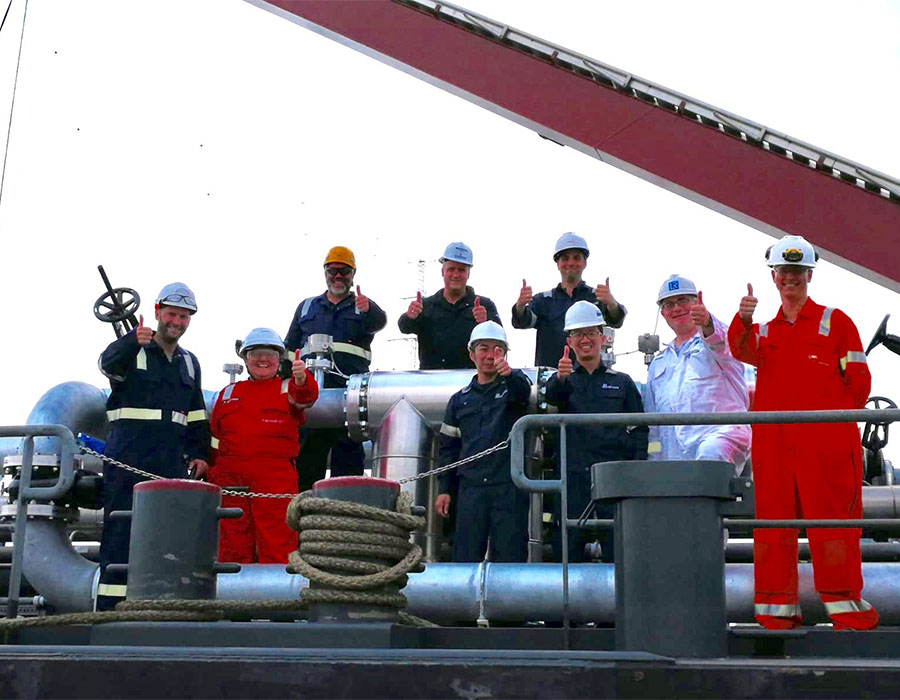 This paper reviews the use of mass flow metering systems (MFMS) and dispels some of the myths surrounding their benefits and operations.

The use of mass flow metering systems (MFMS) is mandated by the Singapore marine port authority because of their ability to enhance the integrity and security of the bunkering process. They are also in widespread use in Hong Kong, the Amsterdam-Rotterdam-Antwerp (ARA) ports and in France, amongst other bunkering locations, but despite their growing adoption there remains some confusion about their benefits, such as the role they play in minimising bunker disputes.

These are just some of the findings revealed by new marine industry research, carried out by ExxonMobil and Bunkerspot, which asked maritime professionals from around the globe about their perception of the technology. Interestingly, MFMS were shown to have delivered clear benefits in the face of the measures taken in response to the pandemic.

A quick dip into the basics

In line with the marine fuels industry’s practice of predominantly selling fuels by mass, not volume, a MFMS directly measures fuel mass, removing the need for complex conversions using traditional measurement methods. It operates on the principles of the Coriolis Effect, which refers to the deflection of moving objects when viewed in a rotating reference frame. In the meter, fluid passes through two u-shaped tubes, which twist as a result of the flow. The angle of deflection from the vibration plane is used to establish flow calibrations.

A major advantage of the system is that the three variables in the refuelling process are independently monitored – direct mass flow, density and temperature. For example, monitoring density can help pick up air in the line. This could create air bubbles and affect measurement readings that traditional methods, such as manual dipping, can sometimes miss.

A mass flow meter, which has no mechanical moving parts, can be used for more than six years in the marine environment with minimal maintenance cost. In Singapore, some meters have actually been in use for eight to nine years. However, based on a conservative six-year usage, the cost per tonne can be as low as USD$0.17 per metric tonne when using a well-maintained MFMS, over and above any other tangible benefits.

To ensure integrity and security across the entire refuelling process, a MFMS should be independently accredited. This should cover information systems, equipment sealing and independent system audits by port authorities or third parties.

This provides a wide range of benefits to vessel operators, marine industry suppliers and regulatory bodies. These include:

In order to better understand the marine industry’s grasp of the technology, ExxonMobil invited a range of maritime professionals to reflect on their experience and opinions around the use of MFMS. Replies were received from across Europe, Africa and South America; respondents represented charterers, vessel owners, bunker suppliers and surveyors. The results were highly informative.

All but one respondent had experienced a bunker dispute of some sort – around 50% said they were common. The remainder of the sample said they happened but were infrequent. What was revealing were the perceptions of the cost of an average bunker dispute; estimates ranged from around US$1,000 up to US$50,000 per stem. When asked to list the ports where bunker disputes are most common ARA ports were named many times. Singapore, which mandates the use of MFMS, wasn’t mentioned once.

When discussing the percentage of bunker quantity issues that go unchallenged by vessel operators, 38% of the sample said at least half. The reasons given for this included a shortage of time, an absence of manpower, a lack of willingness amongst crews to challenge barge operators and an inability to gauge a bunker. “It is very difficult to get an accurate manual tank measurement onboard receiving vessels,” explained a bunker supplier from the sample group.

When asked if vessel operators were prepared to ignore bunker shortages if the price of the fuel from that supplier is significantly lower than others, the split was equal; 43% of respondents answered either ‘yes’ or ‘no’ with the remainder unsure. Where there was more agreement was over the best ways to settle a bunker dispute: investigate the issue and raise a claim against the fuel supplier was the preferred option, although it was pointed out by some respondents that hiring a surveyor was a valuable defence against shortfalls. “I always have a bunker quantity surveyor present during bunkerings. The surveyor settles all disputes, if any, on site,” said one ship owner.

Just 19% said they would inform the authorities (port administrators, police etc.) of a bunker quantity dispute. Significantly, all of the respondents saw the value in maintaining transparency during the bunkering process.

Eighty-seven percent of the sample group had experience of bunkering using a MFMS, although the understanding of how they work ranged from ”basic” and “minimal” to “it’s an entire system that utilises the advantage of a MFM but it must be a closed system that eliminates the possibility of cheating”. Another suggested that “as long as the entire operation, device and parameters are certified, it reduces the risk of fraud”.

However, opinions of MFMS varied quite widely. One bunker supplier said: “They’re a good thing and other places should use them, not only Singapore.” A ship owner remained unconvinced by their veracity. “We still need to be careful in assessing the delivery operation on barge side. As such, the surveyor is playing his role and checking vessels before and after the delivery,” they explained. A surveyor based in Europe believed they “were good to have” as they provide greater transparency during the bunkering process but they are also “an escape for suppliers”.

The sample group was then asked if MFMS could make bunker quantity disputes a thing of the past – 40% said ‘yes’ while 27% said ‘no’; the remainder were ‘unsure’. Despite this, 87% said they would support the mandating of MFMS around the globe as has happened in Singapore. One of the respondents who didn’t support their wider use said: “In ARA ports, barges are already equipped with reliable systems.” The respondent was a surveyor based in ARA.

The final question concerned the role of MFMS during the pandemic as a result of the restrictions brought in to tackle the spread of the virus, such as contactless bunkering. An increase in quantity disputes was highlighted by 38% of the sample; a further 44% was unsure. Many of the respondents were therefore supportive of the use MFMS as “surveyors can’t always board the barge, it’s difficult for them to find missing quantities”.

This drawback was confirmed by other replies. “The problem is that surveyors cannot board the bunkering barge to verify soundings,” said a South American ship owner. And according to Netherlands-based surveyor: “Barge operators don’t allow surveyors onboard, not even with the correct papers or negative Covid test.”

Clearly, there’s an appetite for the greater use of MFMS even if there are still some gaps in the understanding of the core technology. ExxonMobil supports the use third-party accredited MFMS and will continue to implement the technology on its barges, where feasible, to ensure customers receive an efficient and transparent bunkering service without compromising on safety.

*Per 1,000MT stem size delivery at $450/MT. Includes surveyor costs, temperature delivery range and density delivery range but does not include dip tank measurement errors. A temperature measurement delta of 10°C amounts for up to US $3,150. A 3kg/m3 density difference amounts for up to US $1,500. These variables can be avoided by the use of a secure mass flow metering system, therefore negating the need of a quantity surveyor, with an estimated cost of up to US $2,000.

INTERTANKO appeals to government authorities to crack down on suppliers of contaminated fuel oil.

Tugboat is powered by an electric propulsion system that combines e5Lab-developed large-capacity lithium-ion batteries and a diesel engine.

Alexei Medvedev (pictured) and Mikhail Antonov explain how regulation will affect the company in an interview.

Meeting will be held from 10 am onwards during 6 April at 204B Telok Ayer Street Singapore 068640, according to a Government Gazette notice.