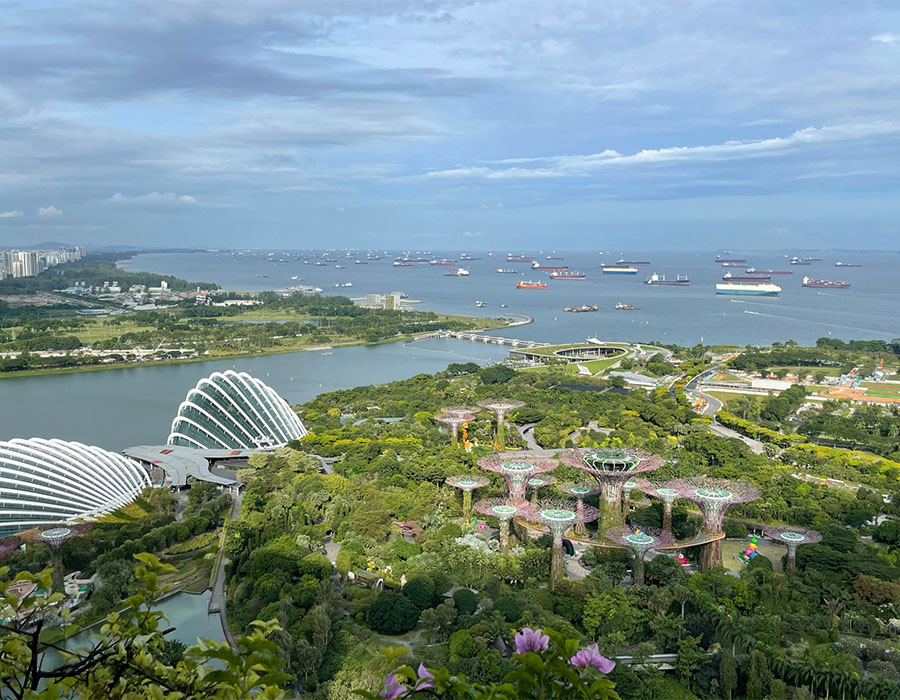 The recent COP26 summit in Glasgow made it crystal clear that shipping is heading for carbon zero, but the route there is far from it. The grand challenge of our time remains: how to fuel the maritime industry’s transition to a carbon neutral future?

This is a question Singapore has prioritized as part of its green transition.

It is the world’s largest bunkering hub. It imports all the gas it needs to power households and the economy. And the strategically located island state has always been looking into the future to keep a leading edge.

In my view, Singapore is in a very good position to play a key role in the decarbonization of the global maritime industry. An important step was the establishment of the Global Centre for Maritime Decarbonisation (GCMD), in which DNV readily agreed to become a founding partner.

The Centre and its partners have now started to explore a portfolio of alternative fuels and strategies that will hopefully enable shipping globally to significantly reduce its greenhouse gas (GHG) emissions.

New fuels on the horizon include sustainable biofuels, biodiesel, bio-LNG, methanol, hydrogen, and ammonia, amongst others.

However, they “must be greener than the incumbent fuels, have a lower carbon life cycle, otherwise it would be a waste of resources to venture into such investments, as it will not reduce the overall carbon/GHG burden on the environment,” rightly notes GCMD Chief Technology Officer Dr Sanjay Kuttan.

GCMD picked ammonia as the first fuel to take a closer look into and commissioned a technical evaluation to define the safety and operational envelopes for ammonia bunkering in Singapore.

So, we must ask ourselves, how viable is ammonia and is it safe enough for widespread use as a marine fuel in Singapore, or anywhere, for that matter?

From our own studies and from pilot programmes conducted in Europe in particular, ammonia comes clean as an ideal marine fuel, as it provides better energy performance than hydrogen and it’s on a par with LNG.

Not only does ammonia burn CO₂-free, like hydrogen, but it has a higher energy density and is easier to store and transport than hydrogen, as it doesn’t require cryogenic – or ultra-cool – storage.

But what about green ammonia? How is it produced and where does it come from?

We know that it is currently going through marine fuel trials in Europe and Japan, and we see that one of the best Asia Pacific sources for green ammonia (and/or green hydrogen) could be Australia, as it is already a major supplier of LNG.

Green ammonia can be produced from green hydrogen, a well-established renewable energy source. Australia already has plans for major green hydrogen plants. In addition, ammonia is widely used there in agriculture, most commonly as a fertiliser.

Another advantage for liquid fuels like hydrogen or ammonia is that they can safely be used alongside LNG during the transition phase. We also know that ship engines are being designed in Europe to accommodate ammonia, as an onboard fuel, alongside LNG.

Trials in Norway, for example, have shown that ammonia can be safely deployed even in passenger vessels and the researchers clearly could not identify any “incomprehensible technical or safety barriers”.

The decarbonization process for the global maritime industry is not going to be easy. I know there are challenges, but I see considerable opportunities.

With the right level of commitment and concentrated effort, ammonia could replace LNG as the predominant alternative shipping fuel in the future, with significant scaling after 2030.

But, of course, we must continue to consider – and put to the test – a whole range of alternatives fuels and strategies.

As our Maritime Forecast to 2050 says, it’s equally important to keep in mind a number of essential measures towards maritime industry decarbonization, including greater energy efficiency, fuel flexibility and weighing up all Fuel Ready solutions.

When all is said and done, in the words of our DNV Maritime CEO Knut Ørbeck-Nilssen, “the true fuel of the future is collaboration”.

Hamburg Sud and Electrolux team up to lower emissions

Electrolux bears additional costs for Santa Catarina to switchover to MGO at certain ports in March.