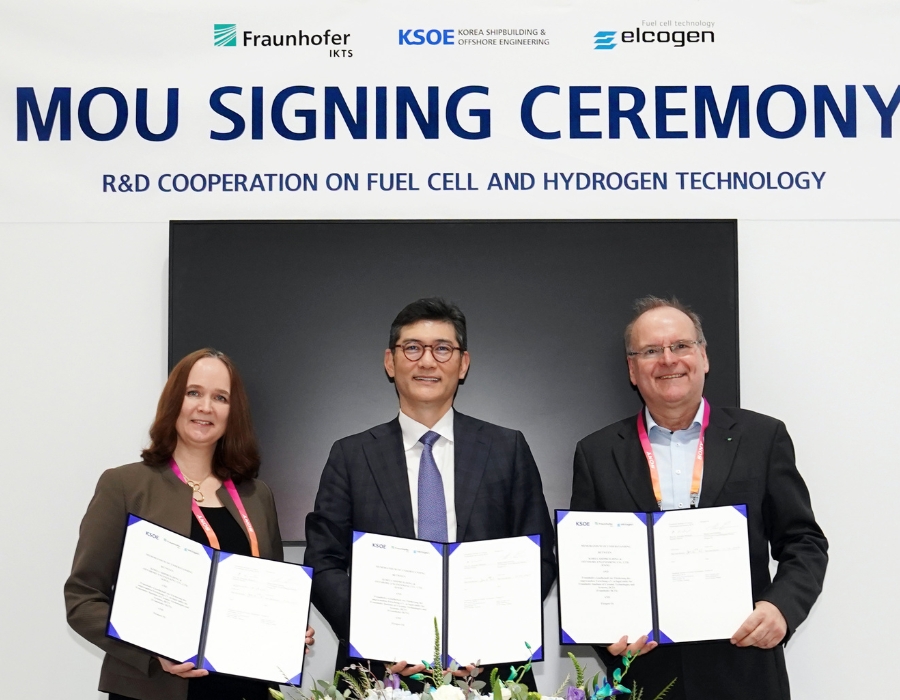 KSOE said it recently signed a memorandum of understanding (MOU) with Fraunhofer in Germany and Elkogen in Estonia for the development of solid oxide fuel cell (SOFC) and water electrolysis system.

According to the agreement, KSOE, along with Fraunhofer and Elcogen, will begin detailed design and prototype testing of large-capacity solid fuel cell systems used for ships and power generation. KSOE and Fraunhofer have already been working on the basic design of the fuel cell system since February last year.

Along with this, KSOE plans to secure technology to produce eco-friendly hydrogen by utilising Fraunhofer’s water electrolysis technology and Elcogen’s ability to manufacture core parts of fuel cells.

Fraunhofer is Europe’s largest applied R&D institution with 72 laboratories across Germany. Researches high-performance ceramic application technology and possesses world-class technology in the field of solid oxide fuel cell and water electrolysis technology. Established in 2001, Elcogen is a small but strong global company that manufactures cells, which are core components of solid oxide fuel cells, and stacks, which are aggregates of cells.

A solid oxide fuel cell is a device that produces electrical energy by reacting not only hydrogen but also various fuels such as natural gas, ammonia, methanol, and biofuel with oxygen. It is suitable for ship engines and cogeneration as it has high power generation efficiency and can recycle waste heat generated by high temperature (600~1000℃) operation. Among the various types of fuel cells, it is evaluated as the most advanced technology to date.

According to Roland Berger, a German consulting firm, the solid oxide fuel cell market, worth $460 million this year, is expected to grow at an average annual rate of 40.7% by 2030 to reach about $7.12 billion.

“Through this agreement, eco-friendly hydrogen production and fuel cell We plan to secure core technologies in the manufacturing field.”

Meanwhile, KSOE formed a ‘consortium for demonstration of fuel cells for ships’ with global energy companies such as Shell and Doosan Fuel Cell in October of last year and is conducting a fuel cell large-scale ship demonstration project.

Singapore and Rotterdam are among the largest bunkering ports in the world, making them vital links on the Asian-European shipping lanes, said MPA.