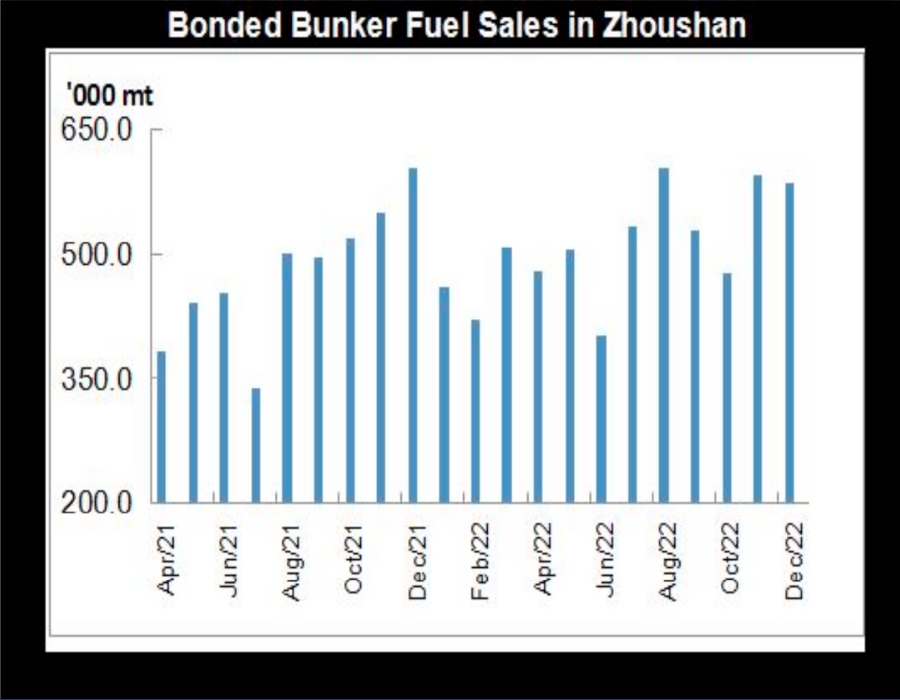 China tallied a dip in its bonded bunker fuel sales in December 2022, amid dwindling consumption, a weak global economy and the tightening supply of bonded resources in northern regions.

The country sold about 1.53 million mt of bonded bunker fuel in the month, edging down by 0.65% month on month, JLC’s data shows. Specifically, the sales by Chimbusco, SinoBunker and China ChangJiang Bunker (Sinopec) slipped to 550,000 mt, 50,000 mt and 40,000 mt in the month respectively, while those by Sinopec Zhoushan climbed to 590,000 mt. In addition, suppliers with local licenses sold approximately 300,000 mt.

China saw a rebound in its bonded bunker fuel exports in November, owing to an uptick in domestic low-sulfur fuel oil (LSFO) production, also because of a relatively low base in October. The country exported about 1.29 million mt of bonded bunker fuel in November, a bounce of 4.95% month on month, according to the data from the General Administration of Customs of PRC (GACC).

Some Chinese refineries continued to boost their LSFO production in the month, as state-owned refiners still had sufficient export quotas, resulting in a rise in bonded bunker fuel exports. China tallied about 1.40 million mt of LSFO output by Chinese refiners in November, growing by 5.34% month on month and 37.25% year on year, JLC’s data shows.

However, with domestic bonded bunker fuel prices falling, it was less profitable for refineries to produce LSFO. Under the interplay of abundant export quotas and fewer margins, most refineries maintained largely stable LSFO production in the month, putting a cap on the monthly margin growth.

Also underlying the increase in the exports was the relatively low base in the previous month. China’s bonded bunker fuel exports plunged to 1.23 million mt in October 2022, hitting a 31-month low, GACC data shows.

On a year-on-year comparison, however, the exports plunged by 30.23% in November, GACC data shows. The plunge mainly came as demand from the global shipping market had been strongly hit by the epidemic recurrence over the year. 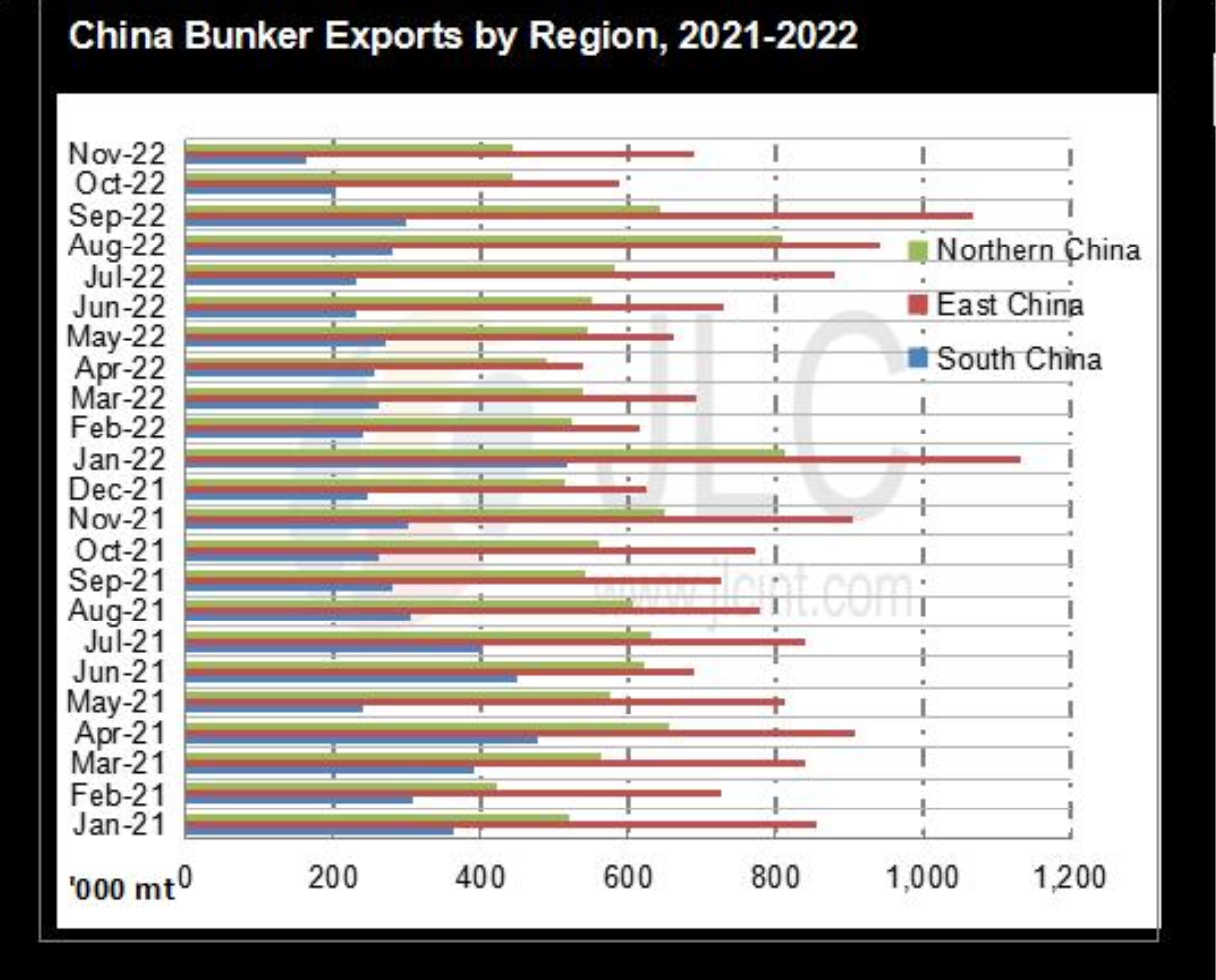 Domestic-trade bunker fuel demand shrank further in December as most downstream buyers still held a wait-and-see attitude when the negative impact of the epidemic lingered, though China gradually removed its virus-related restrictions.

The demand for heavy bunker fuel contracted to 340,000 mt in the month, down by 20,000 mt or 5.56% from November, JLC’s data indicates. Meanwhile, domestic-trade light bunker fuel demand slid to around 120,000 mt, a drop of 10,000 mt or 7.69% month on month. Light bunker fuel demand also moved lower, as buyers who were bearish on the bunker fuel market continued to base their purchases on rigid demand, despite a decline in prices of marine gas oil (MGO).

The country imported approximately 630,000 mt of bonded bunker fuel in November, a leap of 25.02% from the previous month, according to data from the General Administration of Customs of PRC (GACC).

On a year-on-year comparison, China’s bonded bunker fuel imports tumbled by 29.70%, GACC data shows. Underlying the plunge was a boost in domestic LSFO production. The country tallied about 1.40 million mt of LSFO output in November, surging by 37.25% year on year, JLC’s data shows.

China imported an accumulation of about 4.70 million mt of bonded bunker fuel in the first eleven months of 2022, a nosedive of 40.93% year on year, decelerating from a slump of 42.39% in January-October, GACC data shows. 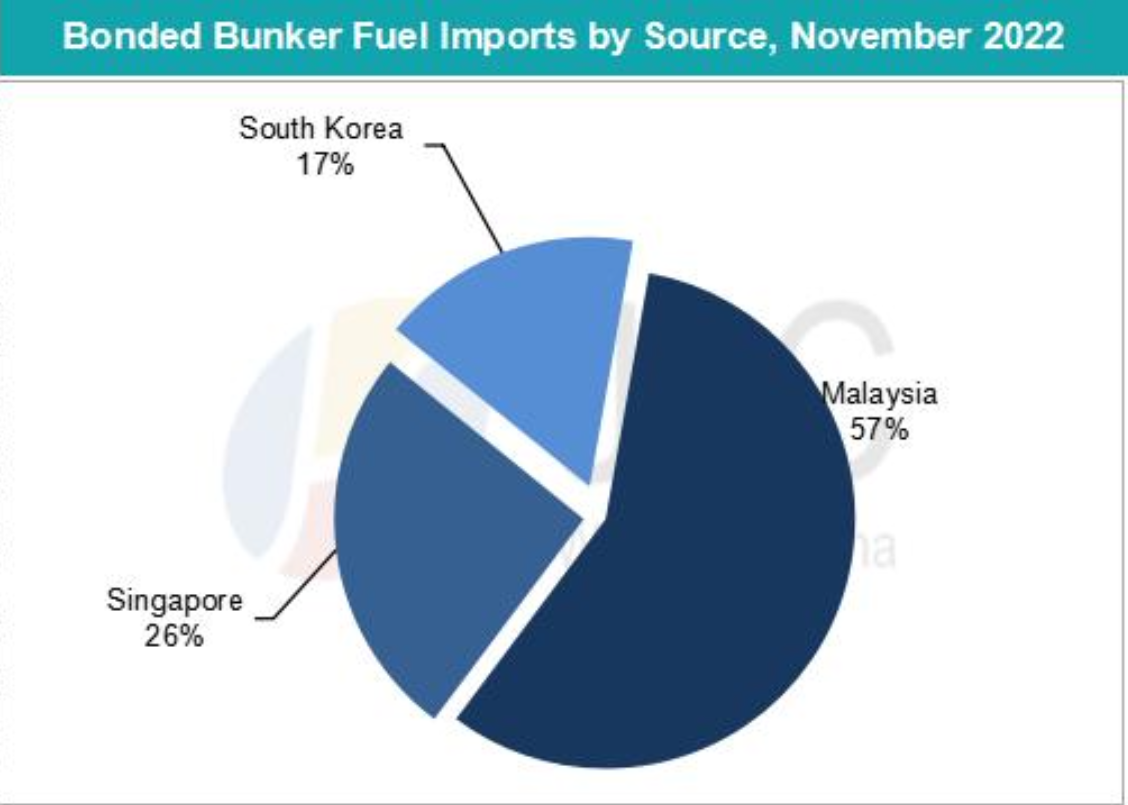 Domestic blended heavy bunker fuel supply continued to tighten in the month, as blenders preferred low inventory with the year-end drawing near and dared not to make deals easily, though blendstock prices went down. In addition, some small oil suppliers exited the market ahead of the Spring Festival, which also contributed to the supply decline.

Conversely, the supply of domestic blended marine gas oil (MGO) climbed to 170,000 mt, gaining 20,000 mt or 13.33%, the data shows. As Chinese refiners had achieved their oil product export targets for 2022, the supply of diesel that flowed into the bunker field increased. 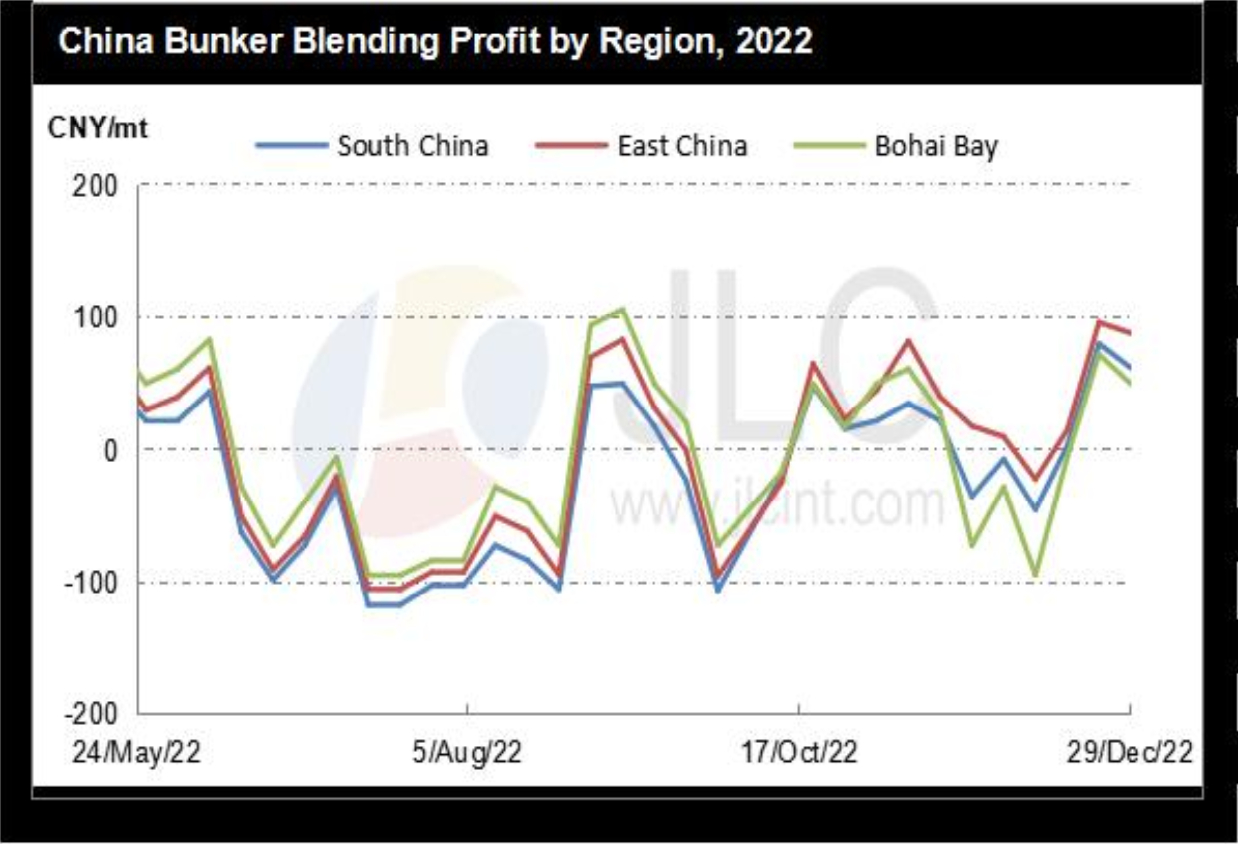 Sinfeng FY2018 revenue up despite 17% fall in marine fuel sales

Still in the process of conducting an investigation of alleged debts to Coastal Oil Singapore, says Cosco.

Document provides specific examples for the recording of information within the Oil Record Book Part I including bunkering of fuel or bulk lubricating oil and collection of sludge.