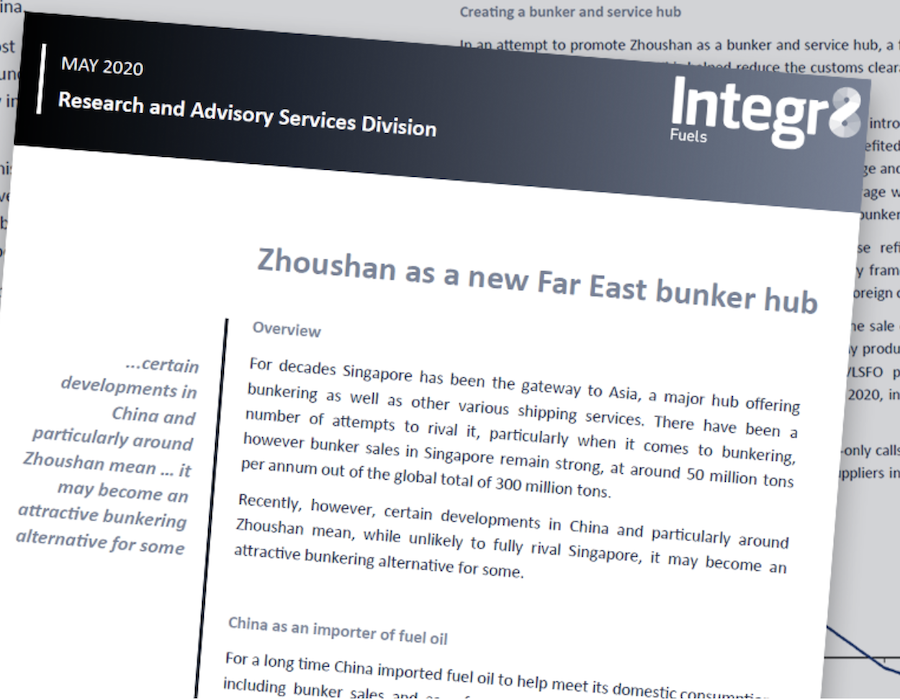 Integr8 Fuels, the bunker trading and brokerage arm of Navig8, on Thursday (14 May) published an analysis on China’s progress into turning Zhoushan Port into a self-sufficient bunkering hub; it was written by Senior Research Analyst, Anton Shamray:

For decades Singapore has been the gateway to Asia, a major hub offering bunkering as well as other various shipping services. There have been a number of attempts to rival it, particularly when it comes to bunkering, however bunker sales in Singapore remain strong, at around 50 million tons per annum out of the global total of 300 million tons.

Recently, however, certain developments in China and particularly around Zhoushan mean, while unlikely to fully rival Singapore, it may become an attractive bunkering alternative for some.

China as an importer of fuel oil

For a long time China imported fuel oil to help meet its domestic consumption, including bunker sales and as a feed for the secondary refinery units. The consumption as well as the sales tax were applicable on all bunker sales, and given that the majority of fuel oil was imported from Singapore, this was evident in the premium at which bunker fuel was priced in China.

Figure 1 shows the Zhoushan HSFO price premium to Singapore. Zhoushan has the share of around 30% of all bunker deliveries in China. 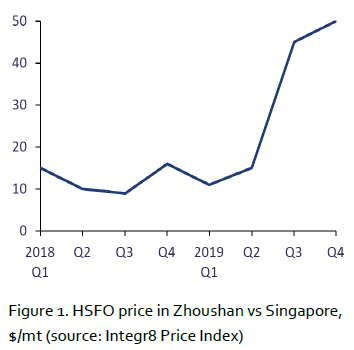 However, this is now changing as the Chinese government has a vision of creating a bunkering and a service hub in the port of Zhoushan.

Certain steps towards achieving this goal have already been made and the market has reacted accordingly.

Creating a bunker and service hub

In an attempt to promote Zhoushan as a bunker and service hub, a free trade zone was established in 2017. This helped reduce the customs clearance time to avoid delays in supplying vessels.

Further to this in July 2018, a country-wide tax incentive was introduced for marine fuel blending using imported feedstocks. Zhoushan benefited the most as, unlike many other Chinese ports, it boasts substantial storage and blending capacity and there is more under construction. Access to storage was one of the key factors which enabled Singapore to develop as a large bunkering hub.

This, however, was still not enough to encourage Chinese refiners and blenders, who had the capacity but no favourable regulatory framework, to produce more marine fuel to cover domestic and potentially foreign demand.

In February 2020 tax rebates started to apply in China for the sale of marine fuels, increasing the regional competitiveness of domestically produced fuels. Major Chinese refiners announced plans to ramp up VLSFO production amounting to over 20 million tons of VLSFO production in 2020, in line with the annual Chinese domestic and bonded bunker demand.

Zhoushan is increasingly becoming the key port for bunker-only calls in China, where they plan to sell 7 million tons of bonded fuel via 11 suppliers in 2020, up from 3.6 million tons in 2018. Such an increase brings Zhoushan closer to Rotterdam and Fujairah by volume.

These developments pushed the price of VLSFO in Zhoushan lower (Figure 2), raising its competitiveness against other regional ports, including Singapore. 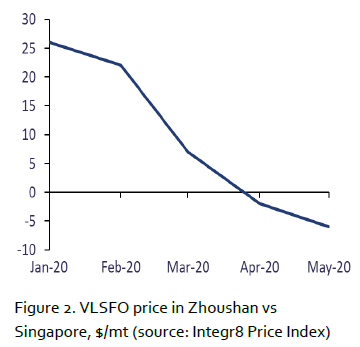 With the introduction of tax rebates and increased local production, average monthly VLSFO prices in Zhoushan moved from over $20/mt above Singapore early this year to a discount more recently. This trend is likely to continue as 10 million tons of VLSFO quotas for bonded sales have just been released; an extra 5 million tons may be issued later this year, potentially replacing imports.

There is already a solid base for the increased Chinese VLSFO production and sales from Zhoushan, supporting the government intention to create a vessel service hub. This is already visible as bunker enquiries and sales are up.

As an example, Figure 3 shows the cumulative growth in the number of stems Integr8 Fuels concluded in Zhoushan. 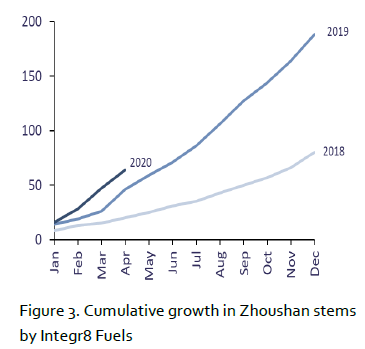 The Zhoushan growth has also been due to the favourable calling fee policies. With two bunker anchorages, inner and outer, the outer anchorage is free of fees, which makes it similar to Singapore OPL. The inner anchorage charges half of the pilotage fee for bunker-only calls and none if the outer anchorage is unavailable due to bad weather, although other taxes may still apply.

It is understood that the first foreign-flagged vessel was supplied with VLSFO at the Zhoushan outer anchorage in mid-December and many more vessels have followed since.

All these developments increase the attractiveness of Zhoushan as a bunker and vessel services port. There have already been reports of vessels, previously used to bunker elsewhere, deviating to Zhoushan due to the growing price difference. More calls at Zhoushan will help recognise it as a reliable bunker and supply option in the maritime community.

Important decisions and steps have already been made towards reaching China’s goal of being self-sufficient in bunker fuel production and supply and developing Zhoushan as a key bunkering and service location in the Far East.

‘Pick up in the oil and gas industry continued to contribute positively in demand for the bunkering business.’

Wax Appearance Temperature is the actual Cloud Point of new fuels and is the most definitive cold-flow property to prevent wax precipitation, states VPS.