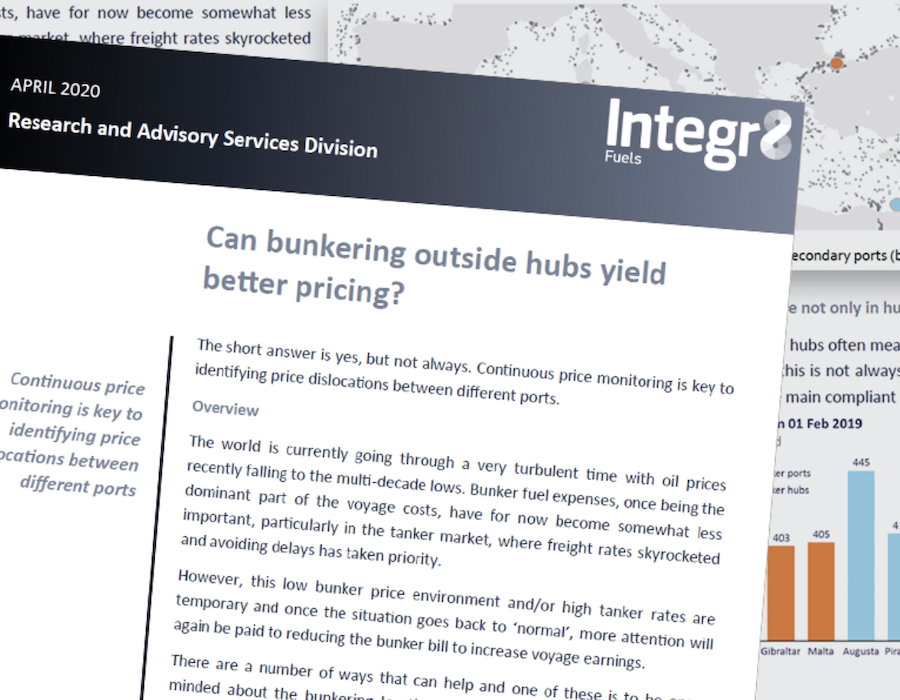 Integr8 Fuels, the bunker trading and brokerage arm of Navig8, on Tuesday (28 April) published an analysis on factors to consider when selecting a bunker port to optimise voyage savings; it was written by Senior Research Analyst, Anton Shamray:

The short answer is yes, but not always. Continuous price monitoring is key to identifying price dislocations between different ports.

The world is currently going through a very turbulent time with oil prices recently falling to the multi-decade lows. Bunker fuel expenses, once being the dominant part of the voyage costs, have for now become somewhat less important, particularly in the tanker market, where freight rates skyrocketed and avoiding delays has taken priority.

However, this low bunker price environment and/or high tanker rates are temporary and once the situation goes back to ‘normal’, more attention will again be paid to reducing the bunker bill to increase voyage earnings.

There are a number of ways that can help and one of these is to be open-minded about the bunkering location, which at times may mean refuelling outside of the major hubs if prices dictate so.

Bunker-only calls no longer a feature of hub ports

The bunker market has transformed extensively in the past couple of decades. From a limited number of bunker-only ports (mostly hubs), many more are now open for bunker-only calls.

As an example, Figure 1 shows both the hubs and the secondary bunker-only locations in the Mediterranean together with vessel traffic.

As can be seen, in addition to the main hubs bunkers can now be picked up in some smaller ports like Lisbon, Sarroch, Augusta, Piraeus as well as Kali Limenes and off-shore in the South Eastern part of the Mediterranean, pricing for which can be obtained on enquiry. Therefore, it is important to monitor prices not only in the hub ports but also in the smaller locations.

The price, of course, is not the only factor to consider. Quality, availability, weather and other delays together with calling costs can influence the bunker location choice. However, with these factors often being equal or near equal, the port and supplier offering the best price usually gets the stem.

Cheapest price not only in hubs

While bunker hubs often mean a higher number of suppliers, better availability and pricing, this is not always the case, particularly following the transition to VLSFO as the main compliant fuel.

The chart above shows an example of what the ‘normal’ bunker pricing would look like. Just over a year ago, in February 2019, a buyer or an operator of a vessel needing bunkers passing through the Mediterranean would habitually enquire in Gibraltar or Malta and typically get the best price compared with the alternatives.

Then the market started changing prior to the IMO2020 transition so the usual pricing relationships between ports were broken. HSFO in some hubs started to sell at hefty premiums to the secondary ports. The bottom chart on Figure 2 shows the $40/mt premium Malta attracted over neighbouring Augusta in early October 2019, potentially resulting in a $20,000 overpayment on a 500mt stem.

From 01 January 2020, with the market fully transitioning to VLSFO as the main compliant fuel, price distortions spiked. For a period of time and due to the very limited availability, Singapore VLSFO was pricing way above anywhere in the region and even above LSMGO. While the bunker market has largely settled, certain pricing dislocations have remained.

Figure 3 shows a couple of recent VLSFO price dislocation cases and the emergence of Lisbon as a viable and often well-priced alternative, which has so far in April on average traded at a $20/mt discount to Gibraltar.

Excluding Lisbon, on 20 March 2020 it was ‘business as usual’ with both Gibraltar and Malta priced at a discount to other ports. However just over a month on, VLSFO prices dropped across the board following the drop in oil prices, although VLSFO in Gibraltar remained relatively strong.

It is estimated that booking a 500mt stem in Gibraltar vs Malta or Lisbon on 22 Apr 2020 would have resulted in at least $10,000 in overpayment. Besides this, Piraeus would have also become a viable option for vessels sailing from the North East of the Mediterranean.

Overall, it is worth noting that bunker prices fluctuate on a daily basis and bunker ports (including hubs) may frequently move from ‘expensive’ to ‘cheap’. Such price movements as well as delays, fuel quality, and changes in port call costs should be closely monitored in order to select the most optimal bunker port, achieve bunker bill savings and increase voyage revenues.

BIMCO: Reminder to complete bunker fuel quality and safety survey before 6 May

Survey’s main focus is on problematic properties of IMO 2020 compliant fuel oil that may lead to vessel performance problems such as increased sludge discharge.

IMO: New requirements for fuel oil sampling and testing have entered into force

Amendments intended to support port State control and other environmental authorities to enhance a global level-playing-field in enforcement of IMO 2020.

Enagás, through its subsidiary Scale Gas, and Peninsula, have agreed to construct a liquefied natural gas (LNG) supply vessel for delivery by June 2023.