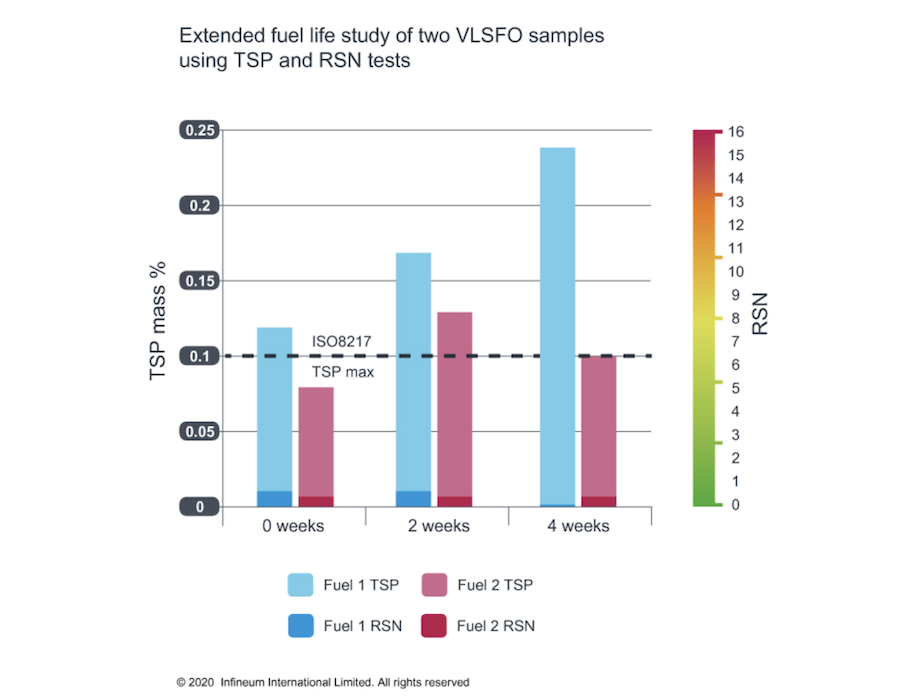 Specifically, the article looks at how VLSFOs on board ships may deteriorate over time and show how certain testing protocols may give ship operators misleading information about fuel stability.

During the second and third quarters of 2020, the sedimentation levels in VLSFO appear to have stabilised at point of sale. However, ship operators are still reporting stability issues associated with VLSFO, with the real problem being related to the shelf life of the fuel.

The article looks at extended fuel life studies using the Total Sediment Potential (TSP) and the Turbiscan® test which measures the Reserve Stability Number (RSN) by adding a fixed volume of heptane to a toluene-diluted fuel oil sample.

Data collected shows that there is no correlation between TSP and RSN and hence extra care should be taken when using RSN as an indicator of VLSFO stability.

Even when tested for long-term fuel aging, the Reserve Stability Number test determined the fuel was in the extremely stable zone at the start of the test and it did not deteriorate over the four-week period.

Overall, it was determined that while a deterioration in TSP was seen, there was no significant change in RSN i.e. the degradation of the fuel was not detected by the Reserve Stability Number test.

This merely goes to reinforce the CIMAC position that this test cannot be used to predict fuel stability or compatibility.

The writers hypothesized that the issue lies with the fuel oil dilution process in the RSN test procedure, where the test fuel oil is initially dissolved with toluene and subsequently treated with heptane.

It is proposed that the toluene/heptane ratios used in the test are too high (up to 40:1) to provide a realistic assessment of a fuel’s ability to maintain asphaltenes in solution over any time period.

The assessments, over an extended period of time, confirm the concerns held by International Council on Combustion Engines (CIMAC) that the Reserve Stability Number test is unable to accurately predict the compatibility and stability of marine fuels.

This leads the writers to conclude that operators must take extra care if RSN data is used as an indicator of VLSFO stability.

A full copy of the article by Infineum is available here.