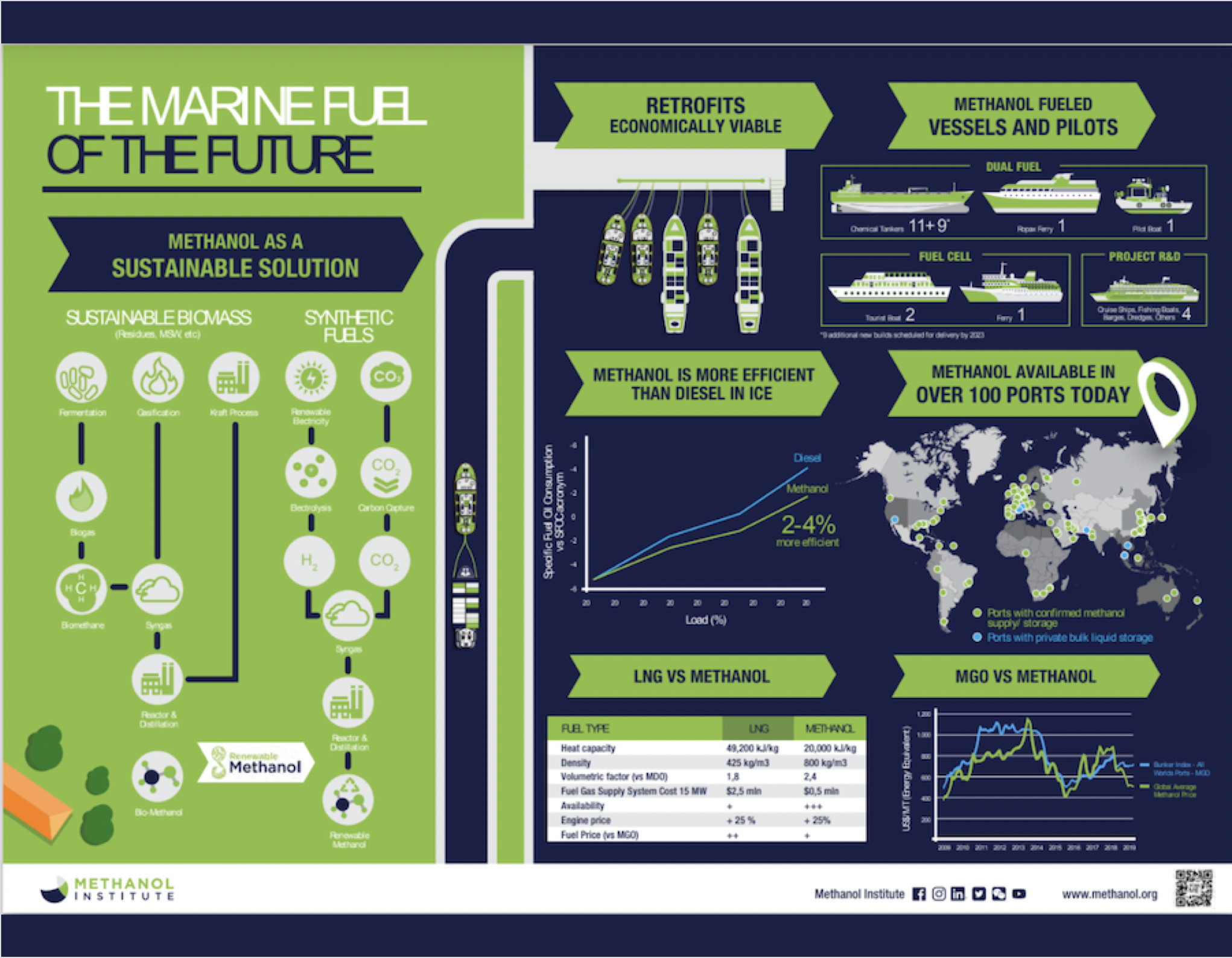 Though regulation remains critical to implementation, the drive from the industry’s market mechanisms will accelerate shipping’s journey to decarbonisation, said GMF.

In both cases, perceptions about zero carbon fuels need to be aligned with reality. Some options will never scale or be reliable enough for large scale deployment; energy efficiency is important but can only provide marginal gains to conventional vessel designs.

This is a process of evolution: of regulation, technology and public acceptance and it requires accurate information to be shared so that industry can make informed decisions based on comparative information.

The Global Maritime Forum said it has done just that with this report.

The central conclusion of this initial publication is that Methanol, produced from a combination of hydrogen and CO or CO2 could be more easily available than green or blue (renewable) ammonia in the short term, as dual methanol-HFO engines are already commercially available.

With the IMO framework for its use as a marine fuel recently approved, Methanol answers all the primary demands for a low carbon interim fuel and a long term zero carbon one.

The report also notes the paradox that though ‘the availability of propulsion systems and the [subsequently approved] safety and fuel handling regulations position methanol as more readily available than ammonia for projects today, ammonia is attracting increasing attention from the industry’.

Industry perception of fuel safety risk is that the physical properties of methanol, ammonia and hydrogen make them either more flammable or more toxic than conventional HFO.

This is not the case for Methanol. While all fuels are toxic, Methanol is no more toxic than diesel and is miscible in water, making it far safer for the physical environment. Fuel-specific safety and handling procedures can mitigate against these risks and in the case of Methanol, are already in place.

Safety and fuel handling regulations – established either by IMO or by domestic regulators – must be passed for any new marine fuel, a requirement that has already been met for Methanol.

Clear industry guidelines as well as more extensive experience of use as marine fuels for commercial-scale operations should address remaining concerns, noted GMF.

Whilst ammonia and hydrogen are already transported as cargo, those regulations are not yet in place and will need to account for the toxicity and flammability risks of each fuel.

The GMF study concludes that for the purpose of testing the reliability of new marine fuels throughout the shipping value chain, there might be a case for a transitional use of ammonia and Methanol produced from blue hydrogen (gas reforming combined with carbon capture) or even from grey hydrogen (high-carbon conventional hydrogen), which would currently be respectively 25% and 40% cheaper than green hydrogen from renewable power electrolysis.

Used as a marine fuel conventional Methanol emits no sulfur, very low PM and according to data from MAN Energy Solutions has carbon dioxide emissions around 20% lower than conventional marine fuel oil.

To meet IMO NOx Tier III requirements, Methanol can be blended with water which brings the ship into compliance without the need for expensive exhaust gas after treatment.

Another longer term model for green Methanol could be CO2 input from Direct Air Capture, a technology still in its nascent stages and only expected to be commercially available in the late 2020s.

Other sources could include capturing carbon feedstocks from the flue gases of industries such pulp and paper, steel and cement, and biogenic sources of CO2 from biomass gasification facilities.

If the financing can be unlocked to build the facilities necessary to advance DAC and the production of green hydrogen, the industry could adopt Methanol now, enjoy the near-zero pollution, lower CO2 emissions dividend and adopt green Methanol as it becomes available.

In the meantime, the report states, the industry should ‘seize every opportunity’ to repurpose and retrofit existing infrastructure and assets, especially for ammonia and Methanol production, fuel storage and bunker vessels, to minimise upfront capital investment.