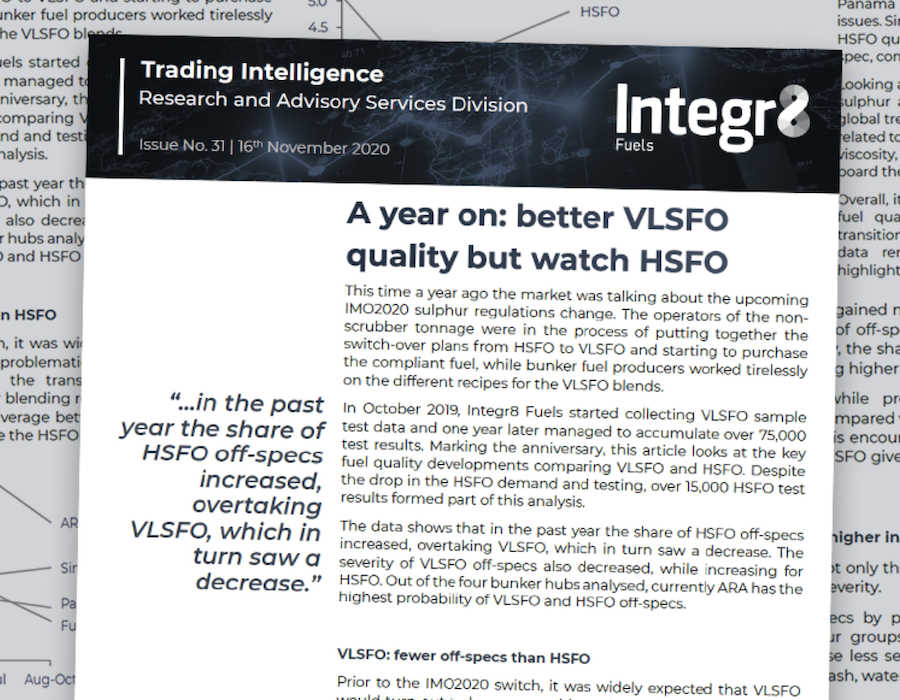 Integr8 Fuels, the bunker trading and brokerage arm of Navig8, on Monday (16 November) published an analysis on the observed increase in off-spec HSFO in 2020, even overtaking VLSFO especially in the ARA region; it was written by Anton Shamray, Senior Research Analyst:

This time a year ago the market was talking about the upcoming IMO2020 sulphur regulations change. The operators of the non-scrubber tonnage were in the process of putting together the switch-over plans from HSFO to VLSFO and starting to purchase the compliant fuel, while bunker fuel producers worked tirelessly on the different recipes for the VLSFO blends.

In October 2019, Integr8 Fuels started collecting VLSFO sample test data and one year later managed to accumulate over 75,000 test results. Marking the anniversary, this article looks at the key fuel quality developments comparing VLSFO and HSFO. Despite the drop in the HSFO demand and testing, over 15,000 HSFO test results formed part of this analysis.

The data shows that in the past year the share of HSFO off-specs increased, overtaking VLSFO, which in turn saw a decrease. The severity of VLSFO off-specs also decreased, while increasing for HSFO. Out of the four bunker hubs analysed, currently ARA has the highest probability of VLSFO and HSFO off-specs.

Prior to the IMO2020 switch, it was widely expected that VLSFO would turn out to be more problematic than HSFO and this was indeed the case early in the transition. Given that VLSFO producers had to hone their blending recipes, the share of VLSFO off-specs stood at 5.1% on average between November 2019 and January 2020, almost double the HSFO share (Figure 1). 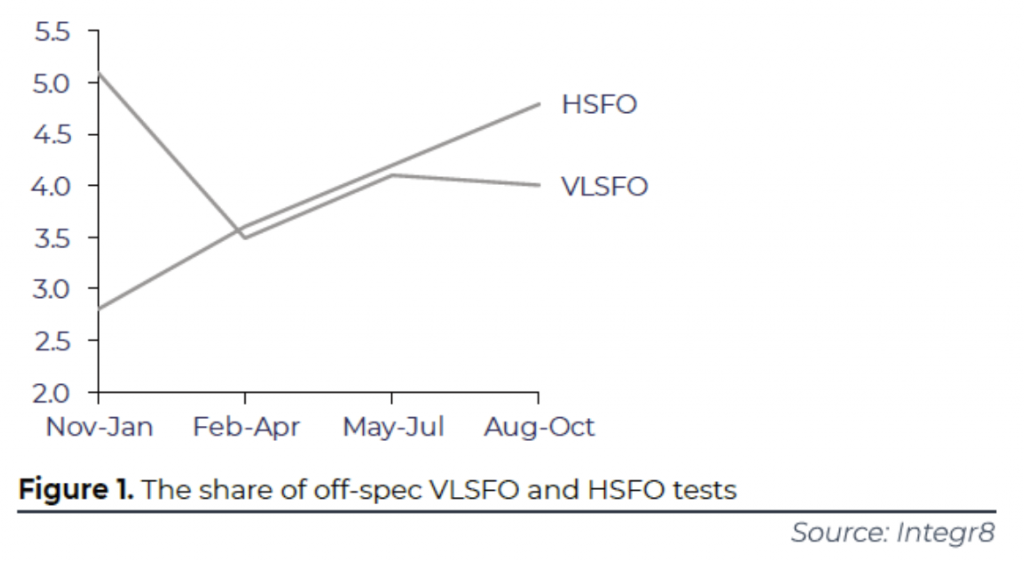 As the year went by and producers gained more experience with VLSFO, the reduction in the share of off-specs followed. On the other hand, and quite unexpectedly, the share of HSFO off-specs steadily increased, currently standing higher than VLSFO.

This development shows that while previously HSFO was considered an “easier” fuel to buy compared with VLSFO, this is no longer the case. The bunker buyer is encouraged to exercise the same due diligence when buying HSFO given the increase in the share of off-specs.

Fuel quality data shows that it is not only the share of VLSFO off-specs that decreased but also the severity.

Figure 2 breaks down the off-specs by parameter, which for simplicity have been put into four groups. The ‘Other’ group contains the parameters that cause less severe quality issues if found to be off-spec comprising of ash, water, sodium and others.

In VLSFO there has been a steady reduction in the prevalence of sulphur and TSP (a measure of fuel stability) off-specs, which are critical quality parameters, while the occurrence of off-specs in the ‘Other’ group has increased with sodium in particular causing some issues in a number of ports in Asia.

HSFO shows a very different trend. Both sulphur and TSP off-specs are on the rise, mostly driven by TSP. This may potentially indicate a change in the composition of HSFO, whereby the formulations are becoming more “complex”.

While the above changes are good news for the VLSFO users, HSFO buyers should be aware of the rising TSP off-specs.

Watch out for VLSFO and HSFO quality issues in ARA

Looking at the global quality averages can help understand the general direction, although when it comes to bunkering vessels, individual ports, which collectively make up the global trend, should also be looked into. Figure 3 shows the breakdown of VLSFO and HSFO off-specs in four key global bunkering hubs.

The share of VLSFO off-specs in ARA, despite a drop in August – October, remains much higher than in the other ports and above the global average. The picture is similar for HSFO, with the share of ARA off-specs rising to the highest in August – October, while Panama and Fujairah seem to have dealt with the past quality issues. Singapore on the contrary remains one of the best ports for HSFO quality where less than 1 in 100 HSFO stems are tested off-spec, compared with almost 8 in 100 in ARA.

Looking at the severity of VLSFO off-specs in ARA, it is a mixture of sulphur and TSP issues, despite the reduction of these in the global trend. On the other hand, the HSFO issues here are mostly related to density (also with a sharp increase in St. Petersburg) and viscosity, which are less critical and can often be handled well on board the vessel.

Overall, it has been an interesting year when it comes to bunker fuel quality and despite the initial concerns the IMO2020 transition generally went well. However, monitoring fuel quality data remains important and Integr8 Fuels will continue highlighting any significant fuel quality trends going forward.