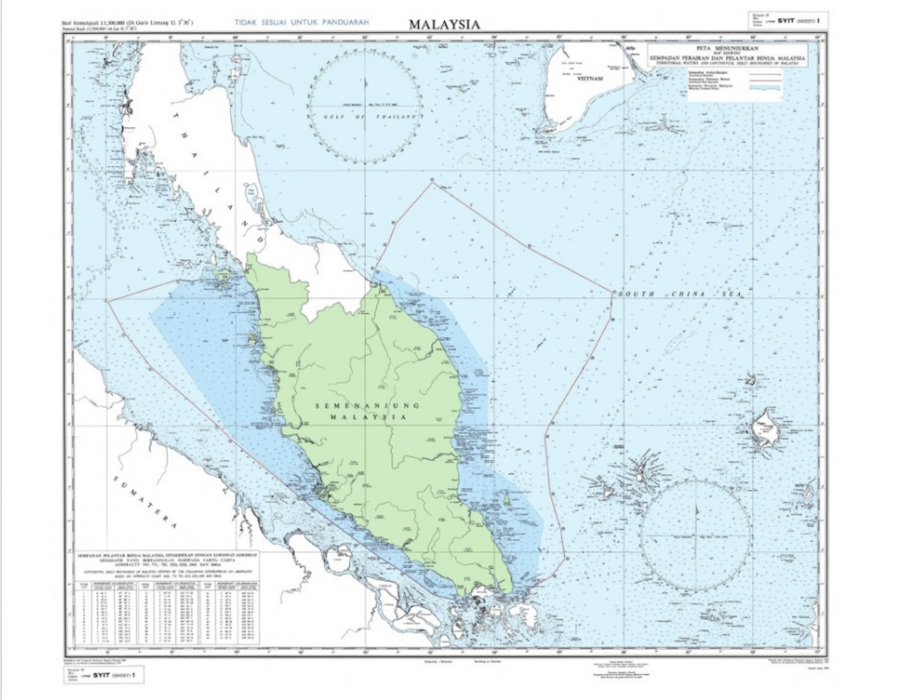 In the past few weeks, several vessels entered with Gard have been detained and fined by the Malaysian Maritime Enforcement Agency  for anchoring in East Johor waters without the requisite permissions from the authorities.

Malaysian authorities recently reportedly conducted a special operation, “Jangkar Haram”, targeting ships that had anchored in waters off East Johor, without prior written permission from the Director General of the Malaysian Marine Department.

In nearly all the cases Gard has handled, mariners had mistakenly understood their anchoring position to be outside Malaysian territorial waters. As our correspondent, Spica, reports in their recent circular these waters are sometimes referred to as Singapore OPL East, or sometimes even International waters.

The Malaysian governing law which sets out the limits of its territorial waters is the Territorial Sea Act 2012 (TSA). To determine if a vessel has entered Malaysian territorial waters, the Malaysian Maritime Enforcement Agency (MMEA) and the Marine Department of Malaysia rely on the “1979 Territorial Waters Chart”. We reproduce an image of this chart from one of our earlier alerts from 2012 on this topic, solely to illustrate the area within which vessels have been detained, which is shaded in blue in the below chart. This area may not be marked on the navigational charts commonly used by merchant vessels and this has contributed to a lack of clarity amongst mariners. As such, vessels are advised to obtain a copy of the Malaysian “1979 Territorial Waters Chart” through their local agents.

All the recent detentions have been under section 491B(1) of the Malaysian Merchant Shipping Ordinance 1952 (MSO). This section stipulates that ships must notify the Director of Marine of activities within Malaysian waters whenever engaging in various activities. The relevant provision in this section under which vessels have been detained by the MMEA is 491B(1)(l) which is a sweep-up provision, requiring approval be obtained for “any other activity as determined by the Director of Marine”. The provision is widely worded, which makes it difficult to challenge.

Malaysian Shipping Notice no. 05/2014 aims to clarify the definition of “any other activity” to include the following: laying up; welding and other hot works; anchoring in a non-anchorage; and any form of underwater operations. The effect of this Notice is that it is now more difficult for owners of detained vessels to argue that they were not aware of the fact that permission was needed prior anchoring.

We have previously also seen vessels being detained by the MMEA for alleged non-payment of light dues. Section 3(1) of the Federation Light Dues Act 1953 requires the owner, agent or master of every ship which visits any port or place within Peninsular Malaysia to pay light dues.

Detention and Statement taking of crew

Once a vessel has been detained, Owners can expect the following investigative steps to be taken by the MMEA:

We understand that the investigation could take anywhere between 1-3 days, or even longer and owners may have to make arrangements, through their local agents, for overnight stay of the Master ashore.

Getting the vessel released

Once statements have been taken from the crew, MMEA will hand the case over to the Marine Department. For the purposes of securing the release of the vessel a hearing may be fixed before the magistrate. Owners usually will be represented by a lawyer at the hearing and will be required to pay a bond to release the vessel under section 413 of the Criminal Procedure Code (CPC). A bond is a security paid by owners for the release of the vessel, as security for a fine or compound to be set at a later date. The bond is paid by a fixed deposit through opening an account under the name of the Court appointed bailor – usually the local agent.

Once the bond is paid and the ship’s documents returned to the vessel, the vessel can be released. Thereafter, a decision can be taken whether to admit liability and pay the compound, i.e., pay a lower penalty in exchange for admitting liability for the charges, or dispute the charges. The maximum fine for each offence is MYR 100,000 (approximately USD 24,000).

The entire process of getting the vessel released can take anything from a few days to a few weeks.

Gard thanks Jeremy Joseph and Matthew Van Huizen of Joseph & Partners for their contribution to this alert.

Shengli refinery started planning the production of low sulphur marine fuel to overcome the downturn in oil markets caused by the COVID-19 pandemic in early 2020.

Bunker operation in Djibouti fully operational and offers all fuel grades according to ISO 8217:2010 specifications.