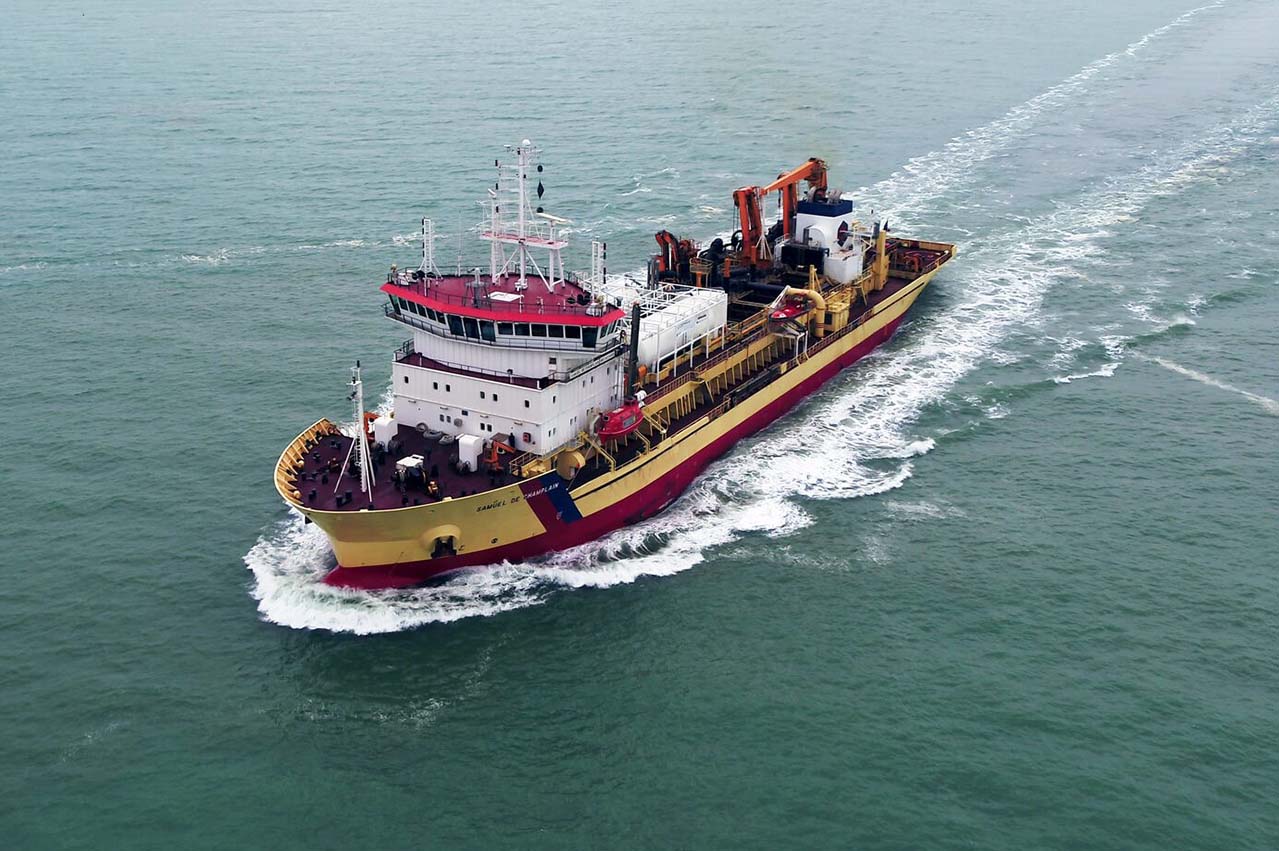 The 117 metre, 8,500m³ trailing suction hopper dredger Samuel de Champlain is owned by Rouen-based GIE Dragages-Ports and operated by the Port of Nantes-Saint-Nazaire.

As with all pioneering projects, the DSDu team encountered and overcame a series of unforeseen challenges from the start.

This included significant revisions to the detailed engineering after a decision was taken to install different engines than had originally been planned. The new engines are considerably larger than those first specified and so DSDu had to completely rethink its methodology, which included the building of an entirely new engine room in their workshop.

A follow-on consequence of that was the need to reassess the interface linking the electrical facilities to the new engines. The cabling was complex and creativity was needed to reduce as much as possible the number of cables needed for the interface.

Also, the new engine configuration resulted in the need for a considerable renewal and extension of all piping. Ultimately, over 25 tonnes of piping were reengineered, fabricated and installed, absorbing extra time and resources especially to accurately fit the new piping to the old.

Even the commissioning required careful thought. As this was the first dredger conversion using this type of propulsion, setting the parameters for the engine performance had to start with fresh thinking and a clean piece of paper.

“We knew at the outset that this project would be a voyage into uncharted waters,” said Mark Jan van den Akker, Managing Director of DSDu.

“We have however acquired much valuable experience along the way that we can apply to future works of this type. It was definitely worth going the extra mile to successfully deliver this ground-breaking project. We hope she will pave the way to greatly reducing the emissions of a class of vessels that typically works close to the shore.”

The Samuel de Champlain was built in 2002 and is the largest vessel in the GIE Dragages-Ports fleet. Based in the Grand Port Maritime of Nantes-Saint-Nazaire, she divides her time between the Loire and Seine estuaries. The conversion project was made possible by a subsidy from the European Commission's Innovation and Networks Executive Agency (INEA) via its Connecting Europe Facility programme.

The conversion of the Samuel de Champlain is intended to demonstrate the feasibility of using LNG as a fuel on smaller vessels as well as allow GIE Dragages-Ports to fulfil its mission of optimising costs via lower fuel bills and less engine maintenance, while at the same time delivering greatly reduced emissions of CO2, NOx and particulate matter emissions.

“We hope that this conversion will demonstrate to other short-sea vessels the benefits of switching to LNG,” said Jean-Pierre Guellec, CEO of GIE Dragages-Ports, “and mark the first stage of the development of an LNG bunkering network on the Atlantic coast of mainland Europe.”

Various stakeholders working together to establish an accreditation process for a LNG bunkering permit.

Company prepares crew for LNG bunkering pontoon operations by the end of this year.

HMD now reviewing other types of vessels for LNG-fuelled application, such as bulk carriers and container ships.